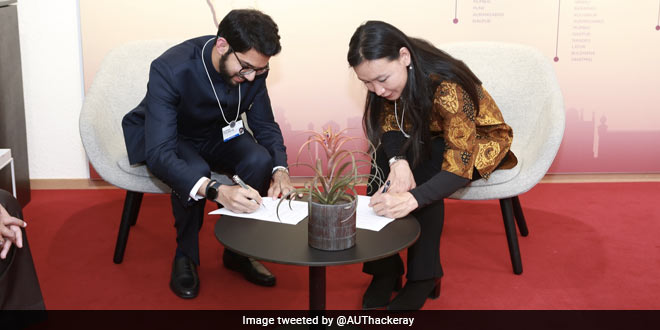 Davos: India’s largest state in terms of GDP and home to the country’s financial capital Mumbai, on Sunday joined the World Economic Forum’s Global Plastic Action Partnership (GPAP) to advance regional efforts to fight plastic pollution. With the new partnership announced here during the WEF Annual Meeting 2022, Maharashtra has joined a growing list of global economies that will leverage the GPAP platform to drive localised solutions for the circular economy.

An MoU signed between @MahaEnvCC & @wef regarding the 'Global Plastic Action Partnership' at the Maharashtra Pavilion.

Maharashtra is now the 1st sub-national government member of GPAP of the @wef. We believe that this is the decade of action!@CMOMaharashtra pic.twitter.com/lusITLboyJ

The announcement follows the fifth United Nations Environment Assembly (UNEA 5), where a resolution was adopted in March 2022 that will hold member nations legally accountable for their contributions to the global plastic pollution crisis.

By joining the Global Plastic Action Partnership, Maharashtra aims to enhance its commitment to curbing plastic pollution, raise its ambition, and ensure accountability and inclusivity throughout the value chain.

The Ministry of Environment and Climate Change of Maharashtra will work with GPAP to launch a National Plastic Action Partnership (NPAP) in Maharashtra as a platform to tackle plastic waste pollution, according to a statement from the WEF.

The GPAP-Maharashtra is the first in India. Maharashtra has an estimated population of 124 million people, larger than countries such as Ethiopia and the Philippines, making this a significant partnership in per capita terms.

“This agreement with the World Economic Forum’s Global Plastic Action Partnership marks a critical juncture in our state’s battle against the plastic pollution endemic,” said Aaditya Thackeray, Minister of Environment and Climate Change for Maharashtra.

Covid proved a hurdle towards our single use plastic ban, where health priorities in PPP took precedent. Now as we refocus on our climate and sustainability objectives, we are laying the foundation to deliver the systems-wide change needed across sectors. This partnership is the building block as we transition towards a more resource circular approach to tackle climate change while strengthening our economy, he added.

The NPAP model creates a circular economy framework for plastics through a locally-led, locally-driven platform. In Maharashtra, it will bring together the state’s most influential policy-makers, business leaders and civil society advocates. This group will deliver a state-level action plan to radically reduce plastic pollution and connect high-potential solutions with strategic financing opportunities.

GPAP is thrilled to partner with Maharashtra to continue their efforts to tackle the plastic pollution problem, said Kristin Hughes, Director of the GPAP.

Related Topics:
Maharashtra Plastic
Up Next