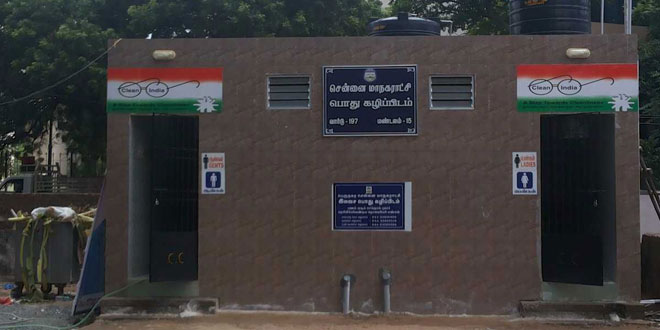 New Delhi: When the rankings for Swachh Survekshan 2017 were released, officials of Chennai’s Greater Chennai Corporation were in for a rude shock, as the city slipped from a respectable rank of 36 in 2016 to 235 in 2017. The city was grappling with the problem of open defecation and more than 500 of the city’s 800 public toilets built over the course of three years, lacked proper water supply and hygiene standards. A year down the line as Swachh Survekshan 2018 is underway in 4,041 cities up from last year’s 434, Chennai’s municipal body has declared all 200 wards of the city open defecation free (ODF). With the declaration, Chennai’s civic body is hopeful that it will secure a better rank in Swachh Survekshan 2018.

We issued a notice and asked people if anyone disagreed with the ODF status. Since we did not receive any response in 15 days, we went ahead with the declaration. This has been possible due to the relentless hard work of the municipal corporation over the past one year, said M. Govinda Rao, Deputy Commissioner, Greater Chennai Corporation.

Chennai’s below par performance in 2017’s Swachh Survekshan was primarily due to the drastically low citizen feedback. The citizens of Chennai gave the municipal corporation 916 out of 2,000 in cleanliness and toilet maintenance, resulting in the city’s low ranking in the survey. Chennai has around 866 public toilets, though the number is low compared to the city’s population, which is nearly 65 lakh. Since last year’s poor performance, the city municipal corporation has constructed nearly 80 public toilets and has managed to revamp more than 500 existing toilets, ensuring proper water supply and regular cleaning in these. This has turned the public sanitation tide in favour of the city, said Mr Rao.

Many of the existing toilets have been fixed as we have repaired water flow systems and engaged people for cleaning them regularly. With around 80 new public toilets, the sanitation scenario has improved in the city and all the councilors have declared their wards ODF, said Mr Rao.

A few city based research organisations are however, not convinced that open defecation has been completely eliminated from Chennai. The research think tank Green Chennai has made a list of some locations around railway stations and highways where open defecation is still prevalent. Lack of functional public toilets in such spaces has resulted in rampant open defecation, says the think tank’s report.

While many public toilets have been built and revamped, it would be incorrect to say that Chennai has become completely ODF. In slum areas near railway stations and near highways open defecation is still visible. Without adequate number of toilets in those areas, how can the civic body go ahead and declare the city ODF? asked Subodh Ravichandran, Data Consultant, Green Chennai.

Arghyam, another Chennai based NGO has also pointed out discrepancies between the municipal corporation’s declaration and the continued presence of open defecation. More public toilets in areas near slums and water bodies will help counter the open defecation pockets, said an official from the NGO.

The Greater Chennai Corporation however, maintained that public toilets are being used by people in all areas and they are confident of getting the ODF certificate from the Centre’s verification team.

47 Million Children In India Reside In Most Polluted Areas: Report