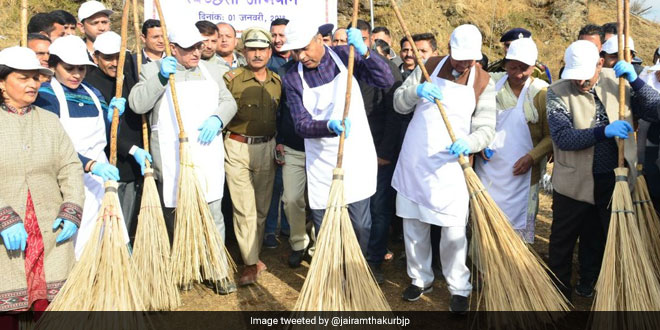 Shimla: Himachal Pradesh Chief Minister Jai Ram Thakur on Monday (January 1) kicked off a cleanliness drive from the state capital under the Swachh Bharat Mission by launching a campaign to clean drinking water reservoirs.  Greeting people on New Year’s day, he said the water tank in Sanjauli town, where the campaign was launched, is the largest in the state with a storage capacity of 90 lakh litres. He said his government is committed to total cleanliness under the Swachh Bharat Mission.

The Chief Minister directed the Irrigation and Public Health Department to undertake a drive to clean water tanks on priority and asked them to undertake the effort twice a year. He also said that the other traditional water sources should also be cleaned regularly.

Noting that, due to the tough topography of the state, people had to often travel long distances to get water, he said:

I assure you that every kitchen and bathroom will have water taps.