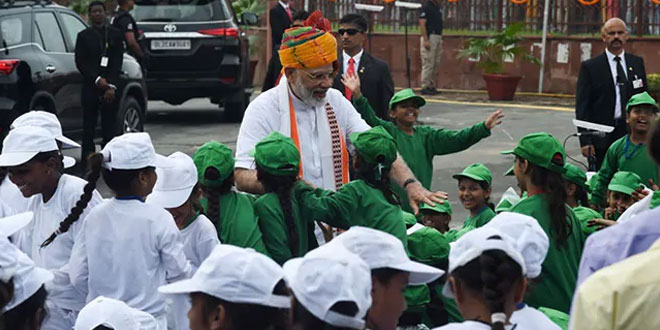 New Delhi: A number of children, who had come to the Red Fort to hear Prime Minister Narendra Modi‘s Independence Day address, stayed back to collect the plastic waste, cups and banana peels strewn around the venue after the event, setting an example for others to follow. Many returned home with the prime minister’s message to cut down on plastic use. Raj Kumar Maurya, who teaches at Rajkiya Sarvodaya Vidyalaya, Yamuna Vihar, said that his students volunteered to collect the waste and waited until after everybody left the venue. He added,

We have been emphasising on reducing the use of single-use plastic in school. Children have a great influence on society. They are doing their bit at home, school and beyond.

Deepanshi Tomar, 15, of Sarvodya Kanya Vidyalaya No. 1, Yamuna Vihar, said students had been asked to collect their used plastic water bottles in a paper bag. She said,

We made sure there was no littering. They were a few spots where plastic bottles and bags lay strewn around but we have collected and put it in the in the bins.

Lakshmi Om Prakash of the school, however, said plastic water bottles could have been avoided. She said non-biodegradable plastic waste choke gutters and drains, pollutes the environment and water bodies, endangering the aquatic life.

Aaditya Baliyan, 15-year-old student of Rajkiya Sarvodaya Vidyalaya and his friends, who were seen collecting empty water bottles in a carton in the sultry weather, said,

The prime minister’s words will serve as an inspiration to everyone. He is leading the cause and people need to do their bit. For it, it is important to make people aware about the devastating effects of plastic waste on the environment and their health.

I really learnt a lot from the prime minister’s speech. He taught us a lot of things and even advised us to do away with plastics and use cloth bags. I will avoid using polythene bags and would also ask my mother to use only cloth bags for her grocery shopping.

Also Read: Heroes Of Swachh India: SWaCH Pune, A Cooperative Of Waste Pickers Is Keeping 1000 Tonnes Per Day Of Waste From Entering Landfills By Promoting Waste Segregation At Source

We got water bottles here but I ensured to dispose them off after because plastic harms our environment. Like the Prime Minister said we should avoid plastic usage

During his address from the ramparts of the Red Fort , Modi appealed to people to take a pledge on October 2 to make the country free of single-use plastic. The PM said in his 92-minute sixth Independence day address,

Can we free India from single-use plastic? Can we take the first step towards this on October 2, I invite industries and start-ups to help recycle plastic.

The PM urged people to shift to cloth bags encouraging shopkeepers to scrap the use of plastic bags. In June last year, the prime minister had announced that India will eliminate all single-use plastic in the country by 2022.