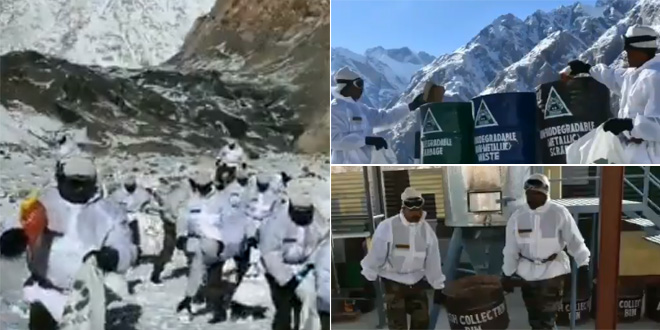 New Delhi: Situated at the at the height of around 12,000 ft in the Karakorum range, Siachen Glacier is known as the highest militarised zone in the world where the soldiers have to battle frostbite and high winds. Braving the harsh cold and treacherous terrain, the army recently undertook plogging, which means picking up trash such as used plastic bottles while jogging or running. The aim of the exercise was to make Siachen area, the world’s highest battlefield, free from all kinds of waste and garbage, especially plastic waste.

As a part of “Swachhta Pakhwada” which is being observed from December 1 to December 15, army officers here at Siachen, undertook a massive plogging initiative wherein we helped clear plastic and other waste items from the glacier.

Explaining the motive behind the swachhata mission, an official added,

Plastic Se Raksha – Swachhata Hi Suraksha – with this as our motto, we wanted to raise awareness in the society to collect plastic waste and make the surroundings clean and better.

Explaining the disposal process of the waste being collected at Siachen, an official said,

Everytime, we collect the garbage here, the first step is to segregate the waste properly, then the waste is incinerated in a fuel-less incinerator, which is used in the greenhouse here and is maintained by Siachen brigade. The incinerator is used to convert non-metallic waste into manure.

Also Read: ‘I Am Not A Hero, Just An Everyday Person Who Is Doing His Bit For The Planet,’ Mantra Of This Marathon Enthusiast Who Has Been Picking Up Trash During His Runs