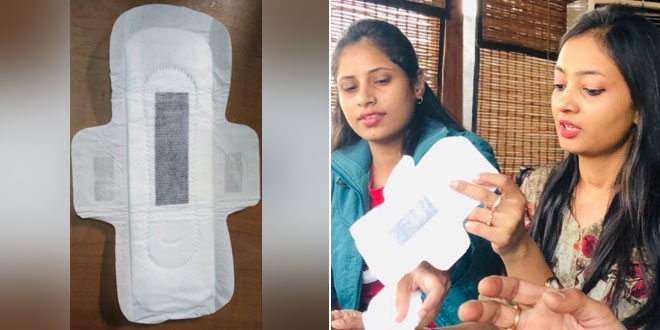 New Delhi: Sanitary products are the fifth most common item found on beaches, more widespread than single-use coffee cups, cutlery or straws, according to a paper published by European Commission on ‘Reducing Marine Litter: action on single use plastics and fishing gear’. The US-based National Research Center for Women and Families estimates that an average woman generates about 160 kilograms of menstrual waste in her lifetime and this is without including packaging of the pads/tampons and applicators. Thus, in a bid to address the environmental degradation caused by plastic waste and to provide a more eco-friendly alternative to the regular pads, RI Nanotech, a startup in Uttarakhand’s Haldwani, has launched biodegradable sanitary napkins which are safer for both women as well as the environment. While talking to NDTV, Rajendra Joshi, CEO, RI Nanotech said,

While several efforts are being made in the country for proper waste disposal and management, yet, a lot of it ends up in our landfills and water bodies. Sanitary pads are one such category of waste that is found most commonly, degrading the environment and spreading pathogens. This is because the popular products in the market have bleached polymer-based material which is not only dangerous for the environment but are also very unhealthy for human bodies. The sanitary napkin produced by us is made from biodegradable material which is also women-friendly.

He further said that his team at RI Nanotech, which is a startup formed to focus on innovative solutions for pressing issues facing the society like plastic pollution and water pollution, has been researching on finding an effective and eco-friendly material for making sanitary napkins for last few months. The team finally settled on Graphene oxide, a form of graphite, to be used as a primary material mixed with other eco-friendly material like bamboo, cotton and other natural herbs. Mr. Joshi said,

The USP (Unique Selling Point) of our sanitary napkin is Graphene oxide which is a wonderful material and has a capacity of holding five time more menstrual blood than regular pads. It not only makes the pad odour-free, it is breathable and thus helps women experience a rash and itch free periods. It is biodegradable which means within it will be converted into fertilizer within three to six months.

While signing off, Mr. Joshi said that the biodegradable sanitary napkin is named by the company as ‘Florish’. The pads will be launched in India and New Zealand by next month. The cost of a pack of 10 pads will be Rs. 50 in India. He asserted that the product has been tried, tested and liked by over 40 women.