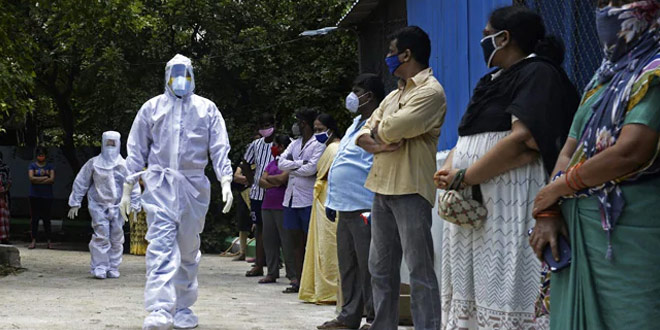 New Delhi: The slide in the number of fresh COVID-19 cases, deaths and positivity rate in Delhi can be attributed to aggressive containment measures, a segment of population achieving immunity and fewer outside patients, experts said on Friday (January 22). Some of them, however, noted that it is hard to “ascertain the actual position” as many people having mild symptoms have been skipping testing. Suresh Kumar, the medical director of Lok Nayak Jai Prakash Narayan Hospital, Delhi’s largest health facility, said authorities have been able to contain the coronavirus spread through aggressive testing and contact tracing. “More than one crore tests have been conducted in Delhi so far. On an average, around 60,000 to 70,000 tests are conducted daily. The Delhi government should be credited for its micro-management and planning,” he said.

The cumulative number of tests in Delhi crossed the one crore mark on January 20. Over 14 lakh tests have been conducted in the city between January 1 and January 21 — 66,683 tests a day on an average. However, Mr. Kumar said that whether Delhi has achieved herd immunity will be clear once the results of the latest serological survey arrive.

According to Dr. Ajit Jain, the nodal officer for COVID-19 at Rajiv Gandhi Super Specialty Hospital, Delhi may have achieved herd immunity already.

The serological-survey conducted in August found that 29.1 per cent of the city’s residents have developed antibodies against COVID-19. Besides, 35 per cent of the population is aged below 18 and is almost immune to the disease, he said.

Exposure to viruses causing common cold can also provide partial immunity against the coronavirus. This is called “cross-immunity”. Around five per cent of Delhi’s population is immune to COVID-19 due to this factor, Jain said. Another reason is that Delhi has become a “natural containment zone” due to the farmers’ agitation on its border points, he said. Earlier, a large number of COVID-19 patients from neighbouring states were coming to Delhi for treatment.

This number has reduced to a large extent due to the difficulty in travel due to the ongoing protest, Dr. Jain said. Around 30 per cent of the coronavirus patients admitted to Delhi hospitals in August last year were from other states, according to government data.

Non-residents also accounted for more than half the number of deaths reported in the national capital between August 3 and August 28 last year, it showed. Dr. Suneela Garg, director and professor in the department of community medicine at Maulana Azad Medical College, said a segment of Delhi’s population achieving immunity could be one of the reasons behind the declining trend in new COVID-19 cases and deaths.

Also, in many cases, people having mild symptoms do not come forward for testing. They go for isolation, she said.

It is hard to ascertain the actual position as many people have not been turning up for testing if they have mild symptoms. They now know what precautions have to be taken, he said.

‘I Feel Safe After Receiving COVID-19 Vaccine,’ Said A Health Worker During PM Modi’s Interaction With Beneficiaries At Varanasi

COVID Vaccination Precautions: Experts Say COVID-19 Vaccines Are Absolutely Safe, However, Those With Allergies Should Avoid