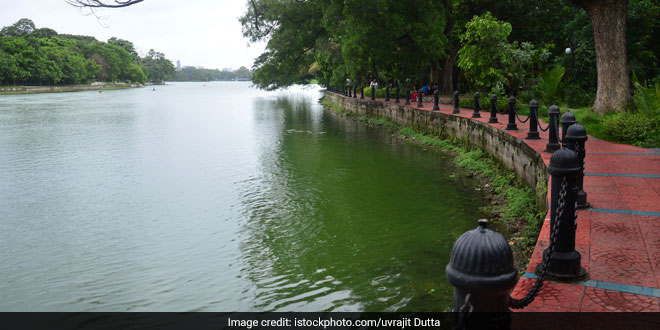 Kolkata: A contempt plea has been filed in the National Green Tribunal, Eastern Bench, urging it to take action over the pollution caused to Rabindra Sarobar lake in Kolkata during last month’s Chhath puja, which the petitioners said was organised in violation of an NGT order.

The petition, filed by Sumita Bandyopadhyay and signed by 1,178 other morning walkers near the lake, contended that thousands of people had assembled at the eco-sensitive zone on November 13 and November 14 and offered puja in violation of an NGT order.

The devotees threw flowers, fruits, sweetmeats and oily substances in the lake, burst crackers and played music in high volume near the 73-acre water body in the heart of the city.

The petitioners said such celebrations were in violation of the November 3, 2017 order of the NGT which had allowed Chhath puja to be performed in the lake that year only.

They said the tribunal had refused to entertain a plea on November 12, 2018 to allow Chhath puja there. The gathering of so many people affected the eco-system of the lake and surrounding areas — which is rich in bio-diversity — and caused environmental degradation, the petitioners said and submitted photographs of the post-Chhath puja condition of the lake to the tribunal.

The petitioners made the West Bengal government and the Kolkata Metropolitan Development Authority, which looks after the maintenance of the lake, parties to the case. The NGT, East Zone, had allowed Chhath Puja at Rabindra Sarobar in 2016 and 2017 for the respective years following a plea by the Rashtriya Bihari Samaj.

The tribunal had issued directions — on both occasions — against bursting of crackers and use of loudspeakers. It had also asked state authorities to ensure that the lake is not polluted by puja offerings. An FIR against unnamed persons was filed by police for violating the NGT order on Chhath puja on November 14 this year.

Rabindra Sarobar is covered under National Lake Conservation Plan of the Government of India. The objective of the plan is to restore and conserve urban and semi-urban lakes degraded due to waste water discharge into the lake.