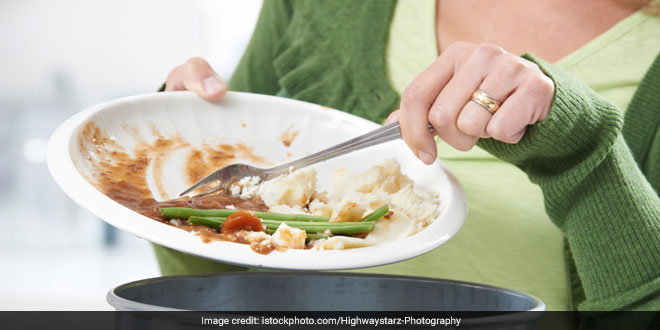 New Delhi: Did you know, people in India waste as much food as the whole of Britain consumes in a year. According to the United Nations Development Programme, up to 40 per cent of the food produced in India just gets wasted. As per a government data, India generates up to 67 million tonnes of food waste annually which if tackled can feed the whole of Bihar for a year. The problem of food waste assumes significance as, according to a report published by the Food and Agricultural Organisation (FAO), every third malnourished child (in the world) is an Indian.

So let’s pledge not to waste food. Here are 5 ideas to help you curb food wastage at home:

1. Purchase As Per Your Requirement
It is the most basic and most important rule to avoid waste of food. Purchase only what you need, this not only saves money but also prevents extra food from getting spoilt.

2. Preserve It Well
Whatever is extra, try store it well to prevent it from rotting. In case of perishables where the shelf life is anyway short, try think of solutions to utilise the extra portions without wasting it. Say you have excess strawberries, you can make a smoothie and relish it after your dinner. Also, while soft or soggy vegetables can be used in soups, fruits can be used in desserts.

3. Share Leftover Food
Cooked too much for the house party? Instead of throwing it away in the dustbin, try distributing the food either among people in your immediate circle or distribute it among the needy near hospitals, railway stations, religious places and so on.

4. Donate To A Food Bank
Helping people in need is one of the greatest things you can do. If you have surplus food and don’t know what to do with it reach out to a food bank. There are several organisations in India like Delhi Food Bank, that are walking the extra mile to curb malnutrition and fight hunger. All you need to do is contact them and they will come to your place, pick up the excess food and distribute it among people in need.

5. Cook With ‘Zero Waste’ As Your Mantra
Test the chef in you by ensuring that no food item or its portions go unutilised. Be it stalk, skin, or leaves try not to discard any part as waste, as these also carry some essential nutrients. Just a little bit of effort and what would have been discarded as waste could well be delectable dish. For instance, cauliflower stem can be used along with florets.

The other option is to make an appetizing stock. Collect the edible scraps like ends of green peas, tomato tops, veggie peels, corn cobs, and freeze them. Then put everything together into a pot of water and bring it to a boil for an hour and you are good to go.

Starvation Free India: “Right To Eat, Not To Waste” As His Objective, This 43-Year-Old Government Employee Provides Food To The Hungry In Mysuru