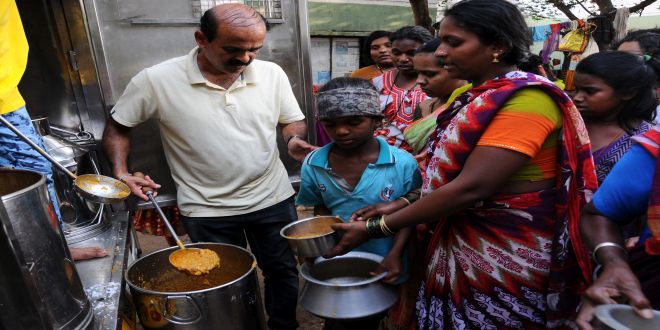 New Delhi: “In 2012, I, along with my family was returning to home after attending a wedding function. Since it started raining heavily, quite few people turned up at the wedding and because of that enormous amount of food was left. While I was leaving, I saw all the excess food being thrown into the dustbin. I don’t know how, but on my way back, I witnessed some street urchins looking for leftover food in the dustbin and eating it. It came as a huge shock to me. I was shattered seeing that at one place where there is plenty of food, people are not eating and here, where there is need, there is no food”, recalls 43-year-old Rajendra, a Mysuru based government employee, while speaking to NDTV.

This particular incident made Mr Rajendra ponder over the state of food wastage in India. He thought of all the food that goes unused during various events, parties and functions like marriages. He decided to bridge the gap between haves and have nots and initiated ‘Akshaya Aahara Foundation’, a non-profit organisation (NPO) with the motto ‘Right to eat, not to waste’. The objective of the organisation was to collect surplus food and distribute it among the needy.

To start with, Mr Rajendra visited different Kalyan Mandapa (marriage halls), restaurants, hotels, party halls, and enquired about food wastage. He asked them about what they do with the surplus food and other related things. Mr Rajendra proposed how they can feed the poor people with just one call.

Each and every individual in Mysuru has our number. All they have to do is, call us and request for a pick up. Our food van reaches the location, collects the surplus food and distributes it among people residing in slums. Sometimes, the caterers provide us banana leaves to serve food on; else we purchase it on our own, tells Mr Rajendra. 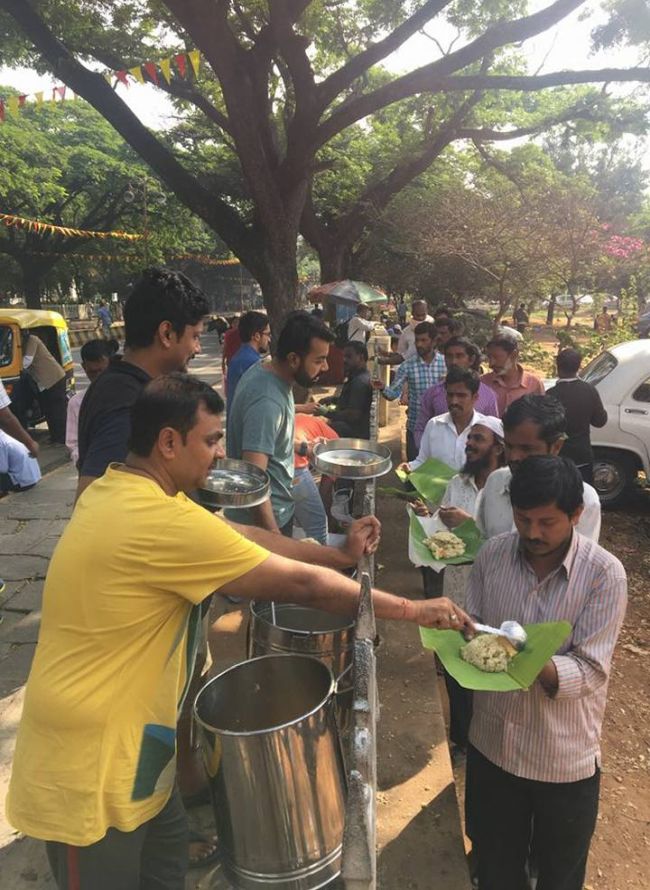 Mr. Rajendra and his team of volunteers have identified 77 slums, 52 orphanages, bus stands, poor colonies, where food can be distributed. With this initiative, the Akshaya Aahara Foundation feeds at least 2,000 people everyday. There have been occasions on which the organisation has distributed 8,000 – 10,000 lunches (meals and dinners) in a single day, during the peak wedding season.

Feeding The Poor: A Bumpy Ride

Talking about the challenges Mr Rajendra faced, he says,

I am a government employee and I have a full time job. I work after office hours and on weekends. Sometimes it becomes difficult to manage both office and NPO, but my family has been a constant source of support in this journey. My wife, Shweta, was working as a librarian, but now she has left her job to manage the food collection and distribution drive. My two kids, one is in the 6th grade and other is in the 3rd grade. They join us on their vacations. We also have a team of volunteers who aid the process. 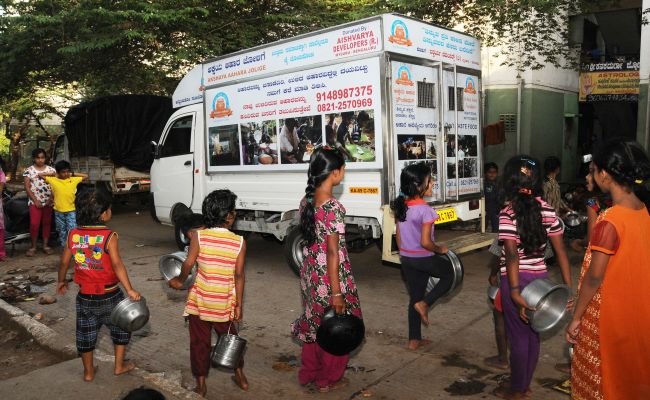 There are times when the team receives calls at odd hours, say 11:30 PM or even after that, depending when an event or a party ends. Then the challenge is to distribute it. At late hours, it becomes tad tough to find people and feed them, but with all the contacts, the team manages that too.

Usually we get pick-up requests post lunch and dinner that is 3-5 PM and 10-12 PM. No matter at what hour we receive a call, we never turn it down. The Akshaya Aahara Foundation works 24×7, says Mr. Rajendra.

The entire process costs Mr. and Mrs. Rajendra Rs. 55,000-60,000 a month. The operational cost includes the salary of food van driver, assistant which is Rs. 10,000 and Rs. 8,000 respectively. While fuel costs around Rs. 3,000, maintenance of vehicle, mobile phone rentals adds up to Rs. 5,000. Along with this, the NPO has rented out a small place which works as office-cum-home for drivers and assistants. 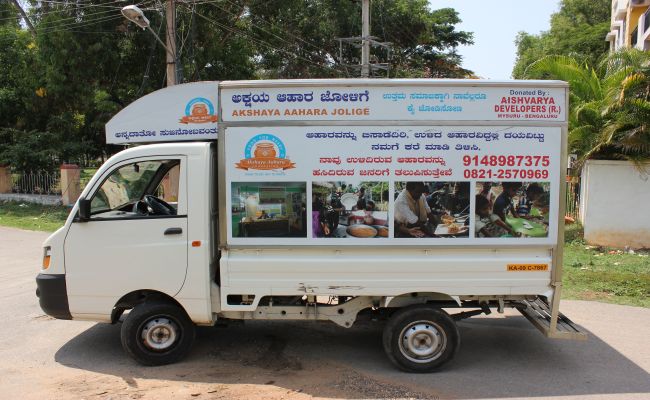 Initially, we used to get only a couple of requests, but now we receive 50-60 calls everyday. The number increases during marriage season. Our goal is to create hunger free, starvation free India. In that direction, the first step is to make Mysuru hunger free. When Mysorians will become aware, they will take forward the message and then Karnataka will walk on the same path and then entire India will adopt it, signs off Mr Rajendra.

An Innovation To Prevent Waste From Flowing Into The Sea, Rivers And Lakes, Can This Solve Water Pollution Problem?