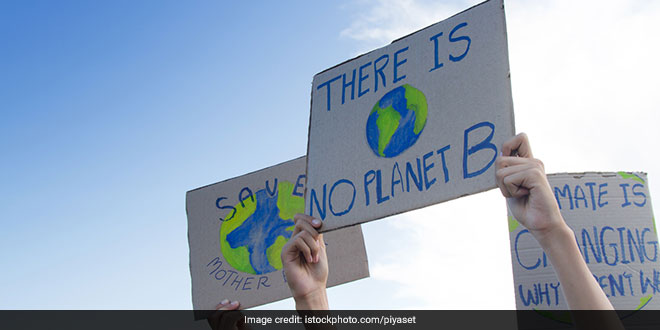 As the world leaders are set to participate in COP26 to decide on the next step on the challenging climate change matter, they have to remember that the world is in the midst of a climate breakdown. We are witnessing the worst extreme weather events; cyclones, floods, heatwaves, heavy rainfall, and drought. All these extreme climatic events have become more devastating, and frequent in many parts of the world. Unfortunately, south Asian countries including India are on the frontlines of these extreme weather events. In many parts of India, we have already crossed the ‘safe limits’ of air, water and soil quality. Our air, water, land, forest, coasts, and cities are facing multiple challenges due to climate change. The first national report on the state of the climate crisis called ‘Assessment Of Climate Change Over The Indian Region’ revealed that India’s average temperature has increased by 0.7 degrees celsius between 1901-2018. India is facing extreme climate events at regular intervals. Based on the long-term data and extensive research, scientists are linking these extreme weather events to human-induced climate change. It is not only impacting nature but it also has a huge impact on human health and the economy.

Big emitters hiding behind the poor

Though this is an undeniable fact that anthropogenic climate change has a huge influence on extreme weather events, we should stop calling this a “human-induced” crisis when we know the fact that just 100 polluting producers are responsible for around 70% of global emissions. It is the rich countries and classes that have been historically responsible for emissions growth and they need to change their business and lifestyles if we are ever to tackle climate heating. We need to acknowledge that in society the most vulnerable communities are paying a higher price for impacts of climate change than the rich when they are not guilty of it in the first place.

Strong commitment on phase out from fossil fuel

While most of the governments and big corporations talk a lot about climate change on global platforms like COP, their actions proved that they are just making empty promises. This needs to change in COP26. Many activists already flagged that COP26 is going to be our last hope to achieve the ambitious goal of limiting global temperature rises to 1.5C. After the Paris Agreement in 2015, it is going to be the biggest political opportunity for world leaders to show their strong commitment to tackling the climate breakdown.

The burning of fossil fuels has already caused huge environmental, economic, and health damages. It is one of the major contributors to greenhouse gas emissions and air pollution. World leaders must have to understand that development cannot continue on dead (fossil) fuels anymore, especially when science has already brought sustainable alternatives to our doorstep. Today, renewable energy is much cheaper than polluting fossil fuels. Renewables would not only ensure secure green jobs, but it would also help us to get energy sovereignty and sustainable energy for all. All countries must stop funding new fossil fuels projects both at home and abroad, ensure just energy transition to clean and renewable energy sources, and support other countries to do the same. While ensuring the 100% renewable energy transition, the phase-out plan must secure the rights of workers and affected communities including job security, healthcare, and other social security.

To keep the temperature below 1.5C, the world leaders need to set ambitious emissions-cutting plans to halve global emissions by 2030. The Glasgow summit is going to be an important opportunity when the governments can show their commitment by announcing their ambition to cut emissions and this announcement should have real tangible plans to meet the target.

In relative terms, India has made promises to move towards clean energy. Recently the country crossed 100GW installation of renewable energy while 50GW is under installation, and 27 GW is under tendering. In the solar sector, it is taking a leadership role by institutionalizing the International Solar Alliance that supports developing countries to increase their solar capacity. But at the same time, the country has not committed to any absolute emission reduction target or even given a clear date for fossil fuel peak. As of September 2021 coal still accounted for nearly 50% of the total installed capacity in power generation.

As part of the Covid19 recovery plan, the government opened up its coal mining sector for private players and announced many new coal mines for auction. This new investment planned for coal power plants is likely to adversely impact the progress towards clean energy. Ideally, these investments should be for renewables. In the light that coal is increasingly becoming economically unviable and the cost of renewables continues to drop we need to phase out of coal soon. Along with increasing clean energy share, India must put a moratorium on new coal. It should encourage more investments in the renewable energy sector and disincentivize investment in fossil fuels.

India can set the example by announcing a just energy transition plan to phase out fossil fuels in line with the 1.5C goal. It also means that no new subsidy to the fossil fuel industry and stronger national climate plans (NDCs) goals. India should invest in its own R&D to develop clean air technology.

While assessing the economic cost of fossil fuels’ phase-out plan, there is a need to include the climate crisis-driven cost of public health, economic losses, and ecological and resource security of the country. India is already paying the huge economic cost of climate breakdown. According to the Global climate risk index 2020, India suffered an absolute loss of $37 billion due to climate change in 2018. Even the recent RBI study reveals a direct casualty between extreme weather events and per capita GDP growth. It mentioned that “A persistent increase in temperature in India in the absence of risk-mitigating policies can cause the per capita GDP to reduce by 6.4 percent by 2100”

It is clear that the developed countries have already failed us. The lack of commitment and leadership from the global north is evident. India should take leadership by taking real climate action and no false solution. It will be a win-win situation for both the Indian economy and the climate.

Songs Of The Earth, Indian-Origin Artist’s Climate Action Film To Premiere At COP26