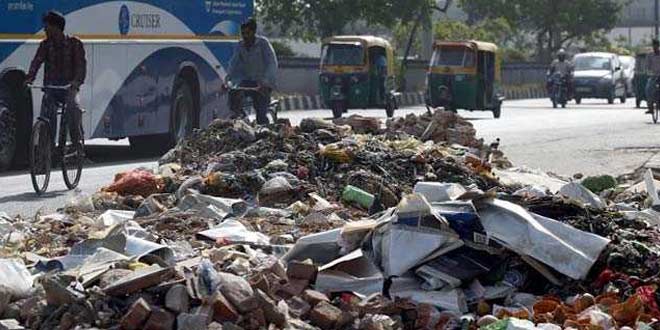 Aurangabad: Aurangabad in Maharashtra was in news last week when police allegedly lathi-charged protesters opposing dumping of municipal garbage at a village on the city’s outskirts. On the morning of March 17, however, the city witnessed another police operation: a team led by in-charge police commissioner Milind Bharambe collecting garbage from various locations. As the city administration is grappling with the issue of garbage disposal for want of alternative site, Mr Bharambe and his team did a round of the city and collected the waste.

Tension prevailed at Mitmita village on the outskirts of the city last week when villagers tried to stop municipal trucks from dumping garbage at a site in the area.

It was alleged that police dealt with the protesters in a high-handed manner, which led to police commissioner Yashaswi Yadav being sent on compulsory leave.

The city has been facing a crisis-like situation ever since the villagers of Naregaon, where the municipal garbage was being dumped for the last three decades, said they would no longer allow it.

It was our contribution to finding solution to the problem. We appeal to the citizens to segregate the waste. It must start from every house and every person should contribute.

Mr Bharambe decided to undertake the initiative after holding a meeting with police officials yesterday.

Initially, we hesitated, thinking how can we collect garbage while in uniform. But when the commissioner himself started doing it, it inspired everybody.

Related Topics:
Garbage Maharashtra
Up Next