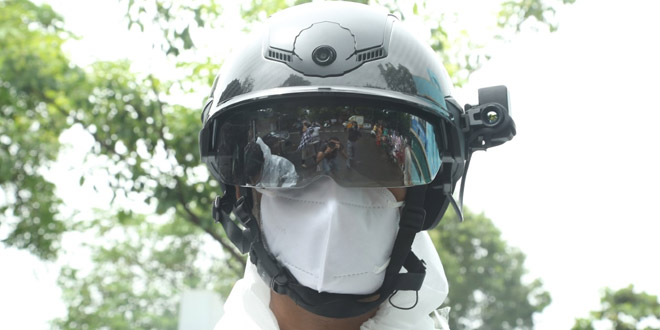 New Delhi: With an aim to speed up screenings and detect suspected cases in Mumbai, one of country’s worst-hit cities by the COVID-19 pandemic, Brihanmumbai Municipal Corporation (BMC) has started using ‘Smart Helmets’ which take only a few seconds to accurately scan temperature of a large number of people. According to an official of BMC, with quick thermal screenings being considered as one of the ways to identify suspected COVID-19 patients, the technology is proving to be useful in densely populated slum areas and containment zones of Mumbai.

While talking to NDTV about the experience of using ‘Smart Helmets’ in parts of Mumbai, Sanjog S Kabre, Assistant Municipal Commissioner of Brihanmumbai Municipal Corporation said,

Currently, BMC has two smart helmets which were donated by NGO called Bharatiya Jain Sanghatana. We have started using the smart helmet in various Slum Rehabilitation Buildings. These buildings have 1 BHK (Bedroom Hall Kitchen) flats but are home to large families. At least 10 people stay in one house. This gadget expedites the screening process. With Thermal Gun we could not cover more than 100 people in one hour and takes time to screen the people. With the help of this helmet, we are everyday screening approximately six thousand people. All you have to do is ask people to come out of their homes and face towards them. The gadget will then screen them within seconds. Till date, we have screened more than 30,000 people using smart helmets of which almost 200 people were detected as suspected patients who were then sent for COVID-19 testing. Out of these 200, 25 tested positive.

He further added that this technology is being used in the country for the first time in Mumbai and will be soon be expanded to Pune and other parts of Maharashtra.

How Does A Smart Helmet Work?

To learn more about the technology, NDTV reached out to Bharatiya Jain Sanghatana (BJS), a non-governmental organisation based in Pune that has been working in the areas of disaster response, health and education. According to Shantilal Muttha, the founder of BJS,

Right after COVID-19 pandemic hit India, we started looking for various ways to contribute in the efforts to contain the spread of the virus. During the same time, we were also researching on how other countries are responding to the pandemic. We came across this technology and found that countries like China, Itlay and United Arab Emirates have been using it as part of their containment efforts. We decided to get these high-tech smart helmets for India. My son helped us in this quest. He helped us connect with a Chinese firm and we bought four smart helmets from it. We have given two helmets to BMC and the remaining two will be given to Pune authorities soon.

He explained that a smart helmet is basically a portable thermos-scanner that can screen approximately 200 people in one minute. A smart helmet is equipped with two cameras, one camera records the video of a person and side camera which is a thermal camera records the body temperature of a person. The helmet has the capacity of capturing the temperature of 13 people together at any given point of time. Anybody wearing a smart helmet can read the body temperature can read the temperature of people in the crowd accurately in real-time from a distance of up to 10 feet, he said. These devices will prove to be even more useful when more people will start coming out when normalcy returns in the country. The helmet can be connected via the internet to a mobile phone or a computer. The cost of this one helmet is approximately Rs 6 lakh and it can store the 64GB data, said Mr. Muttha.

Mr. Kabre said that mass screening drives conducted using smart helmets are coupled with testing and medical check-up camps in the area assigned for the day. He said,

A team of about 5 people including the person wearing the smart helmet roam in the building or area screening the people via the thermal camera installed on the helmet. If they find someone who has a temperature higher than 36.5°C to 37°C recommended by the World Health Organisation (WHO) as normal, they are immediately taken to the camp for the swab test and providing medical help.

According to Mr. Kabre, BMC is planning to procure more smart helmets for speeding the screening further and ultimately use it as a mass screening tool after the economy is restarted to ensure safe movement of people in public places.

Highlights Of Mumbai Sero-Survey: 57% Of Those Surveyed In Slums Have Had COVID-19, 16% In Other Areas