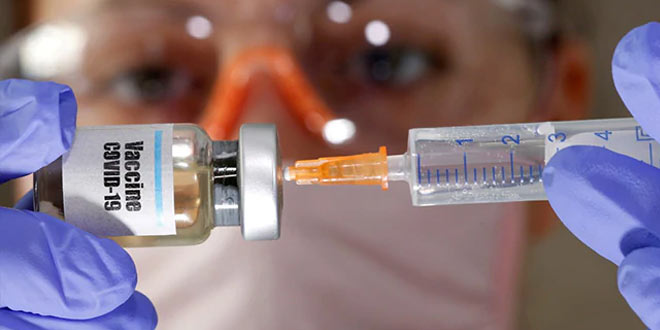 New Delhi: The preliminary data of the COVID-19 candidate vaccine developed by the University of Oxford has shown encouraging results in first stage of the vaccine development. The study titled ‘Safety and immunogenicity of the ChAdOx1 nCoV-19 vaccine against SARS-CoV-2: a preliminary report of a phase 1/2, single-blind, randomised controlled trial’ revealed the findings of the human trial of the vaccine and was published in the medical journal The Lancet on Monday. According to the study, early human testing of Oxford University’s vaccine called ChAdOx1 nCoV-19 found that it produced expected immune responses and was safely tolerated by the subjects during the trial.

The Lancet study says that Oxford’s candidate vaccine is made from a harmless chimpanzee virus. The human trials of ChAdOx1 nCoV-19 vaccine that began in April this year involved 1,077 healthy adults aged between 18 and 55 in five hospitals in the United Kingdom. The study found that after receiving the injection, the immune system of the volunteers was triggered which led to the making of antibodies and white blood cells called T-cell specific to antigen or the substance carried by coronavirus. It was also found that after two doses of the vaccine, administered at an interval of 28 days, potent immunogenicity, which is the ability to induce immune response to foreign substance such as an antigen was present in all the participants studied. The results show that the vaccine could induce immune responses for up to 56 days after being injected.

Our preliminary findings show that the candidate ChAdOx1 nCoV-19 vaccine given as a single dose was safe and tolerated. No serious adverse reactions to ChAdOx1 nCoV-19 occurred. The majority of adverse events reported were mild or moderate in severity, and all were self-limiting.

Explaining about the immune responses produced by the ChAdOx1 nCoV-19 vaccine Padma Shri Awardee, Dr KK Aggarwal, President, Confederation of Medical Associations in Asia and Oceania (CMAAO) and Medtalks, Heart Care Foundation of India who has been involved in the treatment of over 2,000 COVID-19 patients in Delhi said,

It is first important to understand the functioning of a vaccine. Think of the virus as a terrorist and body’s immune system as the Police. Vaccination is simply a mock drill for this Police. This means that body is injected with some other virus similar to the virus in consideration or an artificially generated synthetic virus or the virus itself but in a neutralised form. This triggers body’s immune system to use its weapons and activates the humoural immunity which forms antibodies specific to the foreign substance or antigen that has invaded the body. Some vaccines trigger the immune system to call its reserved force, the T-Cells. These are White Blood Cells that have the ability to recognise the antigen on being encountered again and help in producing antibodies that can kill those specific antigens. It also has the capacity to kill bad or infected cells. T-cells are crucial for maintaining protection against the virus for years. Some vaccines have the capacity to induce both, humoural immunity as well as the T-Cell immunity. Oxford’s COVID-19 vaccine candidate is the latter kind. It has been able to induce both kinds of immunity.

However, Dr Aggarwal also added that while the findings are seen as promising, it is too soon to know if this is enough to offer protection to the people against the virus. He said that it has been only three months since the vaccine was administered among the volunteers and it is still not known how long the immunity would last. He said,

During the early trials the Oxford researchers found that by giving a second dose, the immune response was better. However, it is still not clear if this is enough. So, how much dose is required is not known. There is also a need to watch out for the post-vaccination impacts till at least one year. We must wait till the phase three result come which is currently being conducted on volunteers in Brazil, South Africa and the UK and probably soon in India, before there is any decision on which of the multiple vaccines under development can provide maximum protection.

The vaccine is still undergoing the phase II and III of clinical development as per the study report. In these phases, older age groups with comorbidities, health-care workers, and those with higher risk for SARS-CoV-2 exposure are being recruited and assessed for efficacy, safety and the ability to induce an immune response after the vaccine is given to them. The researchers will also evaluate the vaccine in children, once sufficient safety data has been accumulated in adult studies. Professor Sarah Gilbert, co-author of the study said,

There is still much work to be done before we can confirm if our vaccine will help manage the COVID-19 pandemic, but these early results hold promise. We still need to learn more about the virus. We still do not know how strong an immune response we need to provoke to effectively protect against SARS-CoV-2 infection. If our vaccine is effective, it is a promising option as these types of vaccine can be manufactured at a large scale.

The University of Oxford has partnered with the UK-based global bio-pharmaceutical company AstraZeneca for further development, large-scale manufacture and potential distribution of the COVID-19 vaccine. In India, Serum Institute of India (SII), the world’s largest vaccine manufacturer, has taken up the charge of producing the vaccine being developed by Oxford University and AstraZeneca. It will be called as Covishield in the country. According to Adar Poonawala, CEO, SII, it is most likely to be launched in the country by November this year.

According to Centres for Disease Control and Prevention (CDC), a national public health institute in the United States, the development cycle of a vaccine includes following seven stages:

1. Exploratory stage: This is a research-intensive phase to identify natural or synthetic antigens- a substance that causes the immune system to produce antibodies, that might help prevent or treat a disease by inducing immune responses

2. Pre-Clinical stage: During this phase, researchers conduct animal testing to determine whether the candidate vaccine will produce immunity

3. Clinical development stage: This stage is a human trial stage and includes three-phase process. During Phase I, small groups of people receive the trial vaccine. In Phase II, the clinical study is expanded and vaccine is given to people who have characteristics (such as age and physical health) similar to those for whom the new vaccine is intended. In Phase III, the vaccine is given to thousands of people and tested for efficacy and safety.

4. Regulatory review and approval stage: If a vaccine passes through all three phases of clinical development, the vaccine developer submits applications for license and approval with the health authorities.

6. Manufacturing stage: In this stage, vaccine manufacturers provide the infrastructure, personnel and equipment necessary to create mass quantities of vaccines.

7. Quality control stage: This stage involves tracking the immunisation and see whether the vaccines is performing as anticipated.

Apart from the Oxford University’s product, there are more than 100 vaccine candidates under various stages of development across the world, according to the World Health Organisation (WHO). Some of these include, American biotech company Moderna’s COVID-19 vaccine of which the phase-I findings of human trial were published recently prompted neutralising antibody activity, though minor side effects were observed in many patients. China’s CanSino coronavirus vaccine is currently under phase-III trial in Bangladesh and has shown positive results in Phase-I and II, according to Dr. Aggarwal. India’s COVID-19 vaccine candidate Covaxin developed jointly by Bharat Biotech and Indian Council of Medical Research (ICMR) has recently started phase-I of the human trial. Other firms in the country like Serum Institute of India, Zydus Cadila and Indian Immunologicals Limited are also involved in developing a vaccine with an aim to help end the pandemic.