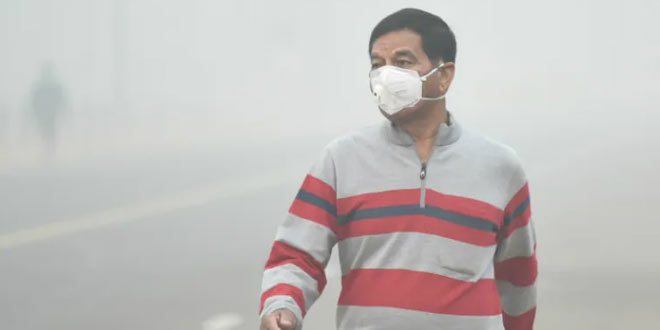 New Delhi: Wearing a mask for an entire day in these COVID times is not easy as one eventually does have a problem in breathing properly, but this issue has now been looked at by the makers of the Kurin City Cleaner, the Air Purification Smog Tower as they have introduced the first air purification mask in the world, known as Kurin Atom Ver 2.0.4. Talking about this mask, Pavneet Puri, the co-founder at Kurin systems told ANI, “Basically, when you wear a usual mask-like N95, what happens is every time you exhale the air, it does not entirely escape the very second, all of these N95 masks are so tight, no particle can pass, to avoid the breathing issues, what we have done is that there is a motor with a fan right in front of the mouth, then the filter is there.”

Also Read: Single Person Driving A Car Or Doing Exercise Does Not Have To Wear Face Mask: Health Ministry

Following this, LG had also announced their own portable air purifier that people can wear on their face like a mask, the Verge had reported.

LG’s mask known as “PuriCare Wearable Air Purifier” will be using a pair of replaceable filters similar to what users are used to finding in LG’s range of air purifiers for the home and it will be paired with battery-powered fans to help the customers breathe.

When asked whether the company got the approval from ICMR regarding Kurin Atom Ver 2.0.4, Mr. Puri said,

We do not require ICMR approval, we require BIS (Bureau of Indian Standards) approval, as it is an electronic device, it is more of a portable air purifier, it necessarily does not qualify as a mask. We have been selling the mask since February this year.

Mr. Puri, also said that the first Kurin Atom was released in 2017, but at that time, it was just a portable air purifier and the kids did not want to wear the mask initially because of its design.

Basically we released the first Kurin Atom in 2017. What that mask did was that it was portable air purifier, whenever you wanted, with a hole you could connect the mask and the air would go directly to your mouth. The kids initially did not want to wear it as it looked a bit funny so we had to change the design, Mr. Puri told ANI.

However this time we worked on the exhaust and ventilation of the exhaled carbon dioxide as well. The exhaled air is also filtered so as to not let any aerosols be exhausted, which is the biggest concern at the moment, he concluded.

The Kurin Atom comes fitted with the State-of-the-Art miniature motor and fan that helps in the intake of clean air. In the first step of the process, the air is sucked in through the front of the mask making it pass through the four layers of filteration (Consolidated Filter).

The layers include; pre-filter for visible and bigger particles i.e PM 10 and above, dust, pollen, pet dander, smoke, etc; Bacterial Filter for protection against viruses and bacteria (nano grade filtration); HEPA H14 Filter, the highest grade of HEPA usually used to create clean rooms in hospitals and other medical facilities, responsible for capturing 99.99 percent of all pollutants even PM 2.5, gives protection up to 0.3 mm.

The mask is also being widely provided to hospitals for helping patients exhibiting mild breathing difficulties and is helping in recovery from lung disorders.

Also Read: Should You Wear Mask While Exercising In The Wake Of Coronavirus Pandemic? Experts Explain