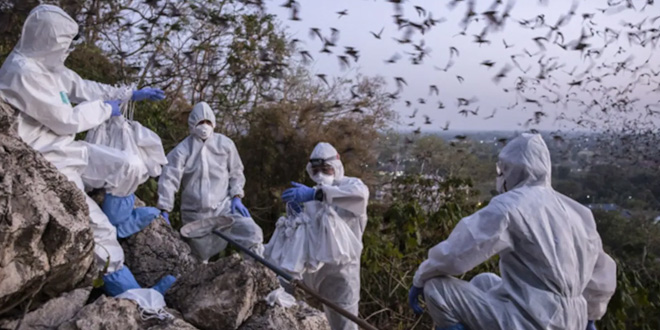 New Delhi: Exactly two years ago, on March 11 2020, the World Health Organization (WHO) declared COVID-19 a global pandemic. This was about two months after China first reported the cases of SARS-CoV-2, the virus that causes COVID-19, in Wuhan province. The virus quickly travelled around the world and caused a major global health crisis. The virus, that is said to have originated in bats and spilled over to the human population, has so far infected more than 45.3 crore people worldwide and caused the death of over 60.3 lakh people across the globe. According to scientists, there is still the potential for new and more severe variants to hit humans.

The World Health Organization has stressed that steps need to be taken to stop Covid and reduce the risk of transmission between animals and humans. It has said that although the COVID-19 pandemic is driven by human-to-human transmission, the SARS-CoV-2 virus is also known to infect animal species. According to WHO, the current knowledge indicates that wildlife does not play a significant role in the spread of Covid in humans, but spread in animal populations can affect the health of these populations and may facilitate the emergence of new virus variants. WHO said,

It said that to date, farmed mink and pet hamsters have been shown to be capable of infecting humans with the SARS-CoV-2 virus and a potential case of transmission between white-tailed deer and a human is currently under review.

Although the #COVID19 pandemic is driven by human-to-human transmission, the SARS-CoV-2 virus is also known to infect animal species https://t.co/csdRSMrvk4 https://t.co/hcI0GyOG8D

Sounding a warning regarding the new variants of the coronavirus that might infiltrate more species and be transmitted to humans in even large numbers, Maria Van Kerkhove, WHO’s Technical lead for COVID-19 took to Twitter and said,

We must all take steps to reduce the spread of SARS-CoV-2 and reduce the risk of transmission between animals and humans.

We must all take steps to reduce the spread of SARS-CoV-2 and reduce the risk of transmission between animals and humans.

Together we can end the #COVID19 pandemic.@WHO @FAO @OIEAnimalHealth https://t.co/LuV9WjdTQ9

Here are the steps recommended by the WHO to ensure that animal to human transmission does not happen:

Two Years Of COVID-19 As A Global Pandemic, Here’s What Experts Say On Way Forward