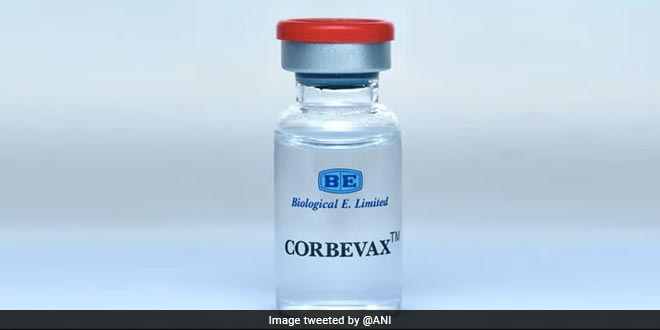 New Delhi: The Drugs Controller General of India has granted restricted emergency use authorisation (EUA) to Biological E’s COVID-19 vaccine Corbevax for the 12 to 18 years age group, subject to certain conditions, official sources said on Monday.However, the government has not taken a decision yet on vaccinating those aged below 15 years.The health ministry recently had said additional need for vaccination and inclusion of population for vaccination is examined constantly.The DCGI’s approval comes after the Subject Expert Committee on COVID-19 of the CDSCO on February 14 recommended granting restricted EUA to Corbevax for the 12 to 18 years age group after deliberating on Biological E’s application.The Drugs Controller General of India (DCGI) had approved Corbevax, which is India’s first indigenously developed RBD protein sub-unit vaccine against COVID-19, for restricted use in emergency situations in adults on December 28.It has not been included in the country’s vaccination drive.

The DCGI on Monday granted restricted EUA to Corbevax for the 12 to less than 18 years age group subject to certain conditions,” an official source said.

In an application sent to the DCGI on February 9, Srinivas Kosaraju, the head of quality and regulatory affairs at Biological E Limited, had said the firm had received approval for conducting phase 2/3 clinical study of Corbevax among children and adolescents aged 5-18 years in September.Based on the no-objection certificate, Biological E has initiated the clinical study in October 2021 and has evaluated the available safety and immunogenicity results of the ongoing phase 2/3 study, which indicated that the vaccine is safe and immunogenic.

The proposed application is for obtaining permission for restricted use in an emergency situation in adolescents aged 12 to less than 18 years based on interim results (of the ongoing phase 2/3 clinical study) considering the current pandemic and widespread of COVID-19 vaccine in India, Kosaraju had said in the application.

The Corbevax vaccine is administered through the intramuscular route with two doses scheduled 28 days apart and is stored at two to eight degrees Celsius temperatures and presented as 0.5 ml (single dose) and 5 ml (10 doses) vial pack.According to the health ministry, the company has conducted phase 1/2 and 2/3 clinical trials of its COVID-19 vaccine in the country.Further, it has conducted a phase 3 active comparator clinical trial to evaluate superiority against Covishield vaccine, it said.

Best Out Of Waste: Indore Artist Makes Art Out Of Trash, Urges People To Reduce, Reuse And Recycle

COVID-19: Here Are The COVID Free Countries In The World, As Per WHO