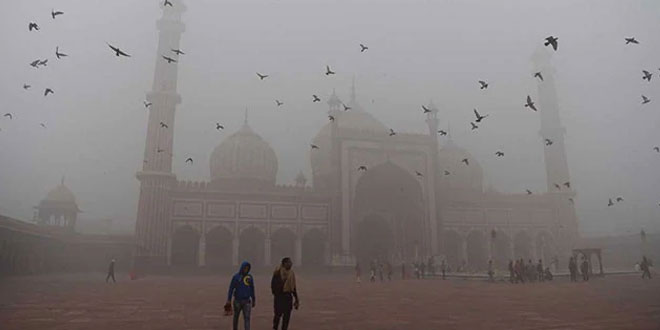 New Delhi: A thick haze engulfed the national capital on Tuesday as the air quality remained in the “severe” category due to the unfavourable meteorological conditions such as low wind speed. Authorities expressed concern that light rainfall in the city may worsen the pollution levels.

Such isolated showers often aggravate air pollution post event unless the spell is longer and widespread. It introduces a lot of moisture in the air and makes it heavy to hold more particulate matters, a Centre-run System of Air Quality and Weather Forecasting (SAFAR) report said.

The Supreme Court appointed Environment Pollution Control Authority (EPCA) on Monday, warned about imposing a complete ban on the use of non-CNG private and commercial vehicles in Delhi, if the air quality continues to deteriorate.

In the scenario that the weather remains adverse and that the current situation of air quality remains in ‘very poor’ or ‘severe category’ then there is no option but to direct for a complete stop on the use of private and commercial vehicles other than those plying on CNG so that pollution can be contained, read a letter written by the EPCA chairman Bhure Lal to the Chief Secretary of Delhi.

The stubble-related impact will continue to remain nominal due to slow transport height winds, a statement by SAFAR said.

Meanwhile, the ban on the entry of heavy vehicles, which was imposed from November 8 till November 11, was extended by a day by the EPCA, on the recommendations of a CPCB-led task force.

Over 2,200 vehicles were returned from Delhi’s borders during the four-day restriction, from November 8 to November 12, on the entry of heavy vehicles in the city, a senior Traffic Police official said.

EPCA, anticipating the situation getting out of hand with the owners of over a 1,000 trucks getting agitated, allowed entry of the stranded vehicles at the Delhi border into the city, while exempting them from paying toll or Environment Compensation Charge (ECC) from 11 pm on November 12 to 7 am on November 13.

By relaxing the payment of toll-ECC, the trucks can move without any stop which will reduce congestion and reduce pollution. The SDMC is directed to issue the necessary orders so that no ECC or toll is collected for this limited period, said Mr. Lal in the letter.

The EPCA, however, restricted the entry of “new trucks” in the national capital owing to the deteriorating air quality.

It has also permitted construction activities only during the daytime from 6 AM to 6 PM due to poor dispersion of pollutants at night.

Mr. Lal in the letter also pointed out that Haryana and Uttar Pradesh have been unsuccessful in the vehicle sticker implementation, without which it is not possible to differentiate between diesel and other fuelled vehicles.

CNG vehicles have stickers and also it is understood that all public transport vehicles are fuelled by CNG, in this situation, only these vehicles will be available for movement, he said.