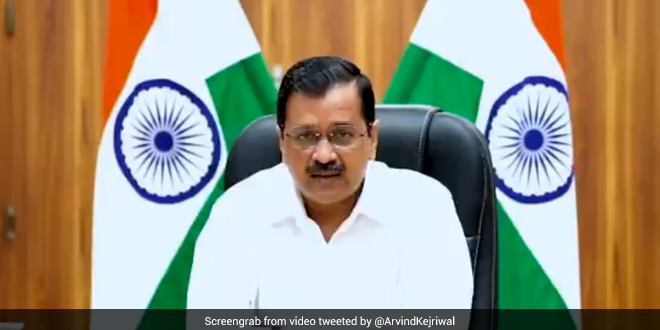 New Delhi: Amid the rising levels of pollution in the national capital Delhi, Chief Minister Arvind Kejriwal on Thursday (October 29) launched ‘Green Delhi’ mobile application. The app enables users to file complaints related to pollution causing activities. With the launch of the mobile application, the Delhi government plans to involve citizens in the fight against air pollution. The application is a part of the Delhi government’s mega anti-air pollution campaign “Yudh Pradushan ke Virudh” (War Against Pollution) launched on October 5. Speaking at the launch of the mobile app here in Delhi, Chief Minister Kejriwal asked Delhiites to support the government in tackling air pollution. He said,

Our aim is to include citizens of Delhi in our war against air pollution. A government cannot bring any change without the support of its citizens.

CM Kejriwal further explained the Green Delhi application, from where it can be downloaded and how one can use it to lodge a complaint about violations of anti-pollution norms. CM Kejriwal informed that the app is currently available for Android users and can be downloaded from the Play Store for free. He added,

You can file a complaint regarding any kind of air pollution violation. For example, if you witness industrial pollution or industrial dust or a pile of waste on fire, you can upload its video, picture, or even audio. Using Google maps, the mobile app will automatically fetch your location and alert us about the same. Your complaint will reach the concerned department and it will be resolved within a stipulated timeframe. We have specified timeline for each department. Once the complaint is resolved, the concerned department will update the complainant on the app with a photo or video. If the user is not satisfied, he/she can reopen the complaint.

The user interface is simple. One can register on the application via a mobile number. To lodge a complaint, a user needs to select the kind of violation from specified offences that include burning of plastic waste, roadside dust, pollution being caused by construction and demolition waste and others. Following this, a user needs to select the concerned department. One can also opt for ‘don’t know the department’. Google maps will take care of the exact location. Along with this, a user can add any additional comment to explain the complaint in detail and accompany it with photos, video or audio message. 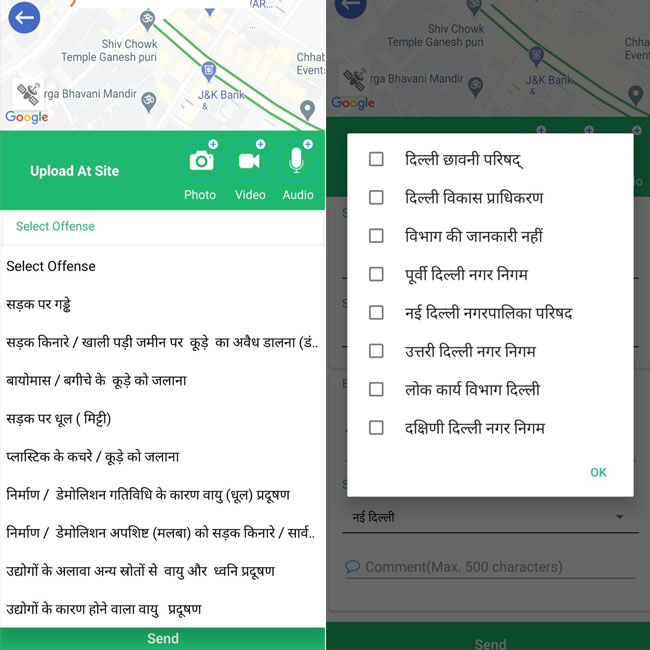 While filing a complaint on Green Delhi app, the user can choose the kind of offence and concerned department

On the homepage, a user can see how many complaints he/she has made and their status in terms of resolved or pending.

A green war room set-up at the secretariat that is operated round the clock will monitor the status of complaints. Along with this, 70 green marshals will help in solving the complaints.

Also Read: Air Pollution Rises In Delhi-NCR, Gurugram Citizens Call For Action Against Waste Burning And Tackle It Like COVID-19

CM Kejriwal again called for citizen participation and said that at the initial stage, users might face some problem but they should be flagged so that the government can make the app better. He added,

Our aim is to bring all the departments – municipal corporation, Delhi Development Authority and the Delhi government – and citizens together and wage a war against air pollution.

At the launch event, Delhi CM also briefed about the other steps being taken to tackle the annual problem of air pollution. He said,

In the last five years, we have taken several steps following which the pollution reduced by 25 per cent. This year also we have taken steps like all pollution causing thermal power plants are closed in Delhi. 95 per cent of the industries in Delhi are now using non-polluting fuel.

Every year, Delhi’s air pollution makes news and often stubble burning in neighbouring Punjab and Haryana is blamed. This year, the Delhi government has introduced a solution for managing stubble waste. Talking about the same, CM Kejriwal said,

Delhi has set an example of decomposing stubble waste. With the help of a bio-decomposer, the problem of stubble burning is being resolved. By spraying a chemical (bio-decomposer), stubble waste is turned into compost. We have sprayed the bio-decomposer in all villages of Delhi and so far, the results have been good. But we will wait for a few more days to share the results. If it gives success then probably by next year, we will have a solution for stubble burning.

Delhi CM also mentioned the launch of Electric Vehicle (EV) policy and called it a ‘very progressive and transparent’ policy.

Children Can Be COVID-19 Spreaders, Rather Than Super-Spreaders: Indian Council Of Medical Research

Exclusive: Serum Institute’s Adar Poonawalla On The Status of Coronavirus Vaccine ‘Covishield’, Its Pricing And More