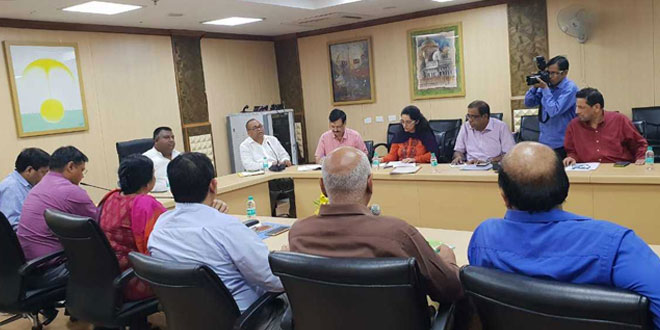 New Delhi: Delhi Minister for Environment and Forests Imran Hussain on Wednesday directed various departments to take strict measures against dust and other pollution emissions in the national capital ahead of winters and festive season. The city witnessed severe air pollution in the past two years, particularly in the winters. In a meeting, Minister Imran Hussain directed all departments to be ready with anti-pollution measures. Mr. Hussain directed them to take measures for prevention and control of road dust/re-suspension of dust and other emissions, says an official statement. The Minister directed the officials to ensure that all construction sites adhere to Waste Rules 2016.

No construction material should be kept out in the open. Regular sprinkling of water at all construction sites must be done. All high-rise buildings should have water sprinkling arrangement for dust suppression. Strict action against violators should immediately be initiated by authorities, he said.

Mr. Hussain also directed transport officials and traffic police to deploy more staff to act against overloaded vehicles and vehicles carrying uncovered construction material, the statement said. The Minister stressed the need to stop the entry of non-destined vehicles in Delhi as Eastern and Western Peripheral Expressways have become operational, it added.
“Municipal corporations were also directed to explore feasibility of water sprinkling in inner lanes of the colony before sweeping as a lot of dust is created from manual sweeping of roads. Public and Works Department (PWD) has been directed to increase the deployment of more Mechanical sweeping machines on more than 60-ft roads and with the arrangement of Water sprinkling on roads,” the statement said.

Environment Min @ImranHussaain chaired a meeting to review the steps being taken for prevention, control and mitigation of air pollution in Delhi and NCR. The meeting was attended by the Secretary Env, Member Secretary (DPCC), Director (Environment), PCCF and APCCF. pic.twitter.com/dvf8e9Oqmw

Mr. Hussain reviewed the action being taken by various departments and agencies on the Graded Response Action Plan (GRAP) as notified upon the directions of Supreme Court to combat air pollution in Delhi and National Capital Region (NCR). The Secretary (Environment) apprised the Minister about the progress made on Green Budget Scheme of Delhi government, Conversion of Industrial fuel to PNG (Piped Natural Gas), conversion of coal-based tandoors to Gas based, conversion of boilers in hotels and restaurants to clean fuel, greening of city by mass plantation.

He also mentioned that Delhi Pollution Control Committee (DPCC) had deployed 83 Home Guard volunteers as environmental marshals in wards of three municipal corporation. These Air Marshals have observed 9,845 cases of violations in Delhi, it said. The meeting to review the steps being taken for prevention, control and mitigation of air pollution in Delhi and NCR, was attended by the Secretary (Environment and Forests), Member Secretary (DPCC) and Director (Environment).

50 Per Cent Indians May Be Hoarding E-Waste For Up To Five Years, Reveals A Survey