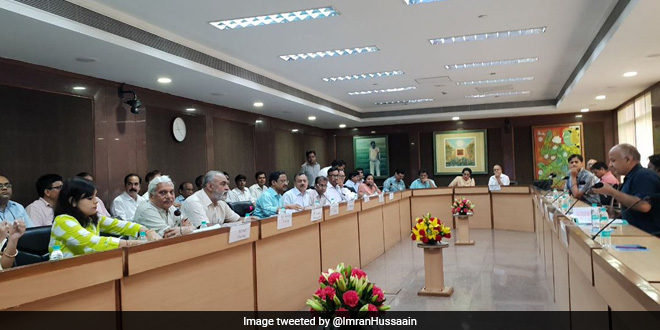 New Delhi: The Delhi government held the first review meeting of its Green Budget for 2018-19, with Deputy Chief Minister Manish Sisodia and Environment Minister Imran Hussain presiding over the meeting. The Delhi government’s Rs 53,000 crore budget for 2018-19 was dubbed as a ‘Green Budget’ as it promised to start major initiatives to combat rising pollution levels in Delhi. 26 separate projects were announced by the state government to better Delhi’s environment scenario. At the review meeting, Mr Sisodia said 21 projects which were started as a part of the Green Budget were on track.

Mr Sisodia said that increasing Delhi’s green cover was one of the top environmental priorities of the government, and work on planting 30 lakh trees was going on in full swing. Mr Sisodia said the government would commit to its deadline of planting the trees by September 30, 2018. He also said that several associations like the Delhi Development Authority (DDA), the Municipal Corporation of Delhi (MCD), resident welfare associations and market associations were cooperating with the Delhi government.

Green budget, which had a 26 point agenda, had its first review on Wednesday in a consolidated manner. 21 projects are on track while five projects – two (of the) Forest Department, two (of) PWD and two (of) transport – are off the track, said Mr Sisodia.

When it was introduced in March 2018, the Delhi government’s Green Budget was hailed as the first of its kind in any Indian Legislative Assembly. 26 separate programmes proposed by the departments of Environment, Transport, Power and Public Works Department were sanctioned as part of the Green Budget. Among some of the key provisions of the Green Budget were plantation of 30 lakh trees by mid-2019, developing infrastructure for real-time air quality monitoring, gradual shifting to clean fuel from petrol/diesel and rolling out 1,000 electric buses in Delhi.

“The Green Budget is indeed the first of its kind in India, as major provisions of the budget were dedicated to fight Delhi’s principal nemesis, pollution. Environmental programmes are not known to have much allocation in state budgets in India, but Delhi broke that rule. But it will be the implementation of the 26 programmes that will be the key, especially plans concerning air pollution as external factors like stubble burning and construction dust are also major causes and how the government plans to curb them,” said  Anumita Roy Chowdhury, Executive Director, Centre for Science and Environment.

Mahesh Chandra Mehta, Environmental lawyer and founder of MC Mehta Environmental Foundation said that the Delhi government must thoroughly plan projects like tree plantation and introducing a fleet of electric buses as activities associated with such projects must also be taken into consideration to make such projects result oriented and sustainable.

Planting of saplings is a good plan, but who will look after these saplings? Has the Delhi government devised a plan of maintaining these saplings? Because without such a plan the trees will not survive even for a year. The same goes for electric buses. The government must devise a proper plan for their parking and maintenance, without which plying them will be risky, said Mr Mehta.

Delhi’s Deputy Secretary for Environment Kaushal Kishore however said that the government had considered all odds before beginning work on the projects. Trees planted will be regularly monitored and no construction activity would be permitted near them, said Mr Kishore. He added that tree cover of Delhi has increased from 299.77 sq.km. in 2015 to 305.41sq.km. in 2017.

During the review meeting, the Delhi government also asked the Delhi Pollution Control Committee (DPCC) to implement a ban on plastic, nylon or glass-coated threads used for kite flying. Departments of revenue, wildlife, Delhi Police and the MCD were directed to enforce the ban strictly by Environment Minister Imran Hussain.  Manufacture, sale, storage and supply of such threads were completely banned by the Delhi government, as decided during the meeting.

The Delhi government’s fight against pollution is ongoing on several fronts, namely waste management, air pollution and increasing the capital’s green cover. While the Green Budget is an ambitious multi-fold plan to address Delhi’s pollution problems, experts worry that the government may have too much to do in limited time. The government’s immediate litmus test will be next year, when many of the ongoing environmental projects like rolling out of electric buses and greening of PWD roads will be implemented, allowing Delhiites to conclude whether the Green Budget is moving towards success or not.

1000 Electric Buses Still A Year Away, Delhi Government Replies To Supreme Court On Its Implementation