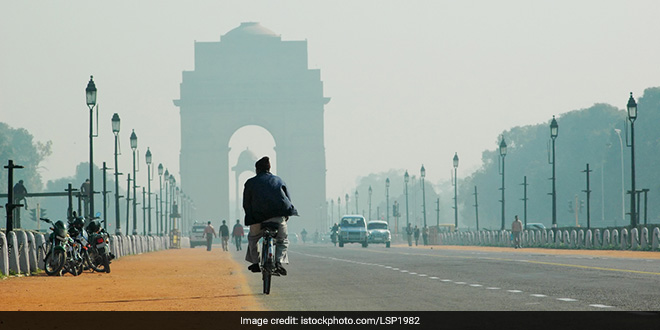 New Delhi: Over the last few days, Delhi has reported a record daily spike in coronavirus cases. The national capital reported its biggest single-day jump of 8,593 cases on Thursday, November 12, the tally of confirmed cases now stands at over 4.5 lakhs. Delhi is currently home to over 42,000 active cases of coronavirus, and the top medical body, Indian Council For Medical Research, has said that this is the third wave for the city.

According to ICMR Director General, Balram Bhargava said factors such as pollution, cold weather, festivals, wedding season, apart from travels in Delhi-NCR are leading to gatherings, which is resulting in a spike in COVID-19 cases.

A third spike has come now in Delhi after the first two spikes in June and September, which is showing more cases than before, he said in a recent press briefing.

When asked whether Delhi has reached the stage of community transmission and if cases would increase during the festivals, Health Secretary Rajesh Bhushan said at the time of festivals or marriages when people gather and do not follow COVID-19 appropriate behaviour, there are chances of the spread of the infection.

Discussion on community transmission is quite often informed by less than adequate information and facts. It should rather be based on science and facts, Mr Bhushan said.

Also Read: Expert Advice: How To Celebrate Diwali Amid The COVID-19 Pandemic?

The number of COVID-19 deaths in Delhi is shooting up as well. Delhi recorded 83 COVID related deaths on Wednesday, November 11, the second-highest number of deaths recorded in the capital. The highest number of deaths, 93, was recorded on June 16 in Delhi. Furthermore, Delhi has been reporting a daily average of 70 deaths for the last seven days. While, in the previous week, this number stood at 42.

Earlier we used to have more moderate cases but now we have more severe cases. Hospital beds in Delhi are getting filled up and that is causing delayed arrival of patients. This is increasing mortality. And there are studies that show air pollution increases mortality as COVIDis a respiratory disease.

In October, a high-level expert committee led by NITI Aayog member VK Paul and appointed by the Central government had recently pointed out that hospitals in Delhi should prepare for 15,000 daily cases owing to a spike in respiratory illnesses with winter setting in along with COVID-19 cases. Mr Bhushan, however, at the briefing said the figure of 15,000 is an estimate and not a definitive figure.

All India Institute of Medical Sciences, Director, Dr Randeep Guleria too, tells NDTV, that this spike of COVID cases could be attributed to the rising levels of air pollution in the capital.

There is evidence to support my claim, through a number of studies. There was one study conducted during the SARS outbreak in China that looked at the correlation between levels of air pollution and SARS patients. The study found that those areas with higher levels of pollution had a higher number of sick patients with SARS infection. More recently, there was a study from the northern part of Italy, which also looked at districts with high pollution levels, and saw that there was an increasing number of cases there with high mortality. So, this data can be considered to believe that high levels of pollution cause more serious COVID-19 infection, because air pollution itself causes inflammation of the lungs, decreases the immunity and all these things are what coronavirus needs to have to propagate itself. And therefore, this combination can be very deadly.

Also Read: PM2.5 Levels On Diwali Will Be Lowest In Four Years If No Crackers Burnt: SAFAR

Furthermore, Dr Guleria explains that we are already seeing more cases now than ever before. He said that unless we are very aggressive both in terms of our individual responsibility and taking action in terms of containment, tracking, testing, and in terms of making sure that we are able to prevent super spreading events, otherwise, we will have a huge number of cases.

This will cause a strain on the hospital services itself. So we need to start very aggressive actions at multiple areas so that we contain these cases, he added.

The strain on hospital services might be something being witnessed by the national capital right now. As per an analysis by Delhi government’s coronavirus tracking app, the total number of ICU beds with ventilators in the city is 1,283 of which 1,119 (87 per cent) is occupied. Only 164 beds (13 per cent) are vacant.

The list of major hospitals which have no vacancy for  ICU With Ventilators includes the GTB Hospital, Deendayal Upadhyay Hospital, Max Shalimar, Maharaja Agrasen Hospital, Indraprastha Apollo, Fortis Vasant Kunj, and Fortis Escorts hospital, as per a spokesperson from Delhi Health Department.

To help with the situation, Delhi Health Minister Satyendar Jain has asked 14 private hospitals to reserve 50 per cent of their beds for coronavirus patients, leading to the addition of 685 more beds.

Some government hospitals have said they are left with either a few beds or none, as COVID-19 patients continue to stream in. Doctors have raised concerns that they need to clear treated patients fast in order to accommodate incoming ones and avoid crowding or a long backlog. While more than 80 per cent ICU beds are occupied, among ICU beds with ventilators, 83 per cent are occupied. Among ICU beds without ventilators, 82 per cent are occupied. We are again, like August, working on increasing our bed capacity and number of ICU. We are figuring out what can be done to arrange more ICU beds as well as what can be done about the air pollution problem, in order to decrease the number of severe patients, a spokesperson from Delhi Health Department told NDTV.

When it comes to the status of testing in Delhi, a spokesperson from the Health Ministry told NDTV that the Delhi government has been directed to not only conduct more tests but also conduct targeted testing.

This means those places where there is a potential for the spread of the infection like markets, workplaces, factories or places where religious gatherings are held, testing must be done, he explained.

Now three-time more tests are being done compared to the last time there was a peak. More than 64,000 tests were conducted yesterday, which is a record in itself.

The spokesperson from Delhi Health Department also informed that the Delhi government has started targeted testing.

The Delhi government is relying heavily on tests to control the numbers. Across the city, RT-PCR tests are being conducted in markets, shops and restaurants on both shopkeepers and customers, keeping the festive rush in mind. One of the most crowded areas being tested is Connaught Place, where shopkeepers have been getting tested for three days now. On Monday, there were about 100 tests out of which only 10 tested positive. Then on Tuesday, 15 were confirmed positive out of the nearly 200 people who were tested. We are requesting all shopkeepers to get tested. If the visitors also want to get tested, then they can avail the test for free. Sanitisation is being carried out across the market by the market association and masks and sanitisers are being distributed to all shopkeepers, he explained.

Overall, India is the nation conducting second-highest tests in the world, having tested 11.96 crore samples for COVID-19.  Of this, 49 per cent were rapid antigen tests while 46 per cent were RT-PCR, the Union Health Ministry spokesperson informed NDTV. The remaining five per cent tests were carried out using CBNAAT and TrueNat till this morning, he added.

Antigen tests are designed to detect a specific protein in the virus that elicits the body’s immune response. In the case of Covid-19, it is the ‘spike protein’ present on the surface of the coronavirus that facilitates its entry into the human cell. The rapid antigen test gives results in 30 minutes.

TrueNat is a chip-based test that works by detecting the SARS-CoV-2 E-gene, which helps build the envelope that holds the components of the coronavirus together, and the gene for the RNA-dependent RNA polymerase, an enzyme that enables the virus to replicate.

TrueNAT is an indigenously developed, portable version of CB-NAAT or Cartridge Based Nucleic Acid Amplification Test, also known as the Genexpert test. Both these tests were initially developed for testing tuberculosis

The Delhi High Court on Thursday pulled up the Delhi government and asked what steps it was taking to control the spike. The High Court noted that Delhi, a city-state, is beating Kerala and Maharashtra in the number of COVID-19 infections.

The court said that Delhi’s latest sero survey report indicates that “No household has been left untouched” by the infection as one in every four persons in Delhi has been infected by COVID-19.

The High Court for referring to the fourth round of sero survey carried out in the national capital, which was placed before a bench of Justices Hima Kohli and Subramonium Prasad, the central district of Delhi has seen an increase of more than double in the rate of infection as compared to the data of the survey carried out in September.

Under the survey conducted between October 15 to October 21, 15,015 people were tested and the prevalence of antibodies was found to be slightly higher in females at 26.1 per cent as compared to males – 25.06 per cent – and also comparatively higher – at 29.83 per cent — in participants of more than 50 years of age, the report said.

While other states are imposing restrictions, the Delhi government is relaxing all norms, allowing 200 people to attend public functions instead of reducing the number and permitting public transportation to be fully occupied. The court said that these could turn into “super spreaders” of the infection. The Delhi Health Department official refused to comment on this aspect at the moment.

Expert Advice: How To Celebrate Diwali Amid The COVID-19 Pandemic?