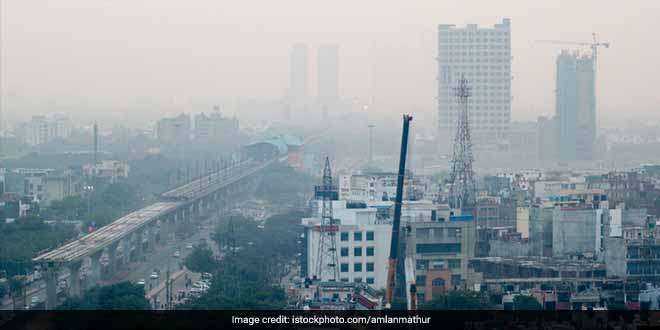 New Delhi: Delhi and the National Capital Region woke up to a blanket of smog today, after a quiet and promising Dilwai evening gave way to noisy and relentless bursting of firecrackers till late night yesterday, despite a Supreme Court ban on their sale in the NCR.

The online indicators of the pollution monitoring stations in the city glowed red, indicating a ‘very poor’ air quality as the volume of ultra fine particulates PM2.5 and PM10, which enter the respiratory system and manage to reach the bloodstream, sharply rose from around 7 pm yesterday. Real time pollution data appeared alarming. The Delhi Pollution Control Committee’s (DPCC) RK Puram monitoring station recorded PM2.5 and PM10 at 878 and 1,179 micrograms per cubic metre at around 11 pm.

The pollutants had violated the corresponding 24-hour safe limits of 60 and 100 respectively by up to 10 times. While it is difficult to quantify the immediate effect of the ban on firecrackers, residents across the national capital felt the beginning was promising with neighbourhoods reporting much lesser noise and smoke till about 6 pm, compared to the previous years.

But as the festivities picked up, the faint echos of crackers started growing louder. According to the SAFAR (System of Air Quality and Weather Forecasting And Research), the 24-hour rolling average of PM2.5 and PM10 were 154 and 256 micrograms per cubic metre respectively at around 11 pm yesterday.

It has forecast that the pollution levels will peak between 11 pm and 3 am. The situation was similar, if not worse, in the neighbouring regions of Delhi such as Gurugram, Noida and Ghaziabad, where crackers were burst as usual, raising question marks on the efficacy of the administration in enforcing the apex court’s ban.

However, the SAFAR has also predicted a relatively cleaner post-Diwali air due to favourable meteorological conditions, which are helping prevent the smoke-filled air from the agricultural belt of Haryana and Punjab from entering the national capital.

A ‘very poor’ air quality index (AQI) essentially means that people may suffer from respiratory illnesses on a prolonged exposure to such air. If the air quality dips further, the AQI will turn ‘severe’, which may trouble even those with sound health conditions and seriously affect those with ailments.

Measures under the GRAP’s ‘very poor’ and ‘severe’ categories, which include a ban on diesel generator sets, came into effect on October 17 and they will remain in force till March 15.

Dealing With The Diwali Mess: 5 Cleanup Tips To Keep In Mind