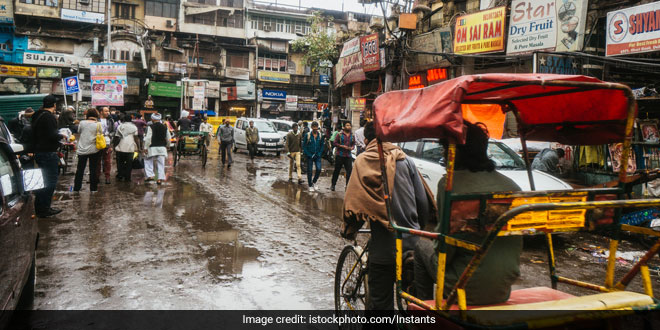 New Delhi: The morning of Children’s Day that is November 14 witnessed a slight drop in the levels of air pollution due to light shower during early morning hours. The overall air quality index (AQI) was recorded at 348 which falls under ‘very poor’ category. According to the data by Central Pollution Control Board (CPCB), twenty eight areas in Delhi recorded ‘very poor’ air quality while three areas recorded ‘poor’ AQI. The drop in levels of pollution is being attributed to the drizzle, but according to experts, the same shower might cause higher pollution retention resulting in the rise of levels of pollution.

According to System of Air Quality and Weather Forecasting And Research (SAFAR), on Wednesday at 6 pm, while particulate matter (PM10) dropped down to 280, falling under ‘poor’ category, PM 2.5 remained in ‘very poor’ category with AQI at 175. As per the forecast by SAFAR, the AQI is expected to deteriorate with PM 10 being at 333 and PM2.5 at 205.

The air quality is likely to improve in the next two days, but remain in the very poor category in Delhi-NCR till Thursday. The impact of biomass burning in North West India is marginal over Delhi, Indian Institute of Tropical Meteorology told PTI.

Urban Emissions.info, a research think tank working on urban air pollution, forecasted that after lifting the ban, the largest contributor to PM2.5 on Wednesday would be due to power plants and diesel generator sets at 19.6 per cent followed by emissions by industries and household pollution at 17.3 per cent and 15.9 per cent repectively.

Also Read: Delhi Turns Into A Gas Chamber Ahead Of Diwali

Since Diwali, AQI in Delhi and neighbouring areas is oscillating between ‘very poor’ and ‘severe’ category. To keep a check on alarming levels of pollution post Diwali, a ban on the entry of heavy vehicles and construction and demolition activities was imposed from November 8-12 by the Supreme Court appointed Environment Pollution Control Authority (EPCA).

Despite the thick haze engulfing the national capital, on November 13, ban was uplifted. The EPCA also permitted construction activities only during the daytime (6AM to 6PM) due to poor dispersion of pollutants at night.

Amidst this, doctors are advising to avoid unnecessary outdoor exposure, use face masks, and keep medicines handy and if in case they suffer any respiratory issue, they should immediately consult a medical practitioner.