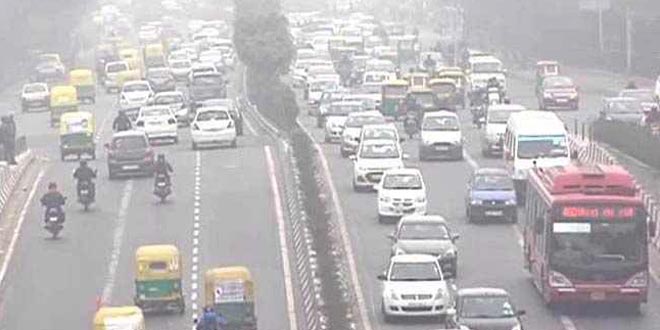 New Delhi: The Delhi government has declared a medical emergency with the Central Pollution Control Board (CPCB) sending out alarming messages on its website, calling for states to tackle pollution on a “priority basis”. The CPCB is holding frantic meetings to keep the public updated on the alarming PM (particulate matter) levels. Delhi Chief Minister Arvind Kejriwal has termed the situation as an “emergency” as the Meteorological Department has forecast that a change of weather is most unlikely.

The World Health Organisation in 2014 classified New Delhi as the world’s most polluted capital, with air quality levels worse than Beijing; and it appears that now in 2017 the situation has worsened multiple-fold. Delhi’s air quality is usually known to worsen ahead of the onset of winter as the cool air traps pollutants near the ground, preventing them from dispersing into the atmosphere, a phenomenon known as inversion.

While Delhi has always had its fair share of pollutants attributed to the exploding vehicular population. (What can you expect if 1,400 new vehicles are added to the roads every single day?) According to government statistics, the total number of vehicles in Delhi exceeded 10 million for the first time in 2016. There is official apathy to keep a check on vehicular emissions; and the problem is exacerbating because of the stubble burning by the farmers.

A report in the Lancet medical journal stated that pollution had claimed as many as 2.5 million lives in India in 2015, the highest in the world. And it’s only a guess the role of the nation’s capital has on this “achievement”. How much sense does it really make in always working on a war-footing, in utter desperation, year-after-year, when there is a need to work on this all through the year so that the situation that only seems to be worsening year-after-year is judiciously controlled?

Construction activities have been suspended temporarily; the city chiefs have been calling for a total ban on trucks entering the city; schoolchildren have been asked to refrain from going to schools and have been asked to stay indoors because they are the most vulnerable to pollution that is usually at its peak in the mornings.

Why be concerned only about the children and the aged? The microscopic particles, which are smaller than 2.5 micrometers in diameter, are considered harmful because they are small enough to lodge deep into the lungs and pass into other organs, causing serious health risks to even a normal human being.

Retailers selling air purifiers are making merry as sales have surged significantly. People are moving about with masks and scarves over their nose, hoping that it could bring respite. The hashtag #smog was the top trending on Twitter, Facebook, even as the people of Delhi continue to demand stronger measures to curb pollution.

But what does one need to do? Primarily start with planting more trees. Development and upgrading of infrastructure should not mean felling of trees and starving people of oxygen. The government should ensure that polluting industrial establishments move out of the city limits and also stringently limit approvals to these units in areas of habitation. The government machinery should also start looking at greener alternatives in place of pollution-emitting fuel in vehicles.

While the to-do list could be long, it is imperative to start somewhere because pollution has now overwhelmed the action taken and what is unfolding today is a scary story.

Rain And Snow In Jammu And Kashmir Will Reduce The Smog And Pollution In Delhi: Met Office