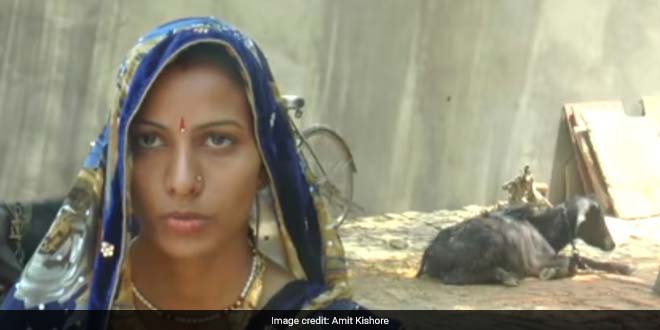 Tragedies often strike when they are least expected but more often tragedies steel our resolves to take the right step. For Kalpana Singh of Etah, Uttar Pradesh, tragedy struck in the form of loss of several family members right before what was supposed to be a happy and memorable occasion. But despite the tragic incident, Kalpana’s advocacy for the requirement of toilets for women remained strong as before, not deterring her from her stance. Eventually, she was rewarded in the form of being named as Etah district’s brand ambassador for the district’s open defecation free (ODF) movement.
Etah, under Aligarh division is a district in Western Uttar Pradesh. Like many of the state’s backward districts, Etah has woeful sanitation coverage of merely 17.97 per cent. Spreading over more than 4,000 square kilometres, the district population is habituated to defecating in the open as individual household toilets in the village are still a dream. The district administration hopes to change this old and prevalent habit of defecating in the open by appointing Kalpana as their brand ambassador and popularising her story of courage and defiance.

Kalpana’s marriage with Indo-Tibetan Police Force (ITPB) jawaan Ram Milan Singh was fixed for May 8, and festivities were galore at her household. Unaware of the upcoming tragedy, Kalpana’s relatives began to arrive at her household to assist her family with the engagement rituals, scheduled to take place on May 5. But it was on the night of May 4 when tragedy struck in the form of a road accident, which resulted in the death of many of Kalpana’s relatives, including her brother and uncles. The accident caused the death of 14 people and the spirit of festivities was overtaken by the clouds of gloom.

I had called Kalpana to check how she was doing post the accident. The accident resulted in a number of deaths and even the Chief Minister was concerned about the casualties. On calling her, I found out that the absence of a toilet at her in-laws house and immediately directed officials to build a toilet at her in-laws household, said Amit Kishore, District Magistrate, Etah.

What prompted Kalpana to act on the absence of a toilet was her dignity was hurt when she realised that she had to relieve herself in the open at her in-laws. The accident had already taken away a lot from Kalpana and she didn’t want to compromise on her dignity and self-esteem with a bottle of water in her hand, every time she wanted to relieve herself.

I have always used a toilet at my home and the absence of one was very surprising for me. I had already suffered an irreparable loss and did not want to lose my self-respect at my in-laws. That’s why when the District Magistrate called, I told him about the problem of an absent toilet at my new home, said Kalpana. 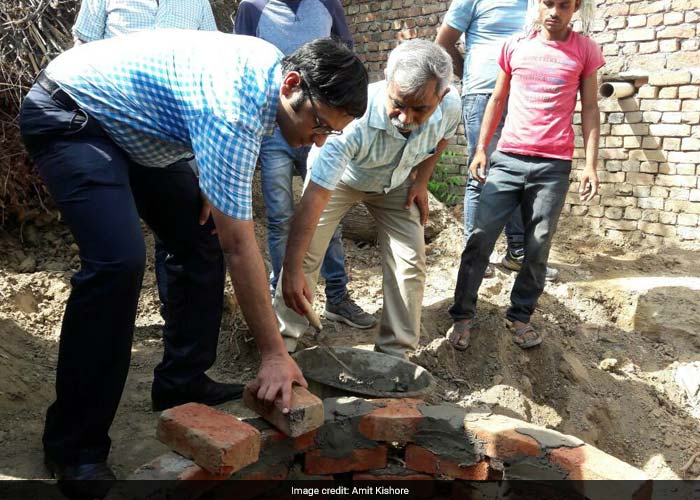 DM Amit Kishore helping in the construction of a toilet

The District Magistrate asked the panchayat to help build a leach pit toilet at Kalpana’s in-laws. Masons trained under the Panchayati Raj Department helped finish the construction of the toilet by May 11, and was announced as the administration’s gift to the newlywed couple.

Kalpana’s story of determination does not end here. The District magistrate spoke to her extensively and found her views on the importance of eradicating open defecation highly impressive. Shortly afterwards, she was announced as the Swachh ambassador for Etah district. The administration plans to invite her to various workshops organised under the Swachh Bharat awareness programmes and let her narrate her story of resolve. The administration hopes that her tale will encourage others to build toilets and improve Etah’s sanitation scenario. The administration also plans to make the entire district of Etah open defecation free by December 2017.

For someone to have suffered such a huge loss and yet not give up the demand of a toilet was very inspirational. We would like Kalpana to accompany us to our awareness programmes and speak about her ordeal so that people understand how important household toilets are, said Mr. Kishore.

Can These Eco-Friendly Bags, Made Out Of Natural Starches And Vegetable Wastes Serve As An Alternative To Plastics In Future?