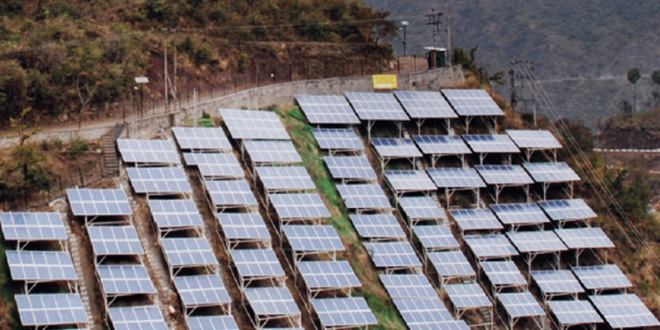 New Delhi: Thermal power plants that use coal, oil and other fossil fuels are one of the largest contributors to air pollution globally. According to an estimate made by the Centre for Science and Environment (CSE), a Delhi based think tank, a typical 500 mw (Mega Watt) thermal power plant using coal emits around 105 tonne per day (tpd) of Sulphur dioxide, 24 tpd of Nitrogen Dioxide and 2.5 tpd of particulate matter and ash around 3,000-3,500 tpd. The toxic gases and ash from coal-fired power plants are linked with various health-related complications like asthma, heart and lung ailments, as per experts. Thermal power also causes environmental problems like acid rain, global warming. Thermal power has been a major source of electricity in India and currently contributes about 63.2 per cent to the total power generated in the country, as per the Ministry of Power. Even though the government has been pushing for increasing the renewable energy generation capacity, this largest and dirtiest source of energy is here to stay and dominate India’s energy sector for another decade, as per the Power and New and Renewable Energy Minister, R.K. Singh.

In his written reply to Rajya Sabha in July this year, Union Minister Singh said,

The capacity of coal-based generation would increase from about 195 GW (GigaWatt) as on June 30, 2019, to 238 GW as on March 31, 2027. Accordingly, the total coal requirement would increase from 698 million tonnes (MT) for 2019-20 to 877 MT during 2026-27. Thus, besides meeting the present deficit in coal supply to the power sector, Coal India Limited (CIL) may enhance its production of coal to meet the growing requirement of the power sector.

The National Electricity Plan 2018 estimates the share of electricity generated from coal-based power plants to go down to 58 per cent by 2027 but thermal power will still account for more than half of the power generated by the country. As per an official from the Ministry of Power, the reduction in the share of coal-based generation in the total generation over the years would be mainly due to the addition of renewable energy like solar and wind energy.

The central government has set a target of installing 175 GW of renewable energy capacity by March, 2022 but the capacity achieved till now is only 78 GW till now. The government has taken a slew of measures to expand power generation capacity through renewable energy sources. These include a waiver of charges on the inter-state transmission system (ISTS) in which power generated in one state can be purchased and used by another state, providing subsidies for encouraging rooftop solar panels, among others. Even the Foreign direct investment (FDI) of up to 100 per cent has been allowed in this sector. According to A.K. Saxena, Director, Solar Energy Department, The Energy and Resources Institute (TERI), there are two factors that need to be worked on to make renewable energy more practical in the country- Cost effectiveness and efficient power storage. Mr. Saxena said,

If we take into account the lowest bid of Rs. 2.7 per unit of electricity from the renewable energy industry, this is almost at par with the charge of coal-based electricity of many coal plants. Renewable energy needs to become competitive with the cost of coal-based power generation, only then it makes economic sense for a developing country like India to become fully dependent on clean energy.

According to Union Minister Singh, the electricity demand is expected to be increased by about 10 per cent by 2030. Even if the coal dependence gets reduced to 58 per cent by 2030, rest of the capacities like nuclear, gas-based capacity are very small and so the major contribution will come from hydropower, solar energy, and wind energy, as per Mr. Saxena. He said,

Now it all depends on the decline in prices of the wind and solar energy plus the battery storage to enhance the contribution of these sources to the energy mix. Till we achieve the cost of renewables to be less than that of thermal, coal will continue to play the role it has been playing in the country.

Also Read: Solar Energy To Power All Delhi Metro’s Needs By 2021 From The Current 30 Percent

Another challenge faced by the renewable energy sector is that of the integration of renewables into the existing grid because as the quantum of renewable energy being injected into the grid will keep increasing, there will be issues of grid stability and damages. Mr. Singh said,

As we are on the path of a future with renewable energy dominating the country’s power sector, studies need to be done well in advance on-grid capacity so that we are well-prepared from grid security concerns.

He further said that renewable energy is intermittent in nature which means that it is not of much utility unless there is some battery storage system and grid connectivity with it. He said,

The biggest challenge is that as and when the sun is shining or the wind is blowing, only then you get the electricity but you don’t get when you require it during the other hours. In the case of solar energy, 100 per cent dependence is difficult because during the evening the power demand is very high on account of the residential load. To meet these demands, there is a need to have a more dependable power generation capacity. 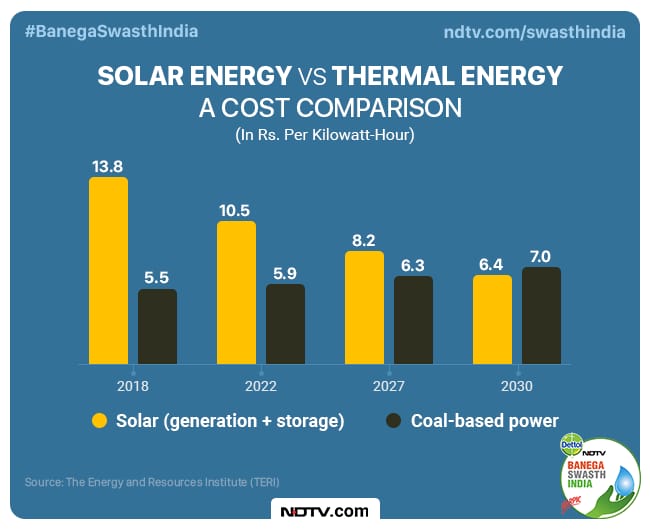 As per Alekhya Datta, a researcher at TERI, as the dependence on renewable would increase, power deficit will occur during peak evening hours for which the demand of power needs to become flexible to shift the load away from night-time. He said,

The way out is to have a balanced approach for better demand response like better battery energy storage, increase in energy-efficient electrical appliances like Air Conditioners, geysers, and lights along with energy-efficient agricultural pumping and industrial load reducing machines.

Why Coal- Based Power Generation Needs To Be Reduced?

According to Sumit Sharma, Air Pollution Expert at TERI there are about 120 power plants across India and the areas around thermal power plants are some of the worst affected areas by air pollution. The particulate matter emitted by thermal plants can be controlled by using electrostatic precipitator, a device that removes suspended dust particles by up to 99.9 per cent. However, as per him, in most plants, the devices do not work properly and if those do work efficiently, toxic gases produced are major cause for concern because there is no control device for gases. He said,

Nox (Nitrogen oxides) and So2 (Sulphur Dioxide) are getting released in the atmosphere uncontrolled. These gasses are not only toxic themselves but they also convert into toxic particles called secondary particles which also add mass to particulate matter. The NOx released from power plants also contribute to ozone, which is becoming a major source of air pollution now.

He further said that since these power plants are usually on the outskirts of major cities in rural areas, together with the dependence of rural population on biomass burning fuel for cooking on a daily basis, the problem of air pollution increases manifold rural population is dependent on biomass burning for cooking on a daily basis, which is one of the biggest sources of pollution in India. He said,

At the national level, the contribution of thermal power plants to pollution, especially by particulate matter produced by the gases emitted is about 7 per cent. While the number may look small, it is a cause of worry because in the regions around power plants the quantum of pollutants is much higher.