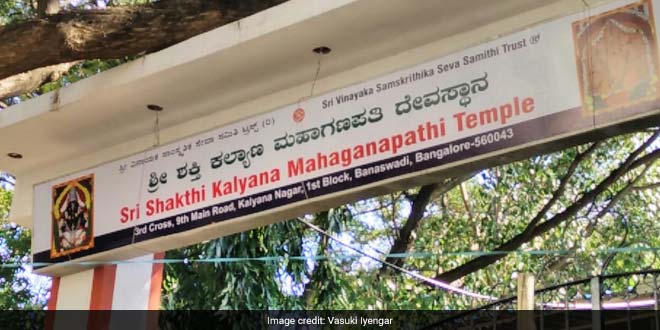 Places of devotion are meant evoke a sense of purity and sanctity. But can the same be said about places of cleanliness and hygiene standards of these places of worship? Daily influx of people often results in unclean premises, rampant disposal of waste and environmental damage. Numerous religious places across India are tackling the menace of waste problem on a daily basis as kilos of food and plastic waste is carelessly strewn around. Tackling the daily waste problem becomes a challenge for temples, especially the big ones which see thousands of devotees pouring in every day. But the Shakthi Kalyana Mahaganapathi temple in Bengaluru, Karnataka stands out with its efforts to adopt pratical measures to clean-up the temple premises. It has a functional waste management system, which ensures that the waste generated in the temple can be reused effectively.

The temple, situated in the city’s northeastern area of Kalyan Nagar receives about 500 devotees a day. From plastic cups in which prasad was given to the devotees, to flowers, fruits and incense sticks, the heap of waste which had accumulated near the temple’s entrance contained both biodegradable and non-biodegradable materials, but remained untreated nonetheless. Till November 2016, the heap of garbage was a regular sight for the devotees, and rampant dumping of waste was a regular practice.

We receive nearly 500 devotees every day. The temple had become very dirty because most devotees would dump waste within the temple premises. Everything ranging from food to flowers would be strewn all around the temple, making the temple area unclean. On days when garbage collectors did not arrive, the temple resembled a garbage dump. It is then when we decided to do something about it, said Ashok Betraj, trustee member.

Trustee member Ashok and his sister Anupama Harish realised that a two-step approach to the problem was necessary to tackle the waste problem. Focusing on stemming the flow of disposable items inside the temple premises was the first step the brother-sister duo took. The temple authorities stopped the distribution of prasad in plastic and foam containers and encouraged devotees to bring their own containers. Despite initial objections by devotees, especially the ones who were not regular visitors to the temple, this rule was strictly enforced by the temple authorities. For new or irregular visitors, containers made of dried leaves were provided. 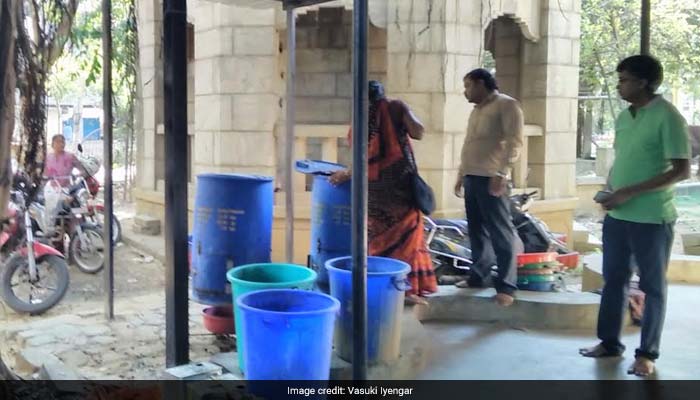 Segregating waste at its source

The temple authorities got in touch with Quantum Leaf, a Bengaluru based composting solutions company. Established in 2014, Quantum Leaf helps setup composting systems which can compost biodegradable waste. The organisation helped setup five leaf composters inside the temple premises. Fruits, flowers, kitchen waste and leaves were all gathered on a daily basis and brought to these composters. The temple staff helps in bringing the waste to composters, where the waste gradually turns into usable compost. The temple also saw the installation of two barrels only for disposal of kitchen waste. Waste from these barrels is carried to the composters where they are composted. 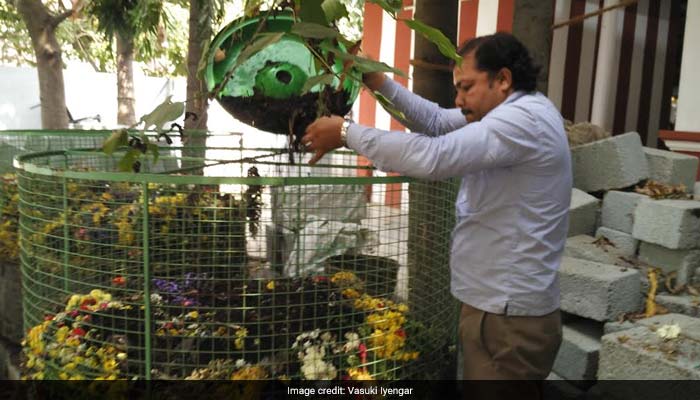 Composting inside the temple premises

The setting up composting systems within the temples has reduced the temple’s dependency on any civic body for collection or disposal of waste. From waste collection to composting, the whole cycle is carried out within the temple and by the temple staff, ensuring that there is no gap in the functioning of the cycle. By implementing an effective disposal and composting system, the temple authorities have ensured that people who come in to worship also understand that cleanliness is akin to godliness. The temple also sets a successful example of bringing in behavioural change in people and utilising waste generated within its premises for a better purpose. Bengaluru, which ranked a disappointing 210 in the recently released Swachh Survekshan rankings, can take inspiration from this small scale but effective waste management model in the temple.

The compost generated from waste is in big demand among the devotees. We also arrange occasional awareness programmes on cleanliness and waste management, citing the model in our temple as an example. When temples becomes environment-friendly, the effect can be felt across the locality. The effect of the change can spread widely, said Mr. Ashok.

Also Read: Swachh Kadam: This Mumbaikar Is Recycling Shoes To Tackle The Problem Of Waste

How Chhattisgarh’s Ambikapur Is Turning Its Trash Into Treasure

Playgrounds For Children From Scrap Tyres, 5 IIT Students Came up With This Idea To Recycle Waste