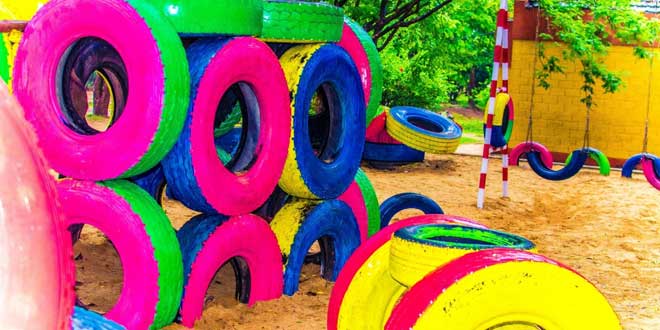 At a young age of 23, when most are looking at lucrative career options, these five IITians were thinking about a way to tackle India’s growing waste crisis. The result was an architecture company named Anthill Creations in Bengaluru. What do they do? Well, use scrap tyres to build playgrounds for the underprivileged children. It has taken the team a lot of hard work, dedication to set up this firm and run it successfully. Till now the company has effectively completed 9 projects in 4 different cities of India and is showing the world how to manage waste in an effective way.

Playground Made Of Scrap Tyres – A Step Towards Green Future 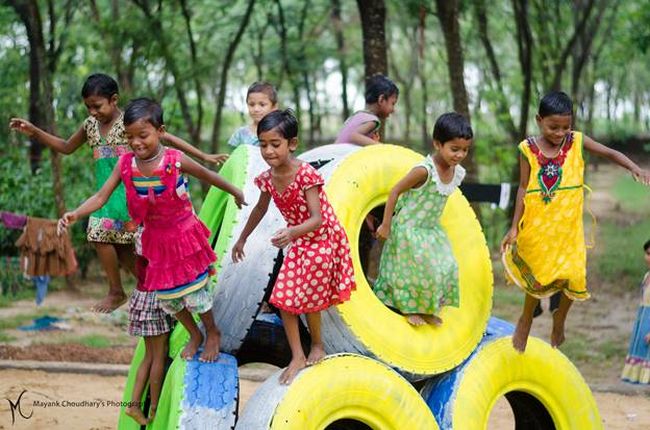 Reports suggest that globally 15 million tonnes of waste tyres are generated annually, out of which India contributes one million tonnes. With major landfills of India that are already on the verge of dying, tyres waste is becoming yet another problem to deal with for the country. Anthill Creations has so far successfully reused 830 scrap tyres to build playground and libraries for the children in Bengaluru. More initiatives like this can help in reducing the burden of tyre waste on the landfills.

An Innovation That Can Change The Way We See Scrap

The idea of building a sustainable playground for kids came to these 5 students of IIT Kharagpur who were studying Architecture, when they started interning for different projects as a part of their course. 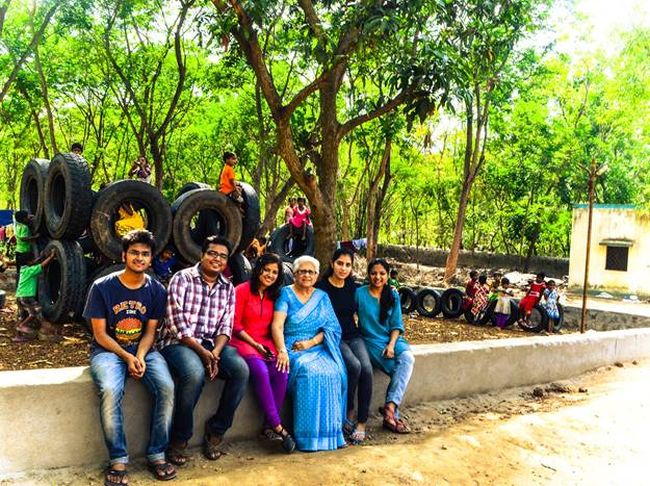 We 5 always connected with each other as we had common thoughts about future that one day we will start something of our own and will work out something that could solve any one issue that is prevailing in our country and is hampering its growth. One of our friends was interning with a Morocco based architectural organisation where recycling was adopted to great extent. That triggered us all to do something on recycling as currently India is not too friendly with this concept and after days of research we came to an idea that we will make playgrounds for the underprivileged children by using scrap tyres, said Pooja Rai, Co-founder and CEO of Anthill Creations in Bengaluru. 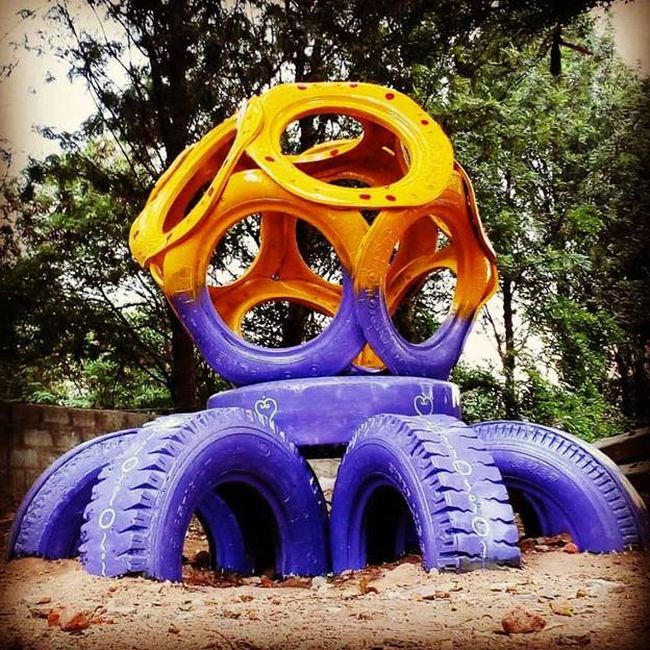 Reusing tyre waste like this, would not just help safeguard the environment but is also cost effective

But, Why Scrap Tyres?

Since tyres are made to last long, the same things that make them durable can also make them difficult to break down thus effecting the environment in long run. Disposing the tyres in landfills can cause severe environmental and health concerns as one tyre alone takes thousands of years to decompose it completely. In many cases, it ends up being burnt, releasing toxins and pollutants into air, water and soil. 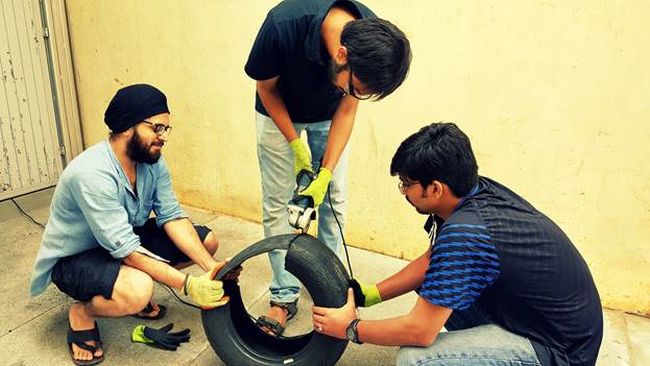 Work in progress – The project believes in the concept of ‘Do It Yourself’ and therefore does not involves any labours or workers in order to build a playground for children. The work is done by the volunteers

Explaining the concept and why the company chose to build playgrounds by using scrap tyres alone, Pooja Rai added, we wanted something that we can easily avail in India when it comes to recycling. And we found that there is abundance of tyre waste available in our country which every year makes its way to our already overfilled landfills.

Another positive point about using scrap tyres is that they are made up of solid materials so as it can last for long-long time. Therefore, recycling these non-biodegradable materials, would not just prove to be good for the environment but also cost effective as a building material. 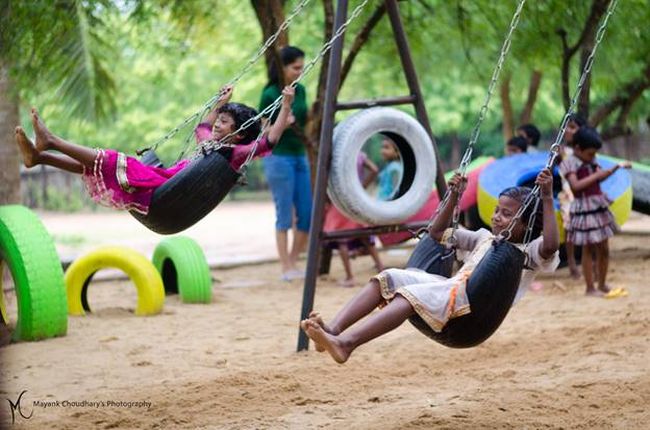 In 2014, the company successfully built its first low-cost eco-friendly playground at the Disha Seema Care centre which was located inside the IIT Kharagpur campus only and since then there is no looking back for these students.

One of the major strengths of the company is that it works on the concept of ‘Do It Yourself,’ there are no workers involved to even build these playgrounds. The company involves different communities and calls out for volunteers who then help establish different projects in different areas, explained Pooja. 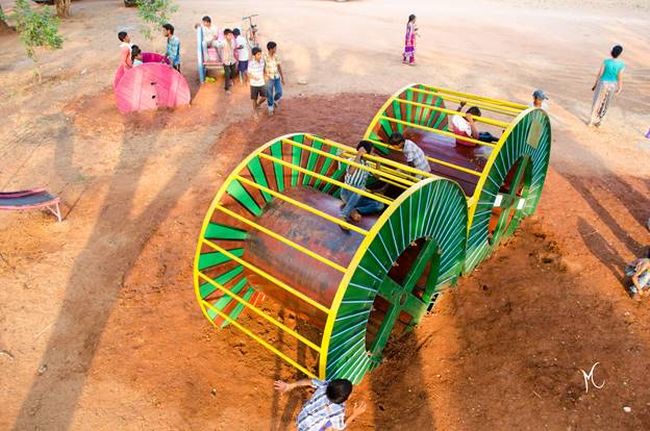 Yes, it is possible – a playground made of scrap items

Talking about the process, the team collects tyre waste from garages, godowns and has tied up different manufactures and companies who on regular basis provide them with tyre waste. Recently one of the companies have also started giving them cable drums that are made of steel for the purpose of using it in the playgrounds they build. 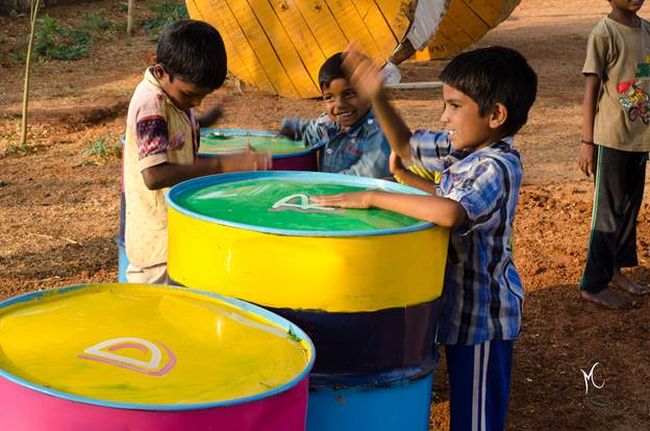 A playground that is worth a million smiles, constructed out of recyclable scrap tires

Once the team has collected the waste they go out to different companies looking for sponsorship for these low-cost playgrounds for the underprivileged children.

These playgrounds made of scrap things is a very unusual idea, not many of us are aware about the same. But, it is new and alluring concept. I recently got 2 playgrounds made by the company and all it costed me is Rs. 20,000, that’s something I wasn’t expecting. It is definitely attracting my children and onlookers. What’s great is that every time anyone sees the playground they ask me about the same, that ways the company is successfully promoting the strong message of recycling and why opt for it, said Pramod Kulkarni who recently got playgrounds made in his NGO named Sathi which helps in rescuing children from railway stations across the country. 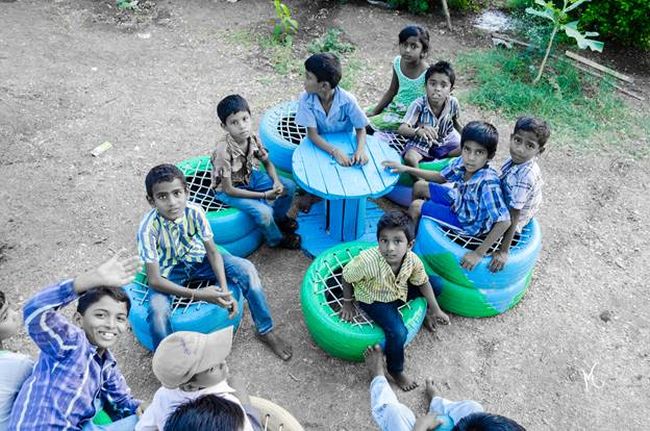 Recycling A Challenge In India 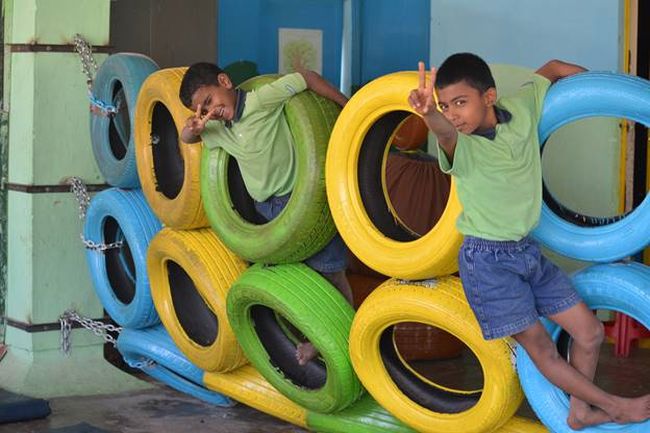 Cheap yet environmental friendly – that’s Anthill creations for you

Apart from giving children the most basic thing – a playground the organisation is educating children learn about the concept of recycling and sustainability from an early age by building these eco-friendly and sustainable playgrounds.

Doing this is the natural choice among all of us. We have to look after the planet where we live, that’s the most basic thing one can do. We are recycling just a bit of waste – tyres and metals. Everyday products like plastic bags, carry bags, plastic bottles too can get recycled, one just needs to start this process, added Pooja. 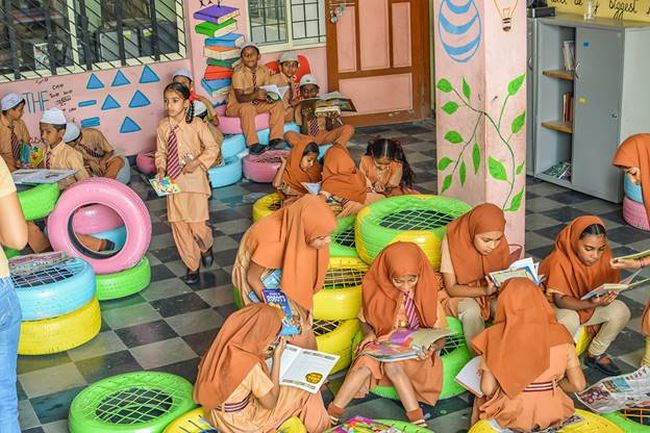 Move over playgrounds, the organisation is also building libraries for students by using scrap items

The company plans to reach each and every corner of India thereby promoting the idea for recycling and reusing. The waste warriors of Anthill Creations sign off by saying,

It is the right time to opt for recycling as there is lot of buzz and awareness about the concept among people. Playgrounds made of scrap items are definitely a new concept, but we think India is ready for this innovation.

Swachh Kadam: This Mumbaikar Is Recycling Shoes To Tackle The Problem Of Waste

From Stabilisation Ponds To Artifical Wetlands: 5 Wastewater Management Models Across The World For India To Follow