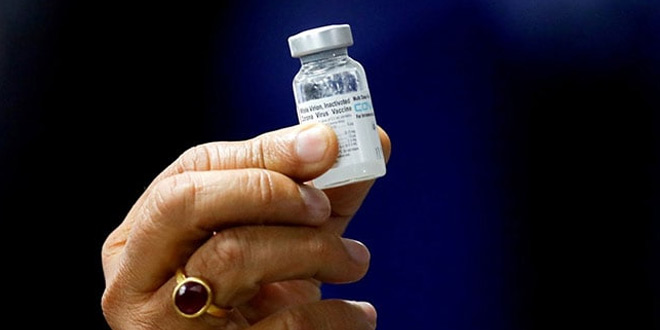 "No paracetamol or painkillers are recommended after being vaccinated with Covaxin," Bharat Biotech said

New Delhi: Bharat Biotech on Wednesday said no painkillers or paracetamol are recommended after being vaccinated with its COVID-19 vaccine Covaxin.
Stating that it has received feedback that certain immunisation centres are recommending taking three paracetamol 500mg tablets along with Covaxin for children, the company clarified that such a step was not required.

No paracetamol or painkillers are recommended after being vaccinated with Covaxin, Bharat Biotech said in a tweet.

Paracetamol was recommended along with certain other COVID-19 vaccines and is not recommended for Covaxin, it asserted.

Through our clinical trials spanning 30,000 individuals, approximately 10-20 per cent individuals report side effects. Most of these are mild, resolve within 1-2 days, and do not require medication. Medication is only recommended only after you consult a physician, the company said.

Last month, the Drugs Controller General of India (DCGI) had granted emergency use authorisation to indigenously-developed Bharat Biotech’s Covaxin for children above 12 years with certain conditions.

Also Read: Third COVID-19 Wave In India: Where Do We Stand And What’s The Road Ahead?

Prime Minister Narendra Modi had announced that vaccination against COVID-19 for children between 15-18 years would start from January 3.Subsequently, India opened up vaccination for the 15-18 years age-group on Monday and so far over 85 lakh beneficiaries in the category have received the first shot.