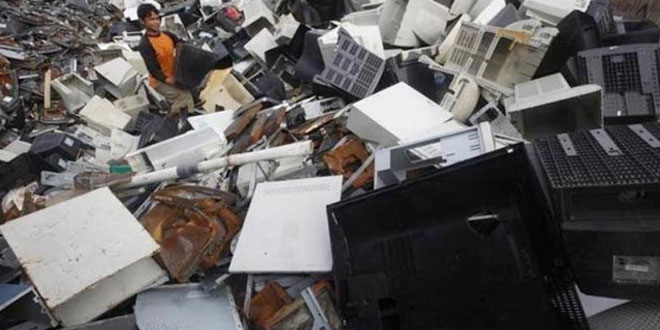 The reality of the threat of India requiring city sized landfills to dispose its waste is gaining ground every day, though several attempts are being made to keep erratic waste disposal in check. Amidst the talks on plastic, dry, wet, biodegradable and non-biodegradable waste, the crucial topic of electronic waste is often forgotten, though e-waste is as hazardous as any other types of waste. India’s e-waste recycling numbers are low, as a mere 1.5 per cent of India’s 18 lakh metric tonnes of annual e-waste is recycled. Initiatives are however being taken to regulate disposal of e-waste and increase the rate of recycling.

Under the ‘Digital India’ initiative, apart from ensuring that India transforms into a digitally empowered society, the Union Government has also taken a look at the problem of e-waste with seriousness. In order to tackle the growing problem of e-waste and general lack of awareness about it, The Ministry of Electronics and Information Technology (MEITY), in partnership with Consumer Electronics And Manufacturers Association (CEAMA), National Association of Software and Services Companies Foundation (NASSCOM) & Maharaja Agrasen Institute of Technology (MAIT) has decided to launch a comprehensive campaign on e-waste management. Northeast India, a big generator of e-waste has been prioritised as a region which needs immediate attention. Guwahati in Assam and Imphal in Manipur were identified as potential cities in northeast India where sensitisation on e-waste could begin.

A 2015 study by Toxic Link, a Delhi based environmental NGO, estimated that Assam produced nearly 14,000 tonnes of e-waste every year. Meghalaya, another northeastern state was estimated to be producing nearly 500 tonnes of e-waste every year. Assam is the sixth largest e-waste producing state in India. Mumbai tops the list as it generates an estimated 1,20,000 tonnes of e-waste annually. Delhi and Bengaluru rank second and third, with 98,000 and 92,000 tonnes respectively. These alarming numbers were primarily because awareness regarding the hazardous nature of e-waste is low across all northeastern states. In a collaborative workshop held in 2016 in Guwahati, officials from the State Pollution Control Boards (SPCBs) of all the seven states of northeast India came together and explained why e-waste was speedily becoming a threat to this part of the country. The principle problem identified was how e-waste and municipal waste was disposed of together and often burnt together in informal scrap yards. The hazardous gases emitted because of such activities had severely negative and lasting impacts on both environment and health.

Assam is one of the biggest producers of e-waste in the northeast region. The e-waste problem in Assam is persistent because firstly there is lack of awareness among electronic goods sellers and garbage collectors. Secondly most of garbage collection in Assam is an informal sector, from the employment of collectors to the scrap yards. These result in unmonitored collection of waste, which often results in e-waste and other waste being mixed up and burnt together, said Professor Dhruba Jyoti Saikia, Vice Chancellor, Cotton College and convener of the first E-waste awareness campaign in Guwahati.

Despite E-Waste Management Rules being revised in 2016, focussing on better handling of e-waste and holding e-waste generators accountable, the awareness on e-waste in Assam is still at a nascent stage. Through the collaborative campaigns, the Assam government plans to take several steps to ensure that collection of e-waste is regularised, e-waste is not disposed in landfills along with other municipal waste and create more awareness about e-waste so that people do not discard electronic items along with other waste.

The state government will also tie up with the municipalities to ensure that garbage collectors deposit e-waste in e-waste collection centres and do not take them to landfills. The government also plans to conduct awareness campaigns for garbage collectors to help them identify what qualifies as e-waste so that they are able to distinguish between e-waste and other types of waste. Similar campaigns have also been held in Guwahati to make residents aware of the problems related to e-waste and requesting them not to dispose discarded electronic items along with usual waste. In the first awareness campaign held at Guwahati in May 2017, over 1,250 school students from 15 schools in Guwahati, along with teachers were present to discuss the hazards of e-waste and potential solutions which could be practised.

Assam can become the chief coordinator among northeastern states when it comes to tackling e-waste. We have a Vision 2020 which focuses on setting up of e-waste collection centres across major cities in the state, collaborating with civic bodies to collect e-waste and set up an exclusive e-waste recycling plant. Doing these will definitely help us tackle the large amount of e-waste generated every year by Assam, said B.K. Baruah, Member Secretary, Pollution Control Board, Assam.

The lack of proper e-waste recycling plants in Guwahati is still a matter of concern and attempts are being made to set up at least one by the end of the year, specifically for treatment of e-waste. The government is hopeful that e-waste from other northeastern states can also be treated in the Guwahati recycle plant. The northeastern region remains one of India’s eco-sensitive regions, but to sustain its ecological richness, the threat of e-waste must be strategically dealt with soon.

Also Read: This Social Enterprise In Bengaluru Is Recycling E-Waste

Hyderabad’s Rajendranagar, Has Got 100% Success In Segregating Waste And Ensuring Garbage Collector Is Paid