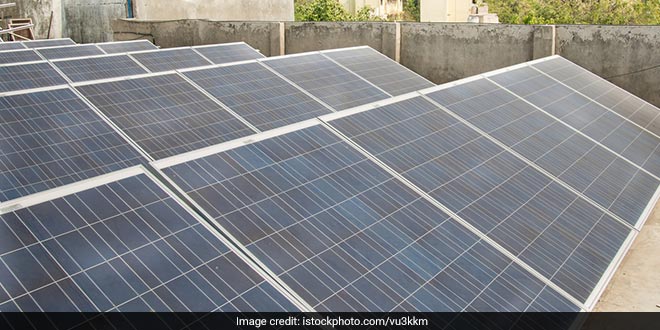 New Delhi: “Sir Norman Foster, a high-tech architect from Britain once said that solar power is not about fashion or making a statement, it is about survival. We as town planners aspire to implement this and tap in the most powerful source of energy for a brighter future and reduce our carbon footprints”, said Koteswar Rao, Assistant City Planner, Karimnagar Municipal Corporation, Telangana while talking about a rule that will be implemented soon in the city. As per this rule, Karimnagar, Telangana’s smart city is going to make it mandatory for all new commercial establishments, houses, apartment complexes, and community halls to install solar panels on rooftops, if their built-up area is more than 2700 square feet (250 square metre).

Also Read: To Make Hyderabad Clean, Young Engineers Are Participating In Clean-Up Activities Over The Weekends

As per the rule, the requisite construction permits will not be granted if there are no provisions to construct solar panels in the building plan. The Municipal body has passed a resolution in this regard in the general body meeting of its elected representatives recently. The resolution has been sent to the state government for its approval which is expected after the general election, said Mr. Rao. The implementation of the rule is expected to start from the mid of June or July and will eventually apply to older structures as well.

The municipal corporation is planning to conduct a series of awareness-building activities like workshops and distributing pamphlets about installing solar panels and the process of registering for net metering. Net metering is the process of sending the surplus energy generated from the solar panel, back to the city’s electricity grid with the power distribution companies buying it at a decided rate. This means that not only will the users of solar energy do away with their own electricity bill and reduce the use of thermal energy, but they will also be paid for this depending on how much of the solar power generated by them remains unutilised and goes back to the grid.

Mr. Rao said that the awareness building activities will start soon after the state government’s approval is received. He further said that while the details about the limits regarding the production of solar energy are not final yet but the civic body may offer a 30% subsidy on the installation process, in a bid to encourage users. For this, the municipal corporation has partnered with the state’s power discom (electricity distribution company) Telangana State Renewable Energy Development Corporation (TSREDCO).

This move is in line with the State’s target to produce 40 GW (Giga Watt) for solar rooftop energy by 2022. According to an estimate, the state was able to produce only 1334 MW (Mega Watt) of solar energy till November 2018. The state laid out its plan for moving towards solar energy under its Telangana Solar Power Policy 2015. As per the policy, “Telangana has vast solar potential with average solar insolation of nearly 5.5 kWh/m2 for more than 300 sunshine days. The government of Telangana intends to make use of the positive environment in the solar market and push given by Government of India for substantially harnessing the solar potential in the state of Telangana.”

For This Teenager, Pollution Makes Her Heart Throb