New Delhi: Hundreds of employees of IT companies across Hyderabad have now taken up the cause of swachhta or cleanliness. They are now working over their weekends to spread awareness about the hazards of plastic usage and to inculcate a habit of segregating waste among the Hyderabad people. And to ensure a Swachh Hyderabad, they go out on the streets to clean the waste littered around roadsides and in empty plots. For the last 18 weeks, since they have started the “Shubhra Hyderabad Movement”, the volunteers, also including students and senior citizens, have managed to collect over 800 kilos of waste. Also, they do door-to-door campaigns to motivate the households to adopt waste segregation practices, and avoid littering any form of waste.

Also Read: Want To Lead A Zero Waste Lifestyle? A 36-Year-Old From Hyderabad Shows How To Cut Down On Garbage 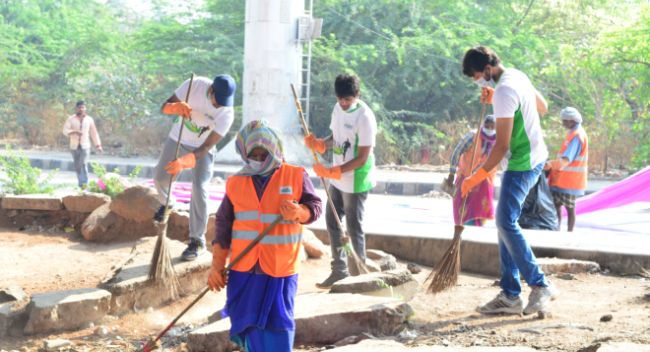 Ever since the inception of the Shubhra Hyderabad Movement in February 2018, they have undertaken the clean-up of wet and dry waste at DLF building Gachibowli, Hi-tech city railway station, Ideal Chervu Lake Kukatpally, Kukatpally Housing Board Colony, followed by Nizampet ground, where they recovered 9 tonnes of plastic litter from the ground alone.

When asked why it is important to spread awareness on waste segregation practices across Telangana’s capital Hyderabad, the founder of the Shubhra Hyderabad Movement, Ravadi Kantha Rao told NDTV that they came across a few cases wherein the households were segregating their waste (wet and dry) but the waste collectors of the Greater Hyderabad Municipal Corporation (GHMC) mixed up the waste when they came to collect it in their swachh autos (pollution free electric autos deployed for garbage collection in the city).

And in some of the houses, we have observed that people don’t use the bins for waste, rather they use it for other household purposes, said Mr Rao.

As per the government data, the waste segregation is at an all-time high in the city at 85 percent, as the GHMC has already distributed two dustbins for waste segregation to almost every household in the city. But with cases wherein the segregated waste is being mixed up at the time of collection, the percentage of waste segregation could decrease, rather than touch 100 percent. And that too when the government has spent over Rs 200 crore in distributing 2,000 Swachh autos and Rs 42 crore for distribution of blue and green bins. Understanding the concern, we initiated this movement to not just campaign for adopting waste segregation practices but also to collect waste so that people can be motivated to not litter around, Mr Rao added.

All of them will do segregation at transfer station because that enables them to earn more. unsegregated waste will not fetch any income .Household segregation will reduce their drudgery https://t.co/eieNI26K4h

As part of the cleanup and waste segregation awareness activities, the volunteers identify certain activities to involve the local residents.

Talking about the cleanliness issue in the city, one of the volunteer Naveen Sagar Korukanti said:

All of us want swachh Hyderabad but nobody wants to get dirty. So I decided to set a trend by volunteering for Shubhra Hyderabad over the weekends to make Hyderabad clean again. Volunteers from companies like Salesforce, TCS, Infosys, Media Mint among others have joined this initiative. I urge everyone in Hyderabad to come forward and participate in the clean-up activities and make swachh Hyderabad a reality.

Also Read: What Happens When Over 15,000 Students Armed With Brooms Start Cleaning Their City? They Make A World Record!

The volunteers are also motivating their friends and colleagues to participate. Revu Eshwar Rao, a senior citizen who joins the weekly clean-up activities said, “I have been volunteering for Shubhra Hyderabad for the past 8 weeks, believing that that the cleanliness issue requires utmost attention in the best interest of our future generations.”

I am motivating my peers and colleagues from Salesforce Hyderabad to be part of this great initiative of transforming #CityHyderabad to #SwachhHyderabad. I pledge an hour a week for my city to participate in the clean-up activities, said Sushanth Gangavarapu, Senior Software Engineer

Notably, Mr Rao along with the volunteers also started ‘#SourceSegregationChallenge’ on World Environment Day to stress the need of segregating waste at the source.

Also Read: A Room Full Of Plastic: Hyderabad To Get An Office Made From Recycled Plastic On World Environment Day

“As part of the challenge, the participants have to segregate dry waste and wet waste in two separate bins and click a picture of the same. The picture then has to be posted on social media by nominating three friends to take part in the campaign. The challenge became viral among GHMC officials as well…  GHMC’s Zonal Commissioner D. Harichandana and Charminar Commissioner, N.Ravi Kiran among others accepted the challenge and gave impetus to the initiative. The British Deputy High Commissioner to Telangana, Andrew Fleming was among the others who were quick to accept the invitation,” said Mr Rao.

In addition to cleanliness activities, the volunteers also work to provide a cleaner air to breathe by planting trees across Hyderabad and in neighbouring villages.

Do Your Bit For The Enviornment, Plant A Tree

Delhites Get Ready For A Walk In This One-Of-A-Kind Park Made Using 25 Tonnes of Scrap and 5,600 Cubic Metres of Muck