India is sitting on the ticking plastic time bomb which is waiting to go off. The improper disposal of plastic waste continues to be India’s biggest problem. India generates around 56 lakh tonnes of plastic waste annually, where Delhi alone accounts for generating around 250,000 tonnes of plastic waste annually. It is estimated by environmental NGO Toxic Links that India’s consumption of plastic rises on an average of 10 percent each year. These disturbing numbers can be alarming but for some it can act as a trigger to do something to resolve the crisis. That is exactly what 40 students of Kirori Mal College (KMC) in Delhi University have done. These students have started their fight against plastic waste through an initiative called Project Patradya which has a two-tier model that works on finding alternate solutions to pervasive, omnipresent, plastic products and empowers women refugees from Afghanistan. The project is supported by a global non-profit and community of students – Enactus India.

Being the students of a college located in the main campus of the University of Delhi, we have seen the heavy dependency of roadside shacks, cafés, restaurants, school canteens etc. on disposable plastic cutlery. Plastic is everywhere, it is the common sight near colleges of Delhi University. Taking the stock of the situation, we started looking for alternatives for disposable plastic cutlery and that is when, the notion of edible utensils caught our attention, says Shivam Shukla, President, Enactus chapter of Kirori Mal College.

Can you imagine the cutlery that is made of multigrains including wheat, rice, and jowar? Thanks to this group of people, it has now become possible. They are making a range of products including cups and bowls.

We are working with team of professional bakers in order to get the perfect recipe for the edible products. Proper proportion of each ingredient is the key we use to make the dough, and then it is gradually turned into sheets and then set in moulds. Voila, the end result is – cutlery that you can eat too, explains Shivam Shukla.

What’s great is that the edible products come in a range of flavours including chocolate and mint.

The fact is simple – plastic cannot be digested by earth. End Results – All the plastics used ends up getting dumped into the landfills which are already overflowing and are way past their limit in most of the cities.

Being edible items, the shelf-life of these products is up to 20 days and they have been certified fit for human consumption according to the Food Safety and Standards Regulations. Adding to the many benefits, if the user doesn’t feel like eating the cutlery then it can be planted, result – there is zero-wastage.

Plastics take around 500 to 1000 years to degrade due to the presence of complex polymers and it can destroy marine life completely. On the other hand, 250 edible bowls save around 1 kg of plastic. Not only that, by reducing the production of plastic by 1 kg, one can save nearly 3.5 kg of CO2 from being emitted out in the environment. End results – Edible cutlery can really save our depleting planet. 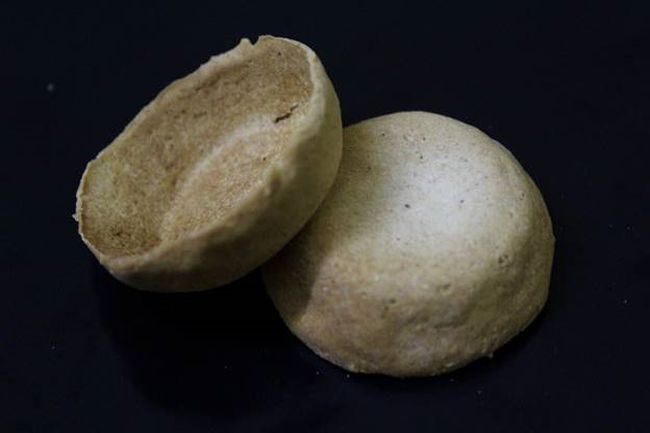 India is home to around 2,00,000 refugees, this project is also helping reintegrate women affected by war back into society simply by empowering them by providing employment opportunities. The project employed only women refugees to make cutlery that are both edible and biodegradable.

Towards A Green Future

Currently, edible cutlery is not out in the stores yet. People who want to do their bit towards the society can simply go on to the project Facebook page and can place their orders. The cost of the bowls ranges from the size of the bowl, starting from Rs 5 per piece till Rs 8 per piece.

Owing to the cost advantage of plastic utensils over their edible counterparts, it is difficult for our product to penetrate into the markets as of now. The idea is completely new and, therefore, it will take time for people to be completely aware of such alternatives available in the market, added Shivam Shukla.

The project has been started on a very small level, but the aim of the team is to substantially replace plastic in the next 5 years.

The group wants to completely remove the harmful toxin – plastic from our fast degrading environment and signs off by saying,

We would like other organizations also to emulate the idea and join us in our war against plastic. Only then, it will be possible to replace something as omnipresent as plastic.

According to the Housing and Urban Affairs Ministry, indicators under Swachh Survekshan 2021 focus on parameters pertaining to wastewater treatment and reuse along with faecal sludge management