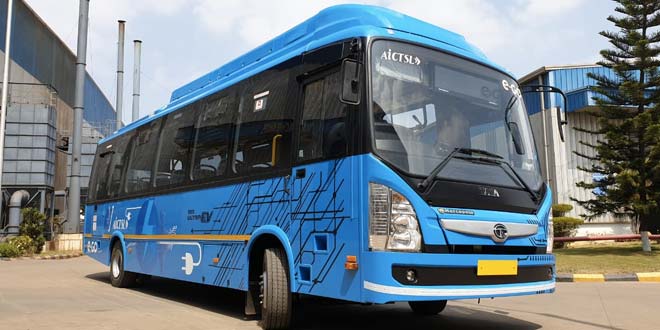 New Delhi: After establishing itself as ‘India’s cleanest city’ for three years in a row, Indore has taken its cleanliness initiatives a notch higher by opting for clean mobility for its public transport fleet. Indore’s Atal Indore City Transport Service Limited (AICTSL) has procured 40 electric buses in the city as part of its public bus service. These buses will be deployed for intra-city commute and will become operational by the end of March.

According to Rahul Shrouti, Manager Technical and Operations, AICTSL, electric buses are 9 metre Air-conditioned electric buses called ‘Ultra electric buses’. Manufactured by Tata Motors, these buses have a travelling range of up to 150 kilometres on a single charge. The Mr. Shrouti said,

We are procuring electric buses from Tata Motors which is an indigenous brand in order to support domestic products instead of the Chinese e-buses available in the market. One bus has already been deployed on the Palasia to Rajwada route in the city for demonstration and the rest 39 will be deployed on other routes soon. Other tentative routes include Railway station to Airport, Malwa Mill to Chandan Nagar, Teen Imli to Chanakyapuri, Gangwal to Khajrana, Hawa Bangla to Bandeshwar Kund.

Mr. Shrouti further informed that these e-buses are air-conditioned, have modern interiors and comfortable seats for 31 passengers and one driver. The bus can accommodate almost 20 standing passengers comfortably as well.

For the smooth running of the buses, Tata Motors, which has recently supplied e-buses to Lucknow and Kolkata as well, has installed a charging station at the Indore main bus depot for fast charging of the buses. According to Mr. Shrouti, these e-buses take about 90 minutes to two hours for charging 100 per cent. As per Tata Motors, the unique feature of these buses is that the lithium-ion batteries have been fitted on the rooftop to prevent breakdown due to waterlogging.

While initially, the fare of e-buses will remain the same as that of the conventional buses. AICTSL is planning to bring 100 more of these zero pollution, zero-noise, electricity powered e-buses by the end of this year.

Tata Motors has always been at the forefront of the E-mobility evolution and this order to India’s cleanest city is a testament of our best-in-class solution tailored for the bus segment in India. The order is part of the 255 e-buses to be supplied to six public transport undertakings in the country, of which AICTSL is one.

Apart from deploying electric buses, Indore Municipal Corporation (IMC) had also taken up another an initiative last year to promote cleaner alternatives to diesel under which it produced cleaner bio-CNG (Compressed Natural Gas) fuel which is being used for powering as many as 20 buses in the city at present. The bio-CNG is being generated from the organic waste collected from the vegetable market- Devi Ahilyabai Holkar Mandi.

According to Asad Warsi, Swachh Bharat Mission Consultant, IMC, 20 metric tonnes of waste is generated in the vegetable market. With the help of this waste, 1,000 kgs of bio-CNG is generated. IMC has also installed a generator of capacity 125 KWH (Kilo Watt Hour) to be run on the bio-CNG produced by to generate electricity. He said,

Not only are we producing a cleaner form of fuel for running vehicles in the city and generating electricity, but we are also re-purposing the organic waste under this initiative. We will be expanding such initiatives to reduce our carbon footprints along with converting waste to wealth.

Automobile Is Bigger Polluter Than Firecrackers: Supreme Court On Blanket Ban On Crackers