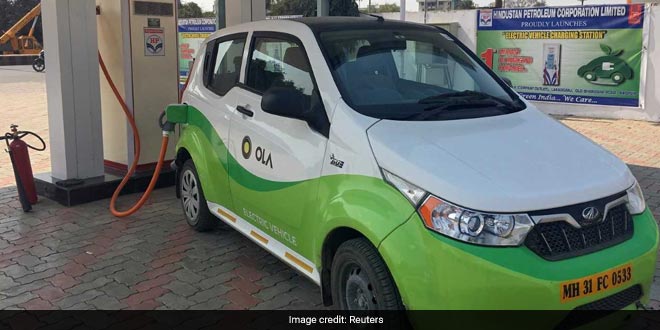 New Delhi: The newly launched FAME II (Faster Adoption and Manufacturing of Electric Vehicles) in India for promotion of electric mobility lays emphasis on electrification of the public transport including shared transport like cab services and aims at building robust infrastructure for charging electric vehicles (EVs). As the government pushes electrification of public mobility by including electric vehicles into its Vision 2030, cab services in India like Ola are shifting towards electric vehicles. India’s leading mobility platform Ola, has raised a sum of Rs. 400 crore to fund its electric mobility business – Ola Electric Mobility Pvt Ltd.

According to the statement released by the cab service provider, Ola Electric Mobility Pvt Ltd. was initially established to enable Ola’s electric mobility that is battery run cabs as a pilot program in Maharashtra’s Nagpur. In 2018, Ola announced ‘Mission: Electric’ to introduce a fleet of one million electric vehicles on Indian roads by 2022. Currently, the company is running several pilots to deploy electric vehicles and charging solutions, including battery swapping stations, electric two-wheeler and three-wheeler services amongst others.

The first problem to solve in electric mobility is charging: users need a dependable, convenient, and affordable replacement for the petrol pump. By making electric easy for commercial vehicles that deliver a disproportionate share of kilometers travelled, we can jumpstart the electric vehicle revolution, said Anand Shah, Head of Ola Electric Mobility.

Ola Electric has already partnered with several OEMs (Original equipment manufacturers) and battery manufacturers and aims to work closely with the automotive industry to create seamless solutions for electric vehicle operations, reads a statement released by the company.

Ola is not the first one to step into electric shared mobility service. Earlier in January, Gensol Mobility introduced India’s first all-electric cab services ‘Blu-Smart’. In the first phase, Blu-Smartcabs that will be using Mahindra e-Verito cars will induct 70 electric cabs in Delhi, Noida, Greater Noida, Gurugram (Gurgaon), Aerocity, Sonepat and other areas in and around capital Delhi. By March, the company plans to scale up the fleet of electric cabs to 500.

Also Read: Travel To Airport In An Eco-Friendly Way As Hyderabad Plans To Launch A Fleet Of 40 Electric Buses

Talking about the impact of shared mobility going electric, Ahtaysham Kham, spokesperson of EESL, a government-owned company that has been tasked to initiate EVs across India, says,

To make people familiar with the EVs and have electric mobility penetration in a country, electrification of the public and shared mobility is an important step. In China and Norway also, it was the shared mobility that pioneered in electric mobility. Once people experience the technology, get used to it and as their confidence in the technology would increase, the adoption of EVs for personal use will also increase. Thus in India, government and private undertakings have to electrify their fleets.

India To Generate Over 5 Million Tonnes Of E-Waste Next Year: ASSOCHAM-Ernst and Young Study

India Projected To Be On Track To Achieve Its Paris Climate Change Agreement Target: US Expert