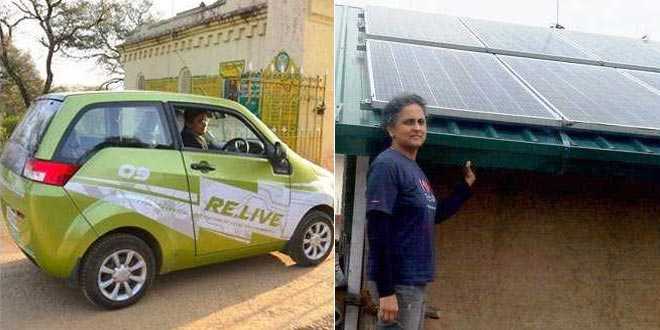 New Delhi: “Gandhi ji once said, be the change you want to see in the world.  I and my family are trying to build an eco-friendly world around us. Switching to electric vehicles is one of the most important steps towards that, better still, drive electric vehicles powered by solar energy and reduce the use of fossil fuels at every level,” says 40-year-old Soumya Prasad, an ecologist based in Dehradun. Ms. Prasad has been driving electric vehicles since last four years and practices eco-friendly lifestyle including using solar power for household energy needs, growing a kitchen garden, and waste management at home.

Ms. Prasad bought an electric car, a Mahindra e2o, in 2015 when she was teaching ecology at Jawaharlal Nehru University, Delhi. Being a scholar of this discipline, ecology left a deep impact on Ms. Prasad. She has spent many years living close to nature, in forests, studying birds, animal, and plants for her research. Therefore, living in a sustainable way and working towards preserving nature, came to her naturally. 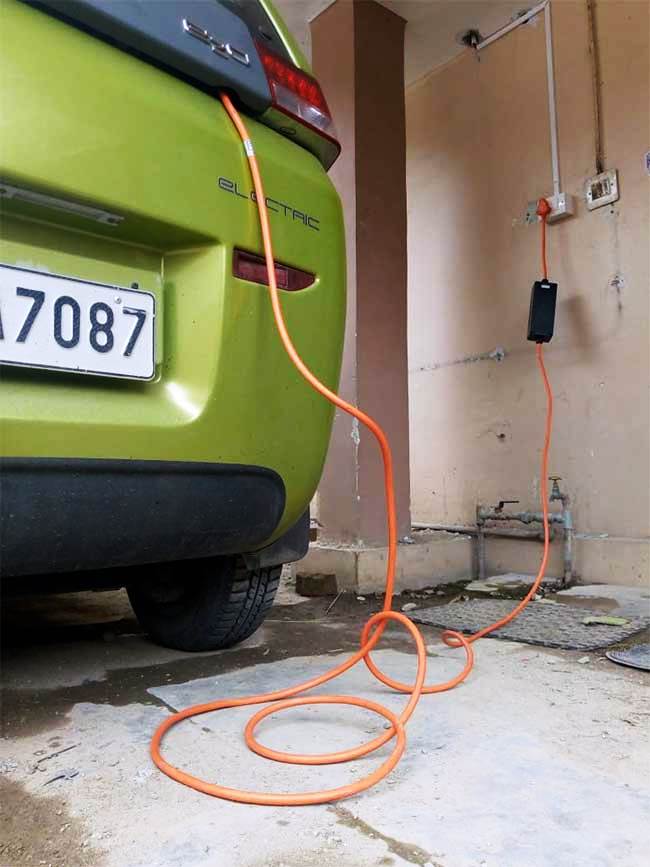 Also Read: Worried About The Impact Of Her Own Actions On The Environment, This ‘Supermom’ Decided To Make Eco-Friendly Diaper Alternatives

According to Ms. Prasad shifting to electric vehicles has been a great experience for her. Talking about how she managed to drive an EV in the Delhi of 2015, where electric vehicle was an almost an alien concept, and no public EV chargers were in place unlike now, she said,

I was a little difficult at first because the vehicles and the technology were very new for me. But eventually I mastered the technology and even in a city with no public charging station, I was able to drive an EV daily for my chores and work-related travels, perfectly fine without any anxiety.

While Mahindra’s e2o gives an average of 110 kilometres of one full charge, there have been times that Ms. Prasad was able to get more mileage out of her car. Talking about getting most out of an EV, she said, “I have even driven my car for 180 km on a single charge because of its regenerative braking feature. If one drives smartly and understands the regenerative braking, one can definitely get more out of their EVs. Even when you are stuck in traffic, your car will be charging itself, though slower as compared to electric power. Once I was stuck in a massive traffic jam for four hours with less than 30 per cent battery and I still had a considerable distance to go which I could manage perfectly fine.” Almost all EVs have a regenerative braking feature or the energy recovery mechanism which means that when brakes are applied to slow down the vehicle, energy produced due to the friction caused by the brakes is converted in kinetic energy which can either be used immediately or can be stored in vehicle’s battery.

Ms. Prasad got her second EV, a more than 10-year-old Hero Electric’s e-scooter from her uncle after his demise, a few years back. As per Ms. Prasad, EVs are perfect for daily intra-city travels and traveling to nearby towns. But she also says that EVs are good for long distance travels as well. Ms. Prasad and her husband have had many long distance trips in their e-car from Delhi to Dehradun, Delhi to Rajasthan and have even climbed mountains by traveling from Dehradun to Mussorie. Ms. Prasad’s e-car became the first privately owned electric vehicle to enter the Sariska Tiger Reserve. Ms. Prasad says, 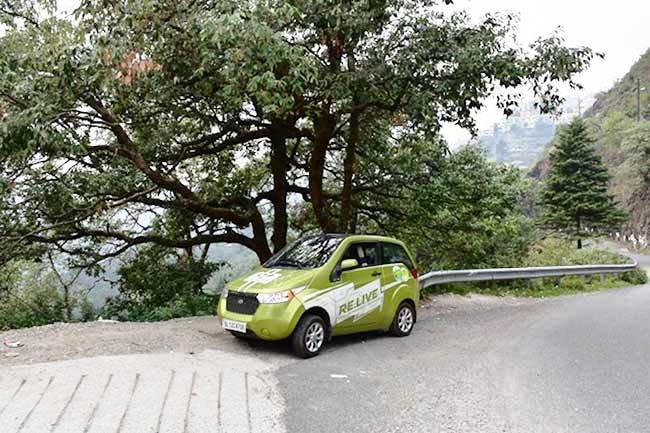 As per Ms. Prasad, electric cars are not only good for inter-city travels but are great from long distance travels as well

According to her not only are these vehicles eco-friendly but very economical too, especially when charged on solar power. “EVs are easy to operate unlike the perception of many people who think that EVs may cause trouble by getting discharged before reaching the destination or far from a suitable charging point,” she says.

When she shifted to Dehradun in 2017 to work as a research associate at Nature Science Initiative, Ms. Prasad got solar panels installed in her house to further her efforts towards living a green lifestyle. Ms. Prasad and her family were introduced to using solar energy by her father. She recalls,

My father has a seven kilowatt solar power plant at his house and he has been using solar energy for meeting household power need, for years. This was also one of my inspirations that I decided to go the solar way to reduce my carbon footprint. 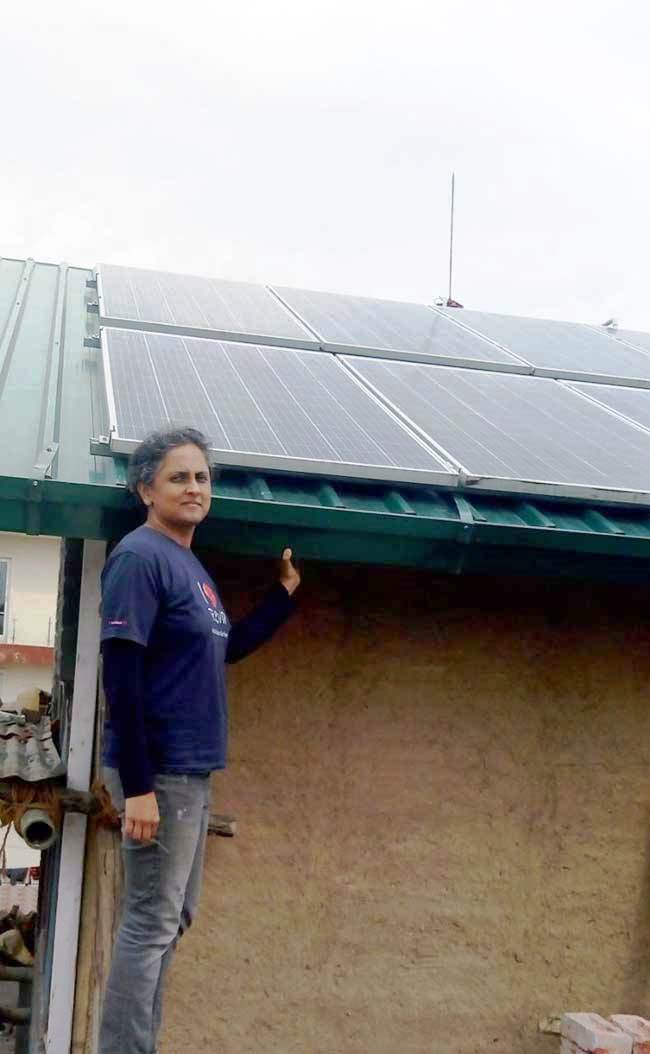 Ms. Prasad got solar panels installed in her house to further her efforts towards living a green lifestyle

According to Ms. Prasad, her e-car takes about 10 kilowatt per full charge. According to her daily travel needs, she mostly charges her e-car once in three days. For running her EVs, Ms. Prasad used to spend 60-70 paise per km before she started using solar power. After bringing solar energy at home, she is practically driving her vehicles for free. She says,

After installing solar panels which costed one time installation amount of Rs. 26,000 per kilowatt, we don’t get electricity bills now. In fact, we give back more electricity to the power corporation of Dehradun through the grid than what we withdraw from it.

Apart from practicing an eco-friendly lifestyle at home, Ms. Prasad works towards building awareness about electric vehicles and solid waste management. Not only this, she, along with her husband, who is also an ecologist, also spend their spare time fermenting various grains and fruits, and travelling to remain closer to nature.

Swachh Survekshan 2019: And The Award For Cleanest State In India Goes To..Chhattisgarh!