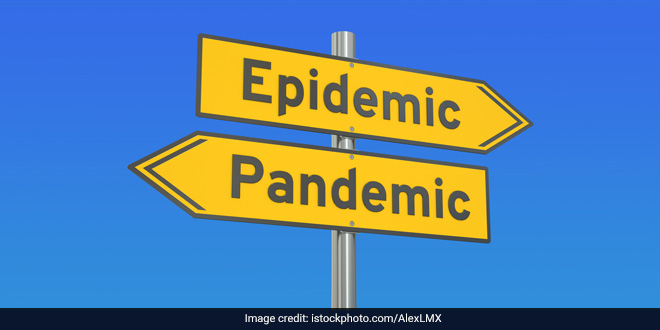 New Delhi: The novel coronavirus, which was first reported in China’s Wuhan on December 31, 2019, was declared a global ‘pandemic’ on March 11, 2020 by the World Health Organization. The outbreak was first declared a Public Health Emergency of International Concern on 30 January 2020. A public health emergency (PHE) implies a situation that is serious, unusual or unexpected; carries implications for public health beyond the affected State’s national border; and may require immediate international action.

Before March 11, the COVID-19 was being called as an epidemic by the organisation.

In general English, epidemic is used to describe a problem that has grown out of control. WHO defines epidemic as an outbreak of a disease that spreads quickly and affects many individuals at the same time. An epidemic is an event in which a disease is actively spreading.

Epidemics are often an increase in the number of disease cases that was not anticipated. An outbreak can occur in a community, geographical area or several countries.

The term pandemic, on the other hand, relates to geographic spread of the disease. A pandemic affects a wider geographical area, is often worldwide and infects a larger number of people as compared to an epidemic.

Pandemic are also often caused by a new virus or a new strain of virus that has not circulated within people for a long time. Humans have little to no immunity against the virus and it spreads quickly, causes more deaths and often creates social disruption and economic loss.

In conclusion a pandemic is an epidemic on a global level. WHO explains that an epidemic becomes a pandemic when it spreads over significant geographical areas and affects a large percent of the population.

Coronavirus Outbreak Explained: What Are The Different Stages Of COVID-19 Transmission