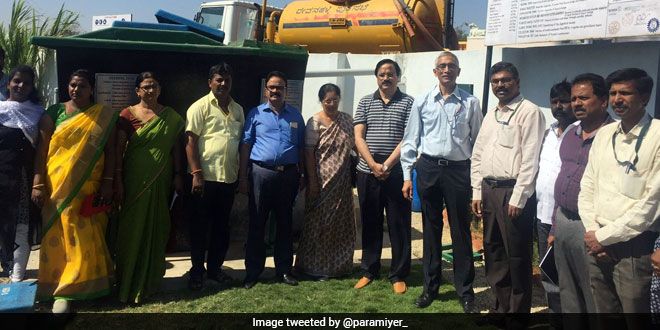 New Delhi: Devanahalli, a small municipality located 40 kms outside of Bengaluru, earns praise from Param Iyer, Secretary, Ministry of Drinking Water and Sanitation, for providing end-to-end solutions for faecal sludge management (FSM) using a faecal sludge treatment plant (FSTP). The plant alleviates the problem of waste management in Devanahalli that don’t have an underground drainage system, and most households use onsite collection systems such as septic tanks and pits, which once filled get cleaned by desludging vehicles, called honey-suckers. The FSTP not just provides a safe delivery point for the waste being collected from about 5110 septic tanks but also avoids the typical nuisance causing factors like odour and poor aesthetic associated with waste treatment plants.

Mr. Iyer who visited the facility earlier this March took to Twitter to laud the functioning of this FSTP and said, “Interesting and useful visit to the well run and managed Devanahalli fecal sludge treatment plant this morning. The model is worth considering for replication in large and densely populated Gram Panchayats.”

In terms of operation, the plant functions wholly on the basis of biological treatment without the involvement of chemicals. The raw sludge from septic tanks or pits is brought by a desludging vehicle to the plant, where it gets poured into a feeding tank, which further pours the sludge into a biogas digester for the sludge to stabilise and post filtration is treated. 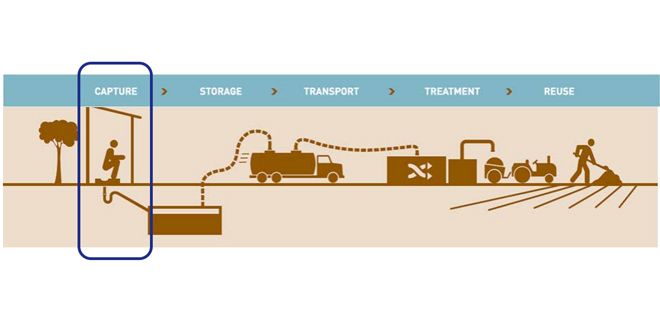 Designed to handle waste from a population of over 30,000 people, the plant treats faecal matter in a natural, cost effective and energy efficient way, with minimal operation and maintenance requirements, said an engineer of the Devanahalli Town Municipal Council.

The unique characteristic of the FSTP is that it is built on existing collection and conveyance systems. By using the available desludging services retrofitted with an environmentally sound disposal solution, safer fertilisers could be delivered to farmers and risk of contamination of open lands due to unsafe dumping was minimised. Furthermore, the plant has low operational and maintenance costs, as it runs on gravity and does not use of electricity or any chemical additives. 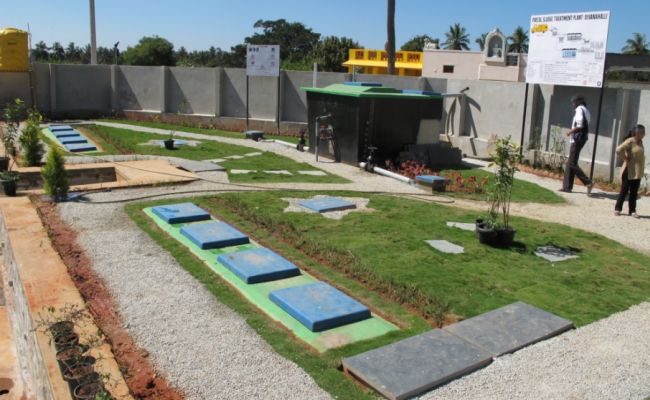 The plant has low operational and maintenance costs, as it runs on gravity and does not use of electricity or any chemical additives

Currently, about 2,000 to 2,200 litres of sludge gets treated daily. Later, this is mixed with organic municipal solid waste to produce compost, which – after quality tests – is sold to farmers for agricultural use. Other by-products are the daily generation of 300 litres of biogas, used for cooking by the plant’s operator, as well as wastewater that is reused on the spot to irrigate the plant’s landscape.

The FSTP is being operated by Devanahalli Town Municipal Council, and was developed in collaboration with Bengaluru-based not-for-profit Consortium for DEWATS Dissemination (CDD) Society and the German NGO Bremen Overseas Research and Development Association (BORDA) for this project.

Adapted to local situations, the Devanahalli approach has been replicated in different locations. Even the Municipal Committee of Leh was impressed with the functioning of the plant and built a similar plant in Leh, with the help of the same stakeholders.