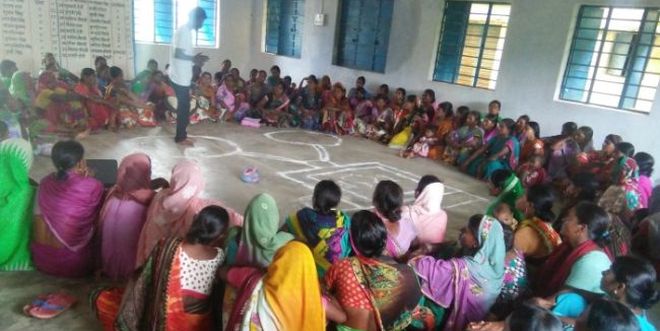 New Delhi: For years, the men of Barkadih gram panchayat in Jharkhand’s Latehar district took sanitation lightly and despite the absence of functional toilets didn’t pay heed to the sanitation needs of the village women. Much did not change despite the district administrative officials’ awareness building activities. But the women of this village came forward and decided to finalise on a life of dignity and safe sanitation. Under the leadership of Lailavati Devi, a Swachhta Didi from Mamta Self Help Group, they met and discussed sanitation issues, knowing that it was up to them to bring about behaviour change in their families – as the men could not be relied upon to do the job. Together, they ensured that everyone in the village had access to toilets, which they call Izzat Ghar or house of dignity.

Having practiced open defecation for ages, the people of Latehar district, which is predominantly a hilly region covered by forests, were used to defecating in an open area or in the jungle, even though they had to walk more than 300 metres to find a suitable spot. During the initial days of the Swachh Bharat Mission Gramin (SBM-G) campaign in October 2014, the sanitation coverage of the Latehar district was recorded a a poor 35.42 percent.

In a bid to improve its sanitation coverage, the district administration carried out various awareness building and triggering exercises like ‘walk of shame’ (walking with community to the sites of open defecation), putting faeces on the floor in front of people and discuss the way flies move between food and faeces and how they are unknowingly eating faeces which has a negative impact on their health, that emphasised the need to adopt safe sanitation practices. But nothing worked out as man paid scant attention to the issue. However, the agenda of safe sanitation began to move forward when women took interest in the movement.

When we realised that women are interested in this cause and are putting in necessary efforts to convince their family members to stop the age-old practice of open defecation, and are even willing to get trained to construct toilets on their own, we provided them with all the necessary support, said the Sandeep Dungdung, Zila Swach Bharat Prerak, Latehar.

The district administration then provided masonry training to women and connected them with self-help groups to construct toilets.

When we started working for the Swachh Bharat campaign in 2016, we initially faced some resistance from people, who were discouraging enough to convince a few women to not participate. However, when we constructed a few toilets on our own as per the training provided by the swachh officials, the women who earlier refused to participate under the influence of their family members or others, changed their minds and joined us in the cause of safe sanitation for all, said Lailavati Devi.

When all the women from the village stuck together and went ahead with building a total of 414 Izzat Ghars (toilets), the sanitation coverage improved to over 98 percent in the Barkadih village.

“Nearly all of us have a toilet facility at home, and those who don’t have one are being welcomed to use the available toilet nearby. With community participation, we have now ensured a toilet facility for all of us. We are delighted that we don’t have to go out to relieve ourselves, Lailavati Devi further said.

Also Read: Jharkhand’s Open Defecation Free Mission Gets Off To A Good Start In 2018, Hazaribag To Join The List of ODF Districts In The State

Owing to the last monsoon, the toilet construction was delayed but the district officials are hopeful that before March 31 they will be able to provide an individual household toilet to everyone, thus declaring the both the village and district with sanitation coverage 99.77 percent fully open defecation free.

In terms of sanitation coverage, Jharkhand has been an average performer. With the construction of over 21 lakh (21,48,536) toilets, the state’s sanitation coverage has raised from 30.12 percent in 2014 to 70.82 percent. The state has set itself a deadline of going open defecation free (ODF) by October 2, 2018.