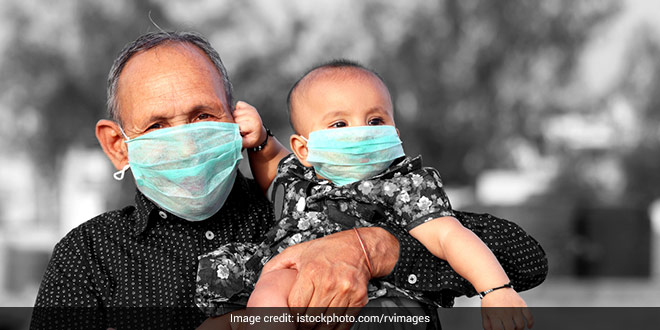 New Delhi: The government on Monday (November 2) attributed the sudden surge in COVID-19 cases in Delhi to the festive season, greater movement of people along with laxity in adhering to safe COVID behaviour, and said efforts will be made for testing, contact tracing and treatment, especially in critical zones of the city. It also emphasised that Metro travel should be carefully regulated as per the SOPs.

Also Read: AIIMS Director On COVID-19 Spike In Delhi And How Air Pollution Increases The Number And Severity Of Cases

The recent surge in the number of active cases was attributed to the festival season, which has witnessed greater movement of people, accompanied by laxity in adhering to the basic principles of safe COVID behaviour, a Union Home Ministry statement said.

The hospital bed situation was reported to be comfortable with 57 per cent of the 15,789 dedicated beds being vacant, it said. While the new COVID-19 cases and total active cases are going up, the administration in Delhi is focusing on testing, contact tracing and treatment. It was, however, highlighted both by the Delhi government officials and Delhi Police Commissioner that there has been no let up in enforcement and awareness generation.

The strategy to contain the spread of COVID-19 in Delhi, especially keeping in view the festival season and decreasing temperatures accompanied by rising pollution, was discussed at length with representatives of the Ministry of Health and the health experts, who were also present in the meeting.

It was decided to concentrate efforts in certain key areas, such as targeted RT-PCR testing in sensitive and critical zones such as restaurants, market places, barber shops and salons; gear up the availability of medical resources including beds, ICUs, and ventilators as a preemptive measure and ensure high degree of contact tracing along with monitoring of quarantined contacts so as to suppress and break the chain of transmission, the statement said.

It was also decided to enhance enforcement selectively, accompanied by greater awareness creation through targeted IEC (Information, Education and Communication) campaigns and ensuring that all cases under home isolation were monitored and shifted to hospitals well in time, before any deterioration in their medical condition, it said.

It was also emphasised that Metro travel should be carefully regulated, strictly in accordance with the standard operating procedure (SOP) that has been issued in this regard, the statement said. The Union home secretary, while appreciating the efforts of the Delhi government officials, emphasised that the strategies for containment of spread of COVID-19 in Delhi should be strictly enforced and implemented.

Mr. Bhalla stressed the need for reaching out to the residents of Delhi to sensitise them about safe COVID behaviour through RWAs, ‘mohalla’ and market committees, public announcement systems, message on police vehicles among others.

He also informed that the situation in Delhi would be reviewed again in the coming week, along with other districts of the National Capital Region (NCR). The meeting was attended by V K Paul, Member, NITI Aayog, Secretary, Ministry of Health, Director General, ICMR, Chief Secretary and other senior officers of the Delhi government and the Delhi Police Commissioner.

The Delhi government also made a presentation on the current situation of COVID-19 in the city. The national capital recorded 5,664 new COVID-19 cases on Sunday, taking the infection tally to over 3.92 lakh, even as the positivity rate jumped to nearly 13 per cent. The death toll has risen to 6,562 with 51 more fatalities.

Sunday was the fifth day on the trot that the city reported over 5,000 new cases amid festivities and rising pollution in the city. A total of 5,062 new cases were reported on Saturday, 5,891 on Friday — the highest so far — 5,739 on Thursday and 5,673 on Wednesday.

The number of deaths reported on Sunday was the highest in the last five days. The city reported 41 deaths on Saturday, 47 on Friday, 27 on Thursday, 40 on Wednesday, 44 on Tuesday and 54 on Monday. As many as 44,623 tests were conducted to detect COVID-19 infection on Saturday, of which 14,347 were RTPCR tests and 30,276 rapid antigen tests. A total of 47,25,318 tests have been conducted in the national capital so far – 2.48 lakh tests per million population.

In June, when COVID-19 cases were on rise in Delhi, Union Home Minister Amit Shah swung into action to handle the situation after criticism in different quarters over the Delhi government’s handling of the crisis.

At that time, there were complaints of non-availability of beds in hospitals for patients and difficulty in getting the tests done in laboratories. By leading from the front, the home minister improved the facilities by increasing the daily testing, increasing hospital beds and setting up temporary hospitals and COVID care centre.

A committee, set up by Shah, also fixed the rates for testing, private hospital beds, ICUs and isolation beds. On June 18, at a meeting, the home minister had said a common strategy should be framed for Delhi and NCR to tackle the coronavirus pandemic and had added that the suburbs like Gurgaon, Noida and Ghaziabad can’t be separated from the national capital in this battle. The sudden spike in COVID-19 cases comes amid festivities and rising air pollution level. While Durga Puja celebrations ended on October 25, the next major festivals are Diwali and Chhath in November.

Also Read: With Rise In COVID-19 Cases In Delhi, Health Minister Satyendar Jain Hints At The Possibility Of The Third Wave