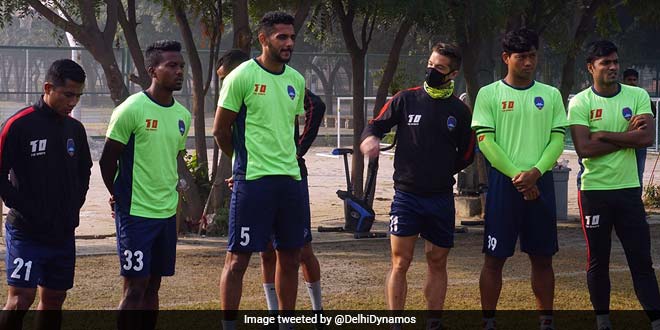 New Delhi: Some Footballers competing in the Indian Super League (ISL) were seen wearing masks while training in Delhi. Delhi Dynamos take on Jamshedpur FC in their second home match at the Jawaharlal Nehru Stadium tomorrow and a couple of players were seen wearing masks during the home side’s training session. Delhi Pollution has been in focus for last few days because of the ongoing third cricket Test match at Feroz Shah Kotla between India and Sri Lanka, the visiting players complained of discomfort due to smog and wore anti-pollution masks on the field. On Day two cricketers Suranga Lakmal and Lahiru Gamage from Sri Lanka threw up because of the uneasiness. On Day 4 Lakmal vomited again, this time on field during the match, as did Mohammed Shami from India.

The official handle of the Delhi Dynamos team tweeted about the team gearing up for the clash with Jamshedpur FC and some players could be seen wearing masks in the pictures posted.

It's Matchday tomorrow! The Lions are getting ready to face @JamshedpurFC in their second home game of the season.
Come and support the Lions at the Den: https://t.co/0csBdz90bs #RoarWithTheLions pic.twitter.com/CAnTwpJt9q

Dynamos coach Miguel Angel Portugal confirmed that his players wore masks but said they will not use them during the match tomorrow.

This pollution is a problem but it’s not solely for the players and me. It’s for the people of Delhi. We have been training with masks, so it is fine. The players will not be donning the masks on match day tomorrow. It is a home and away league and it is our home match. So there is no question of not playing, we have to play here. I will have no objection if a player chooses to wear one,  Mr Portugal said at the pre-match press conference.

Jamshedpur FC coach Steve Coppell said the football matches should not have been held in Delhi during this time of the year though he stopped short of saying that it’s unsafe for players.

“Around Diwali last year, I came to Delhi with the Kerala Blasters team. When we played last year, at that time the measure (level) of particulate matters was over 500. I think it is now 300,” Mr Coppell, who was the head coach of runners-up side Kerala Blasters in the last edition, said

For the last three years I have been in Delhi at this time and there has been the exactly same commentary about doing something but nothing has happened. Last year I said that matches should not be scheduled in Delhi around this particular time of the year. Common sense should have prevailed, he further added.

Understandably, Coppell, a former Manchester United player and Manchester City coach, said he would have loved to play in better conditions.

“It’s not for sportsmen to say, it is a decision the health officials will have to make. If you ask me if I want to play in these conditions I would say I don’t think so.” Asked specifically if it’s safe for the players, he said, “I don’t know. I would have loved to play somewhere else in better conditions.”

Delhi’s viability as an international sport venue has been called into question lately. Just before the grievances raised by the Sri Lanka cricketers, there were concerns raised before last month’s Delhi Half Marathon which took place despite high pollution levels and an appeal by the Indian Medical Association to cancel the event.

The second day’s play in the ongoing cricket match was halted for 26 minutes after Sri Lankans complained of breathing problems forcing India captain Virat Kohli to declare the innings at 536/7. While the Indian side took the conditions in its stride with pacer Mohammed Shami on Day 3 of the match casually stated that they are “used to suffering” and did not want to make a big deal out of it, but by Day 4 Shami too was seen vomiting in the middle of the match.