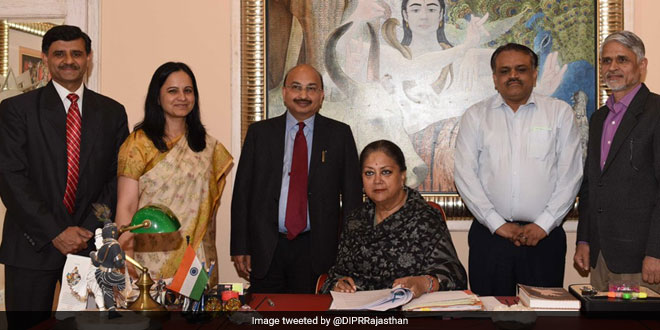 New Delhi: Rajasthan state government announced that it will launch a new scheme across the state’s rural areas to provide sanitary napkins to girls and women, free of cost. The announcement, which came during the state’s budget session in the legislative assembly, aims to ensure improved menstrual hygiene in the state. The Rajasthan government has allotted an amount of Rs 76 crore for the scheme. Delivering the state budget speech on February 12, Rajasthan Chief Minister Vasundhara Raje said that the sanitary pads will be distributed to all women between age groups 15 and 45, across schools, colleges, health centers and Anganwadis. This is a small yet significant step to break the shackles around menstrual hygiene issues that rarely get discussed, in public or in private.

Many schools and health centers in rural areas do not have sanitary napkin vending machines. Due to unavailability of sanitary pads, many girls are forced to drop out of school early, resulting in incomplete education. With this scheme, women can easily avail sanitary napkins and ensure menstrual hygiene, said a Department of Medical, Health and Family Welfare official, Government of Rajasthan.

National Capital Delhi also announced a similar scheme. The South Delhi Municipal Corporation (SDMC) on February 12 announced that sanitary pads will be provided to girls across all schools in South Delhi. The announcement was made at the occasion of presenting the civic body’s annual budget by Shikha Rai, SDMC’s Leader of the House. Ms Rai acknowledged how menstruation continued to be a taboo across households and free sanitary pads would help address the issue around periods. Ms Rai also said that teachers across SDMC schools arebeing sensitised about menstrual hygiene.

Menstrual hygiene remains a priority for SDMC as we are taking a two-fold approach to both sensitise people about its importance and provide sanitary napkins in all schools. The taboo associated with menstruation must be addressed and can only be successfully done when women have adequate access to sanitary napkins, said Puneet Goel, Commissioner, South Delhi Municipal Corporation.

A 2017 survey conducted by the World Health Organization declared that 67 per cent women in India still have to borrow sanitary pads during emergencies as the stringent clause of confidentiality surrounding menstruation makes it hard and uncomfortable for women to venture out and purchase sanitary napkins. As per the national family health survey, 62 per cent of India’s menstruating use cloth instead of sanitary napkins, which compromises their health.

Over the last few months, India has seen a sustained campaign to increase awareness on menstrual hygiene and address taboos that exist around the issue. The release of Akshay Kumar’s movie ‘PadMan’, based on social activist Arunachalam Muruganatham who manufactured low-cost sanitary napkins, aims to bring the discussion around menstruation to a more mass audience. The release of the film was preceded by the #PadMan Challenge, initiated by Muruganatham, in which several celebs participated posting pictures on social media holding a sanitary pad and stating that there is nothing to be ashamed of about periods. Miss World Manushi Chillar has also been vocal about the existing 12% GST on sanitary napkins and the need to address the issue of menstrual hygiene. Rajasthan and South Delhi’s announcements is a big boost to the ongoing campaign on advocating menstrual hygiene for millions of women in India.

Goa To Construct 70,000 Toilets In Villages Within Wildlife Sanctuaries