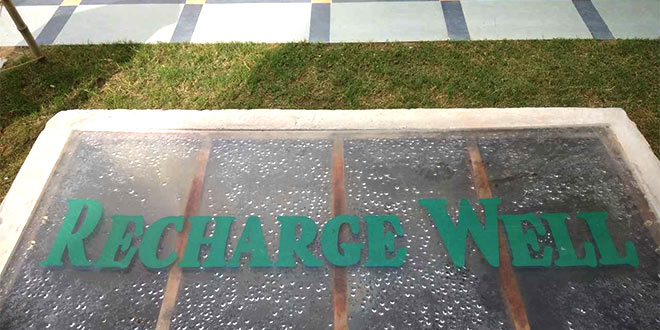 What does an average day at work consist of? A nine-hour shift, two-three light meals and loads of work. Even before we know it, on a daily basis, we generate significant quantities of dry and wet waste inside our workplaces. From throwing leftovers from our plates into the dustbin to disposing of used plastic bottles, casual waste generation in office spaces is quite common and as it happens with waste generation, what happens post disposal is often not cared about. The Centre for Science and Environment (CSE) office in Delhi is an office with a difference. In the last 15 years, it has successfully become waste neutral in its operation.

Situated in the heart of South Delhi in Tughlakabad, Centre for Science and Environment is one of the country’s most well-known public interest research and advocacy organisation, specialising in environment and development related issues. Advocating for waste management since its inception, CSE has ensured that both solid waste, as well of wastewater is treated with precision inside the office premises at minimal cost, thus ensuring that waste is not disbursed outside to cause further pollution. The success of the waste neutral model adopted by CSE is not restricted to just placing colour coded dustbins around for waste segregation, the CSE office has implemented several waste management techniques to ensure minimal waste generation and maximum waste treatment.

Paper waste generation in office spaces is common and CSE is no exception. Being a research organisation, solid waste like plastic and paper in CSE premises can be found daily at significant levels across all verticals. Instead of gathering the waste altogether and handing it over to the municipality, CSE had tied up with a local organisation called Extracarbon to channelise the waste further for recycling. CSE handovers its waste paper, plastic, metals and glass periodically to the waste management organisation, in exchange for stationary. The exchange is an effective one, ensuring that solid waste goes into the right hands and office stationery is acquired at cost-effective rates.

A walk around the CSE office campus could often be mistaken for a walk around a healthy and flourishing garden, as trees adorn the space outside the building.  Trees are a part of the crucial in-house waste management programme, that of wastewater treatment. Costing roughly Rs 2.5 lakh, the highly effective system treats wastewater generated daily inside the CSE premises and post treatment, also reuses the treated wastewater within the premises to maintain greenery.

If we are extracting the groundwater, we are making sure that we replenish it by recharging aquifer. We are trying to compensate for usage of groundwater by maximising local reuse of treated wastewater, said Dr Suresh Kumar Rohilla, Programme Director, Water Management, Centre for Science and Environment.

CSE operates on a slope mechanism, flowing from top to bottom to ensure proper microbial movement, and does not require any mechanisation until the end stage. Wastewater treatment consists of four stages at CSE. Sludge is arrested in the Settler chamber and particles in the water are digested. The biological oxygen demand (BOD), which at that stage is around 130 mg/l is reduced to about 70 mg/l. To reduce the BOD level further, nutrient hungry plants have been planted across a horizontal area in the campus, which stand only on pebbles and semi-treated wastewater and no soil.

Finally, the Vortex, a lengthy cylindrical structure is powered for an hour daily to oxygenate the water and bring the BOD levels to a permissible 10 to 20 mg/l. Nearly 8,000 litres of usable wastewater is produced daily by CSE by this mechanism. A similar model has been installed at the Delhi Jal Board (DJB) office and has been functional since 2015, treating wastewater in the DJB premises. 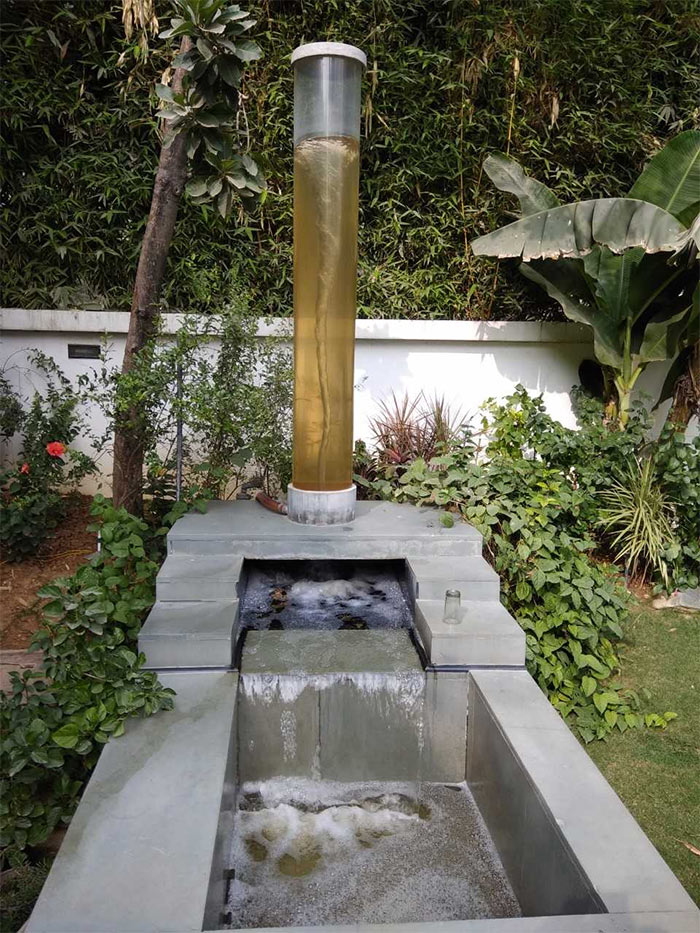 The system has been designed in a manner to ensure maximum effectiveness. The water that is obtained post treatment is used by us in our gardens, though most of it is released underground. Urban spaces have several requirements for water and treated wastewater can be utilised for many purposes like washing of streets, construction, etc, said Dr Rohilla.

Even rainwater from rooftops is not spared at CSE. Following the organisation’s firm belief of nothing should go to waste, water from rooftop trickles down into a desilting pond, filled with aquatic flora and fauna. Excess water from the desilting pond flows into a recharge well. Rainwater from unpaved surfaces is arrested in the network of 13 recharge pits and from the paved surface into recharge trenches which helps to replenish the groundwater level. Thus 3,66,600 litres of rainwater (60% of total) is harvested annually in the campus 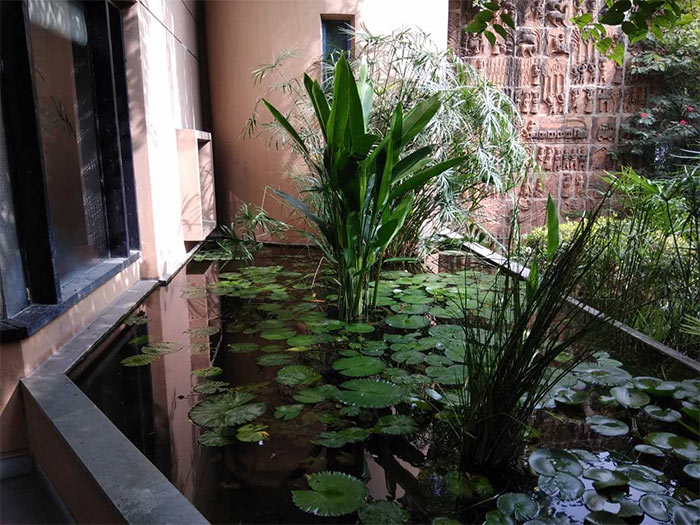 The desilting pond collects wastewater from rooftops, flowing into a recharge well

On The Spot Composting

The CSE canteen on the top floor is one of the busiest spots in the office. Food for around 200 people is cooked daily, and such a large scale operation naturally leaves behind a significant amount of waste of waste(18-22 kgs) in the form of vegetable peels and pieces. CSE due to space constraint shifted from traditional composting to an automatic composting machine which has been installed inside the office premises, which composts all the food waste and horticulture waste from the CSE campus and turns it into manure. The manure is then used within the CSE premises, serving as a nutrient to the plants in the campus. 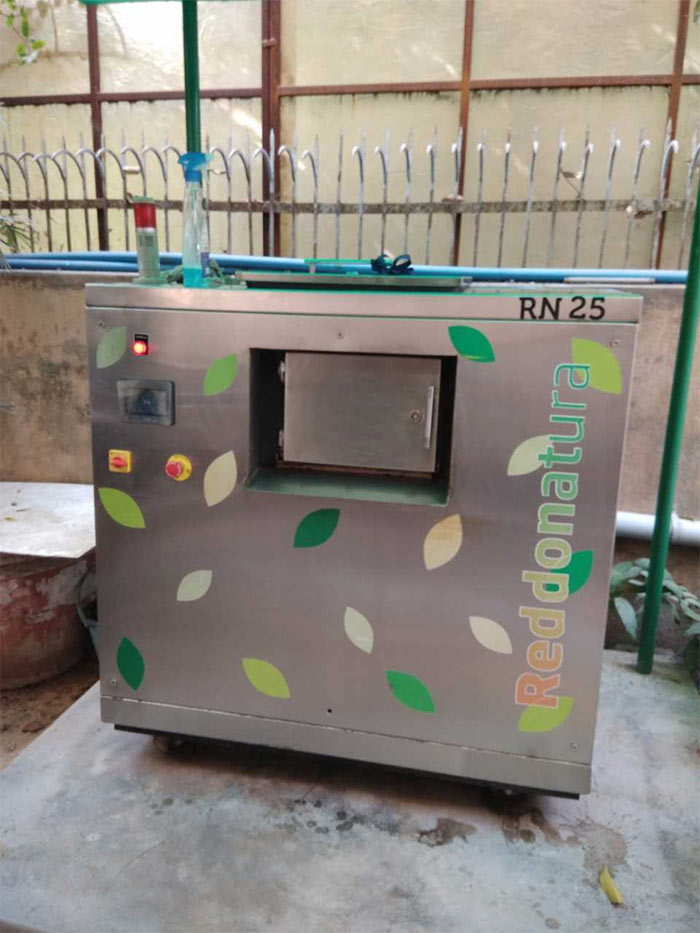 The Effectiveness of an All Round Mechanism

Waste in office spaces is an often neglected and forgotten problem, beginning and ending with disposing garbage into a dustbin. Even if solid waste is treated in some office spaces, sewage water is flushed away happily, often considered to be a problem to be dealt with by local authorities. CSE’s all-round waste management mechanism, ranging from solid waste management to wastewater treatment ought to be considered an example for offices to follow. What makes the CSE model an ideal one is the minimal expenditure required to keep it functional, and the positive impact it continues to have on the environment around.

Related Topics:
Center for Science and Environment Recycling Waste Management
Up Next