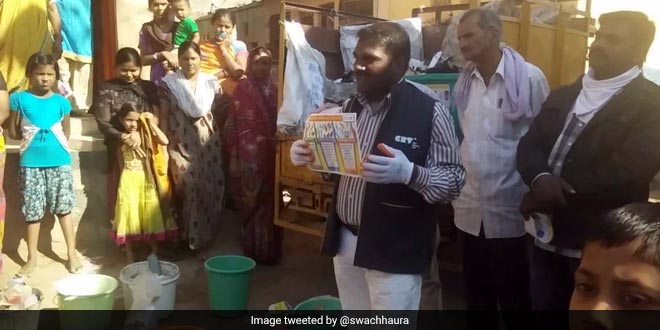 How waste will be treated has become a topic of contention between the civic body and waste management experts in Aurangabad. The tussle between segregation and collection is becoming the highlight of city’s waste scenario. Aurangabad generates nearly 300 metric tonnes of solid waste every day. Waste management in the city has been historically poor and instances of tiny garbage dumps and overflowing dustbins are a common sight in Aurangabad.

Like other metros, Aurangabad Municipal Corporation (AMC) too propagated waste segregation with the introduction of the two bin system (one for wet waste and the other for dry waste) on the occasion of World Environment Day in June. Segregation, however, has not caught on in the city. A survey conducted by the civic body in September declared that only one of the six zones in the city had segregation rate above 80 per cent. The rest had segregation rate below 50 per cent and that has worried the civic body officials.

Despite following the usual procedures of distributing colour coded dustbins, segregation has not really caught on in the city. Zone Six, the northern-western zone of the city currently has a segregation rate of 80 per cent. AMC says that the area is financially better off than others, which is why a number of apartments practice segregation at a residential community scale, making it easier to segregate waste. Individual households have not shown high interest in segregation, because many still prefer collating everything together and disposing it in a single dustbin. The municipal body’s inability to make people understand the benefits of segregation has resulted in the current scenario.

Though we have tried holding workshops and spread more awareness about segregation, people still do not adhere to the segregation rules. We are planning to resort to more creative awareness programmes which will help people understand the importance of segregation, said D.M Muglikar, Municipal Commissioner, Aurangabad Municipal Corporation.

To make up for the lack of segregation, the municipality has ensured daily collection of garbage from households by workers affiliated to the AMC. But the over reliance on garbage collection has not been taken well by a few local waste management NGOs, who have discussed the issue with the civic body. They are of the opinion that making people reliant on garbage collection and not segregation defeats the whole purpose of urban waste management.

The whole point of beginning a segregation drive was to ensure that people segregate waste, hand it over to waste collectors who can then send it to waste recycling plants. If garbage is directly collected from people without them realising the importance of segregating, the urban waste problem will never be solved, said Akshay Mirashi of Civic Response Team, a team of waste experts that partners with the civic body occasionally to manage waste problems in the city.

The focus on segregation is important, but is yet to catch on among people. That is why garbage collection is something we wanted to focus on more till people take on segregation properly. Because taking drastic steps like not collecting unsegregated garbage will only result in people dumping it on the streets, said Mr Muglikar.

In contrast, waste management experts are also of the opinion that garbage collection results in expenditure of money and labour, which can be ideally utilised in training people in better waste management techniques and waste recycling. The three Rs of waste management – reduce, reuse, recycle get negated when garbage is being collected from the doorstep with the people having no idea what happens post collection.

The municipality’s stressing on day-to-day waste collection is understandable as it looks to better its ranking in the 2018 edition of Swachh Survekshan. The city ranked a low 299 out of 434 cities in terms of cleanliness in the 2017 Swachh Survekshan, But if segregation is not implemented properly, the issue of urban waste will only become a more difficult one to tame. A meeting has been scheduled in the third week of November regarding this matter and both the civic body and waste management experts in the city will have to come to a consensus to ensure that while garbage collection continues in the city, waste segregation is adopted by the population to ensure complete and scientific disposal of waste.