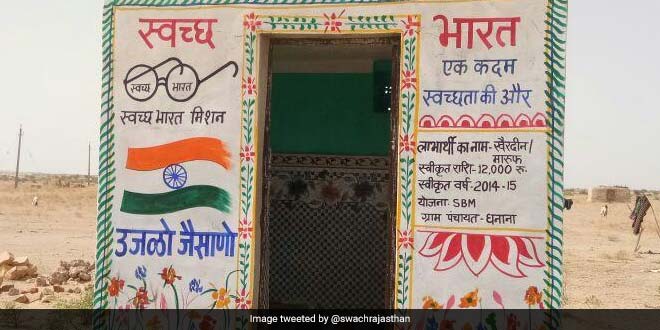 New Delhi: Even two years back till 2016, Rajasthan’s Dungarpur, known to be the state’s southernmost district had a woeful percentage of just 2 per cent of its 13 lakh strong population using toilets. Scarcity of water, and age-old habits of defecating in the open had triumphed over rationality for residents of Dungarpur, till the women of the district took it upon themselves to build toilets across the 900-odd villages in the district. The district’s sanitation coverage today stands at 100 per cent, a number which will soon be replicated by the whole state. All of Rajasthan’s 33 districts have become open defecation free (ODF)

Rural Rajasthan’s ODF day comes much earlier than the national deadline of October 2019. Even the problematic districts of Alwar, Barmer, Karauli and Udaipur have self-declared themselves ODF, stating that villages in these districts are wholly covered by household toilets. Rajasthan’s Swachh turnaround has been nothing short of miraculous, given that in 2014, the state’s sanitation coverage was at 29.74%. A traditionally arid state, water scarcity in Rajasthan had been a major barrier in the initial days of implementation of Swachh Bharat’s objectives. Between 2014 and 2017, nearly 31,000 of 56,700 habitations which had no piped water supply were covered. According to Arushi Ajey Malik, Director, SBM Gramin, Rajasthan, piped water supply played a big role in the state’s ODF success.

The increase in the number of households with piped water supply has been instrumental in Rajasthan’s rapid success in several districts becoming ODF within a span of three years. The district administration has in turn ensured that people use these toilets regularly. Hence, the state’s ODF numbers have seen such positive turnaround, said Dr Malik.

76.46 lakh toilets have been constructed in Rajasthan since 2014, the highest among all Indian states. Along with 33 ODF districts, 188 urban civic bodies out of 191 have been declared ODF. Several initiatives mark Rajasthan’s success in achieving this milestone. In the district of Barmer, the collector announced that families constructing toilets and encouraging others to do the same will get a chance to sip a cup of coffee with him. In Kota, the district administration roped in the local police department who went from village to village to counsel people on the benefits of constructing and using a toilet. Dr Malik feels that such efforts helped increase consciousness among people to build and use toilets.

“People in rural Rajasthan had several concerns when it came to toilets. How will they maintain them, what could be the potential cost of building and using a toilet etc. were some of the questions pertinently present across villages. Individual district administrations successfully resolved their queries and motivated them to practice safe sanitation,” says Dr Malik.

What next for Rajasthan? Despite nearing an overall ODF status, the job remains half done for the state. The biggest challenge for Rajasthan will be to ensure that ODF villages sustain their ODF status and the practice of open defecation is completely eradicated. And this will have to be done without any form of coercion, an allegation the state has been facing since the implementation of the Swachh Bharat Abhiyan.

The state’s health and sanitation department has said that it will use the remaining year and a half to ensure the ODF districts adhere to practices of safe sanitation. The state remains confident that if it could successfully increase sanitation coverage from 29.74% to 100% within four years, it will be able to sustain the sanitation miracle as well.

Odisha Aims To Cover 100% Of Its Households With Toilet By End Of 2018: Official