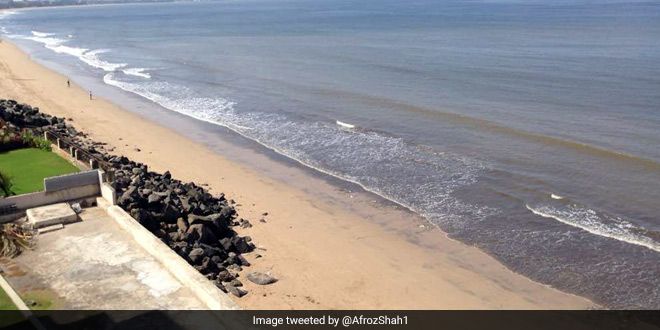 New Delhi: As Mumbaikars gear up to celebrate the biggest festival of the year – Ganesh Chaturthi, the city’s green crusaders plan to ensure that the Versova beach, which recently became the cleanest beach in the city after five million kilograms of filth, plastic and garbage was cleared by the locals, remains clean during the 10-day festival. Like the mega cleanup of the beach, this time round too the swachh effort at the beach during the Ganpati festival is being led by the 33-year-old lawyer from Bombay High Court, Afroz Shah.

Speaking to NDTV he said, the Brihanmumbai Municipal Corportaion (BMC) is doing their bit to maintain Swachhta in Mumbai, but, we as dedicated Swachh Warriors, have decided to support BMC. We want Versova to maintain the cleanliness tag.

The Ganesh Festival Plan Of Action

We will keep 30-40 handcarts ready. Once the visarjan takes place, we will collect the idol, put it onto our handcarts and take it to an area where the BMC people will be waiting for us along with their earth moving machines and tractors in order to take the idols away from the beach, added Afroz Shah.

Also part of the plan, the flower waste collected from the beach will be used for the purpose of composting, whereas, plastic waste will be sent for recycling purposes.

Talking about the main immersion day plan on September 5, Mr Shah said, “On 5th September night, the mass Ganpati visarjan will take place, on 6th September, we start mega cleanup at Versova from 6am. Many schools will join us, there will be around 600 students along with many other Swachh volunteers, all for one cause and one motive – cleanup Versova completely.”

Also Read: Inspired By The Versova Cleanup Model, Centre To Launch A Similar Programme For 13 Other Beaches Across The Country

We want to see you fit and pure soon .Get well and free from plastic .

The Swachh Versova beach, located in the western suburbs of Mumbai, is the result of a year-long community effort, Mr Shah who spearheaded this world’s biggest beach cleanup was also awarded with the UN’s top environmental accolade — Champions of the Earth award. Now, he wants to replicate his effort across all 19 beaches of Mumbai.

In A First In India, Thane In Maharashtra To Start Recycling Thermocol Waste

Made From Recycled Paper, These Ganesh Idols Are Safe Environmentally To Immerse In Water Bodies