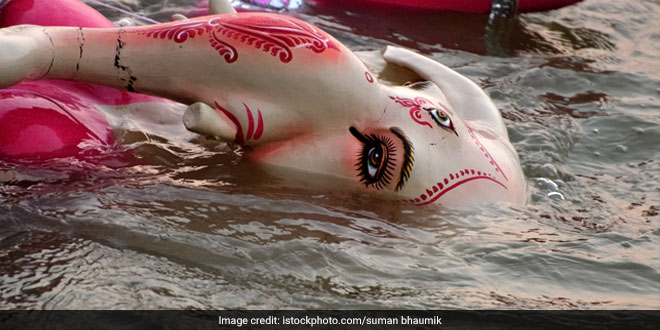 New Delhi: In a first, diamond city – Surat, in an attempt to protect one of its major natural resources from further pollution, has banned the immersion of Ganesh Idols in River Tapi after ten days of extravagant celebrations during Ganesh Chaturthi. The city Police along with Surat Municipal Corporation announced the ban on Saturday. Talking to NDTV about this big move, City Police Commissioner Satish Sharma said,

“As per the National Green Tribunal guidelines that have been sent to the State Pollution Control Board, the immersion of Ganesh Idols made from Plaster Of Paris in any of the natural resources is prohibited. Along with Plaster of Paris, idols that are painted using chemical colours are also prohibited for immersion in any of the natural resources. Keeping these guidelines in mind, we have announced the ban on immersion in River Tapi.”

Highlighting about the alternative arrangements that have been planned out for the biggest festival of the year – Ganesh Chaturthi, a senior official from the Municipal Corporation added,

“Last year, as per our data, around 60,000 Ganesha idols were immersed in the city. This time too, we expect the same numbers, so to adhere to the pollution guidelines, we have arranged for setting 17 artificial ponds across the city. Moreover, we have been organising awareness campaigns and guiding people to use eco-friendly alternatives to Plaster of Paris idols, opt for smaller Ganesh Idols rather than the big ones and why they should immerse the idols in the artificial ponds and not the river bodies. We have also got in touch with some of the NGOs to help with the eco-friendly alternatives to traditional idols so that people can choose the green option easily.”

As per the data provided by the Municipal Corporation, last year, 30,000 Ganesh idols were immersed in the 11 artificial ponds created by the civic body. This year, in order to cater larger numbers, the municipal corporation has added 6 more artificial ponds in the city. Mr Sharma asserts,

This year, we have increased the number of artificial ponds so that even if the number of idol immersion goes above 60,000, the city is well prepared. Surat is the only major city in the state to have been blessed by a perennial river, but the river is slowly dying due to excessive pollution. To save one of our natural resources, we have taken this step first time in the history.

Stressing on the penalty associated with the ban, Mr Sharma added,

“People who will not obey the ban in the city will be booked under Section 144. According to that if a person violates the rule of the ban then he/she can face imprisonment of one month and a fine of Rs 200.”