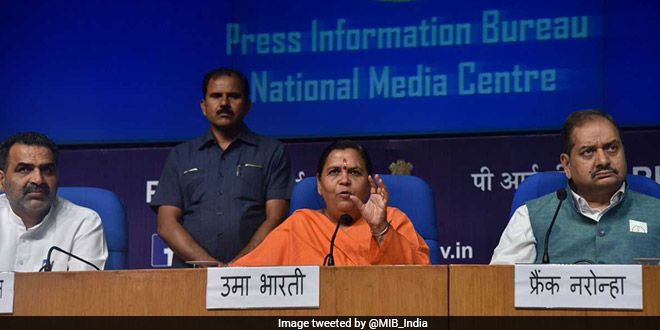 New Delhi: Union Water Resources Minister Uma Bharti on June 19 said a law to protect Ganga river will be brought in only after thorough consideration and refused to comment on the penal provisions in the draft statute.

“We are minutely studying the draft law. It is a wonderful legislation drafted by Justice (Girdhar) Malviya. But it will be brought in the public domain only after thorough examination of all its aspects,” Ms Bharti told reporters.

“It will be premature to comment on the provisions of the proposed law,” she said.

The government had formed a committee led by Justice Girdhar Malviya (retd) in July last year to prepare the draft Ganga Act. The committee submitted its report to the Ministry for Water Resources, River Development and Ganga Rejuvenation on April 12.

Ms Bharti said the law was necessary to protect the holy Ganga.

The Ganga is among the 10 most polluted rivers in the world. A law is needed to preserve it and ensure its uninterrupted flow, she said.

She said the river’s most polluted stretch was in Kanpur, and her Ministry had been discussing with the Uttar Pradesh government to shift Kanpur’s industry — majorly tannery — out of the city.

"Meeting with UP govt next week on shifting tanneries along the worst-affected stretch of #Ganga " – Union Minister @umasribharti pic.twitter.com/uFhq7OqCaE

There is a meeting (scheduled) in this connection with Uttar Pradesh officials in the next few days. Industry and livelihoods associated with it are important, but the river cannot be allowed to die like this (due to effluents), the Minister said.

Ms Bharti ruled out shutting the crematoria along the Ganga, as also barring the practice of ‘asthi visarjan’ (immersing ashes of the dead) into the Ganga.

The practice of ‘asthi visarjan’ will not be stopped. This is not just a tradition but also necessary for the fish, the Minister said, adding, we are not going to shut crematoria along the river bank. But we are going to repair and rejig the old ones.

She said 200 engineering students from colleges along the river have been enrolled for extensive bio-technical study of the Ganga from Gangotri to Ganga Sagar.

Each group of two students, accompanied by volunteers from Nehru Yuva Kendra and Ganga Vichar Manch, will extensively study a stretch of about 25 km each. These students will also interact with the local residents to study the social impact of the Ganga on their lives.

These reports are likely to be available by September-October. Then we will know every inch of the Ganga firsthand. These students will compile their observations. We could have employed other methods, but I think this will be the closest to reality, Ms Bharti said.

She said it will take at least 10 years for the Ganga to regain its old glory.

On the Yamuna’s revival in Delhi, Ms Bharti said at present “not a drop” from Haryana’s share of water can be taken away to release into the Yamuna, but her Ministry has given Delhi Jal Board around Rs 1,500 crore for various sewage treatment projects.

Also Read: From Water Saving Zones To Rs. 100 Crore Fines, Here Are Some Of the Salient Features Of The Proposed National River Ganga Bill 2017