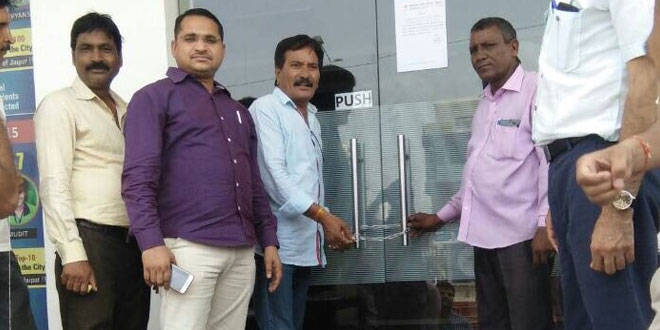 When Rajasthan Chief Minister Vasundhara Raje launched the ‘Dispersion of Waste at Source’ initiative on World Environment Day in the pink city, the Jaipur Municipal Corporation (JMC) implemented it in an aggressive way. The degree of seriousness towards practicing waste segregation by the civic body is evident as it recently sealed five coaching classes of the city for not implementing the two bin system. Notices were served to these training institutions to install blue and green dustbins on Sunday.

From last 4-5 days, the JMC has been conducting surprise inspections in various markets, shops, trading areas, coaching institutions and other such places to check whether green and blue coloured dustbins are installed in these public places. The inspections are expected to go on for the next 30 days.

These inspections are carried out as a part of the Swachh Bharat campaign. Since the announcement of waste segregation on June, nearly 80-90 per cent of the areas have been covered with two colour bins. We aim to reach the 100 per cent mark by July, Naveen Bhardwaj, Deputy Commissioner of Health told NDTV.

On June 18, the JMC officials including Mr Bhardwaj, Revenue Officers of Mansarovar, and Vidhyadhar Nagar – Naman Sharma and Chagan Lal inspected five coaching centres including Aakash, Allen, and Aasha. Classes where there were dustbins were either overflowing or were in shambles. The coaching centres are sealed for three days.  However, a day after the action was taken, green and blue bins were installed by all the coaching centres as per the JMC norms.

It was shocking to discover such unclean and unhygienic conditions at educational institutes. Even slum areas are equipped with two colour bins, said Mr Bhardwaj.

The action taken under the Swachh inspection spread like a wild fire and dustbins were swiftly installed in market areas of the city, adds Mr Bhardwaj.

The civic body has been taking strict actions against those who are not following the waste segregation norms. From serving notices to imposing fines upto Rs 2,000 the JMC is sending out clear warnings to those not abiding by the Solid Waste Management Rules, 2016.

In terms of using plastic bags, a team of civic body is regularly carrying out checks in all the shops and are discouraging shopkeepers to use plastic bags by seizing them, “We are distributing jute or cloth bags in all five zones of the city and urging people to switch to non-plastic items,” concludes Mr Bhardwaj.

It Will Take 10 Years To Clean Ganga: Uma Bharti